A Year of Queer on ‘Steven Universe’

On March 12th, 2015, the two-part season one finale of Steven Universe aired. “The Return” and “Jail Break” quickly made waves for a number of reasons.

Top of the list was the grand reveal that main character Garnet was in fact a fusion of two Gems, Ruby and Sapphire. The pair loved each other so dearly that they refused to be apart, and used their love to lay the smack-down of the century.

Openly lesbian couples are still a rarity on television, let alone children’s television, so Ruby and Sapphire are a true landmark for queer representation. This last year of new episodes has proven that they’re only the tip of the show’s iceberg when it comes to breaking down barriers of gender and sexuality. The Steven Universe writing team has also brought us…. 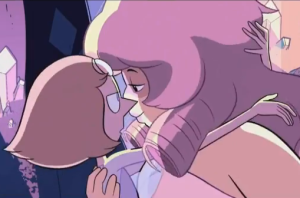 It was never a secret that Pearl idolized Rose Quartz, but this last year has made it clear just how deep that love goes – and how sometimes, it doesn’t always take her to the healthiest of places. We saw Pearl dreaming of sailing into the sunset in Rose’s arms, flashbacks of her repeatedly risking her own life in battle for her, and a fusion, though motivated out of jealousy, that sure brought us some sweet dance moves.

The relationship between Garnet and Pearl went through some… um, turbulence, to say the least. Pearl grappled with self-esteem issues while Garnet grappled with a deep, personal betrayal, but ultimately, they came out the other side with a greater understanding and respect for each other. No matter the fallout that came after, I think we can all appreciate their beautiful Sardonyx fusion dance.

Amethyst has also been dealing with self-confidence issues. She and Pearl have been able to find some common ground since opening up and getting honest with each other in “On the Run”, which has manifested in a year of casual compliments, touches and emotional support. The progress of their relationship culminated in “Log Date 7 15 2”, with Opal’s seamless and highly anticipated fusion dance. 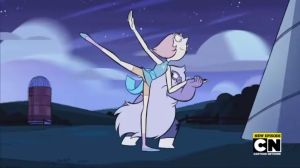 “Man in a dress” is an ugly comedy trope, one which often belittles femininity and spreads misconceptions about trans women. Thankfully, “Sadie’s Song” proved that the trope can be used not just to punch down, but to empower. In the face of Sadie’s honesty, Steven takes a look at the rose-topped heels and midriff-baring outfit and realizes he wanted to do the dance himself all along. His onstage entrance is met with wild applause and support from the Beach City audience. The only questionable part of the episode is how in the world he got his eyeliner on so quickly. 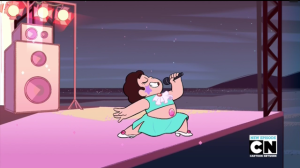 Peridot’s main focus of growth has been in the “learning not to destroy the Earth” vein, but in the process, she seems to have stumbled upon her first crush in the form of Amethyst. She also couldn’t help but be flustered when Garnet asked her to fuse, but who can blame her? Of course, nothing will eclipse her true loves; alien-print boxers and her OTP, Percy/Pierre. The show rarely touches on guy/guy romances due to the predominance of the ladies, but it was reassuring to see a slash-ship so instantly embraced by one of the characters.

But let’s end on the Queen of Queers herself, and the two little lesbians who make her up: Garnet, Ruby, and Sapphire. 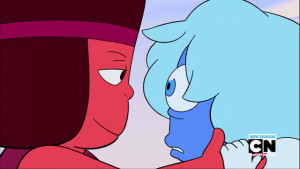 The Crewniverse wasted no time after “Jail Break” aired confirming that Ruby and Sapphire’s relationship was indeed romantic in nature, but tt wasn’t long until “Love Letters” made this explicit in-show, as well. While Pearl praised them as “the perfect relationship,” we nonetheless got to see the two struggle through a deeply personal argument… before making up in the most adorable way possible.

But in Garnet, Steven Universe also brought the chance to explore the real-world issue of homophobia through the metaphor of fusion. In the present, we see Garnet facing Homeworld discrimination for her nature of a permafusion; Whether it’s Jasper calling her a “shameless display”, Peridot “politely” asking her unfuse so she can be more comfortable, or seeing the terrible abominations of the forced-fusion experiments. In “The Answer”, we saw how Ruby and Sapphire first met and fused… and how they were immediately marked as outcasts because of it. Garnet gave a short speech which resonated with queer viewers around the world; 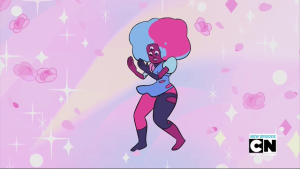 Ultimately, however, one of the things which makes Steven Universe so powerful isn’t just the quantity of the representation it presents, but also the quality. It presents diverse characters with little fanfare or back-patting, allowing them to naturally take center stage, normalizing their existence. It provides powerful allegories for real-world discrimination, while not erasing members of those oppressed groups in the process. It weaves its lessons into the story with subtlety and grace, allowing the lessons speak for themselves. It warms my heart, thinking of the many children– and adults– who will get to see themselves reflected on the screen as they may never have before.