Saddle Up for Denmark’s ‘The Salvation’

Are you a fan of westerns?  Or perhaps a fan of the Danish sensation that’s sweeping the nation known as Mads Mikkelsen?  If you answered yes to either or both of these questions, then have I got a treat for you!

The Salvation is a Danish film starring Mads Mikkelsen, Jeffrey Dean Morgan, and Eva Green.  In the trailer Jon (Mikkelsen), a Danish soldier who came to America in search of a new life, brings his wife and son to their new home only to have them kidnapped and murdered by a bandit.  Jon seeks revenge and kills the man responsible, which incurs the wrath of the man’s brother, Delarue (Dean Morgan), and his widow, Madelaine (Green).  A bloody war begins as a result. 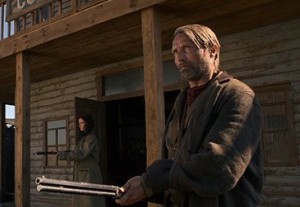 I am extremely excited for this film!  I have been a huge fan of westerns since I was a little kid, and this story is right up my alley.  I mean, who doesn’t love a good, old-fashioned bloody tale of revenge?  As a fan of Mads Mikkelsen, it’s going to be a real treat to see him in a persona entirely different from his infamous alter-ego on NBC’s Hannibal.  He didn’t speak much in the trailer, but his face conveyed the sorrow and rage of his character so perfectly that words seemed superfluous.  If you’ve only been exposed to his talents as Hannibal Lecter, I encourage you to take a look at some of his works from the big screen.  The lovely Angel K did a series where she reviewed a number of his films.

But wait: Mads isn’t the only reason to be excited about this film!  Jeffrey Dean Morgan plays the villain, which I think is fantastic.  He has such a rugged look about him that seemed to be made for this kind of film.  It baffles the mind to think that he hasn’t starred in a western before.  The

shot in the trailer where the camera circled around Delarue as he stood in the middle of a circle of townspeople was easily my favorite shot of the trailer.  It was such a great establishing shot for this villain, and I can’t wait to see more of him.  Eva Green, as always, never fails to take my breath away with the intensity shown in her face.  Like Mikkelsen, she is able to emote very well, and I’m eager to see how her role in this story will develop.

As of right now, there is no official US release date, but one can only hope that will change if the film does well at the Cannes Film Festival.  Given his popularity in America, Hollywood would be beyond foolish to pass up a release of such a promising film starring Mr. Mikkelsen.

What are your thoughts on this trailer?  Are you in it for the genre, the star(s), or a mixture of both?  Comment below and thank you for reading!