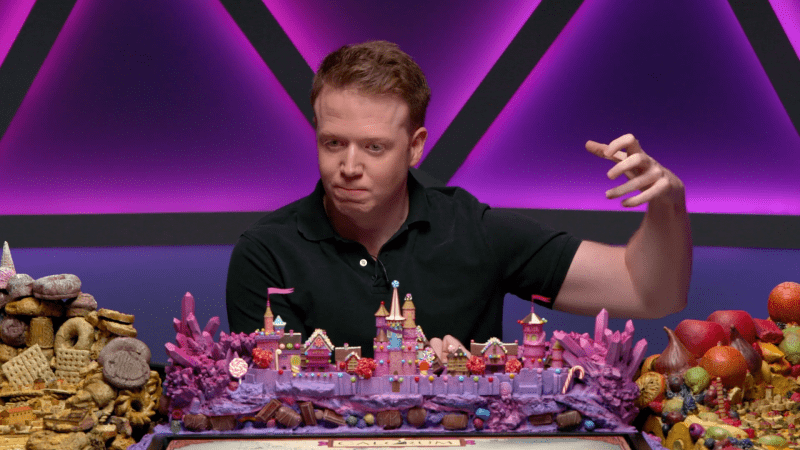 As we know by now, ‘Safe Harbor’ was anything but. We’ve never had an episode like this, and as good as it was – and this was a good episode – I’m not sure my heart can take much more.

After a full combat episode, we usually have a character-building episode full of role-play and character development. Big combats get their own episodes with elaborate sets. That’s why the end of ‘Safe Harbor’ came as such a shock.

I know I keep mentioning that Dungeon Master Brennan Lee Mulligan said he wasn’t playing fair this season, but I still keep being surprised by it.

Let’s start from the beginning. Last time the Candians managed to commandeer a ship to escape the murderous (and now dead) Lord Stilton’s bleu cheese men at arms, and the only friendly casualty was one of Captain Annabelle’s sailors. Even Primsy Coldbottle lived.

Of all the surprises this season, the change in Primsy is one of the most delightful. The Rocks princesses (whoops, the Rocks bastards) have been taking the timid Dairy Islands duchess under their collective wing. Coaching her that she’s a “strong independent woman” has been something of a running joke.

Now, back from the edge of death, Primsy is no one’s joke. She always had a head for politics, and with her eyes opened by Stilton’s betrayal, she’s showing some very welcome spine. I love that Primsy didn’t just swear friendship with the Candians and pledge to fight the good fight with them. Instead, she started looking for ways to get the Candians back into the Concord which would prevent war altogether.

It’s a good plan, too: find out what happened to Amethar’s first wife, Catherine Ghee, and get that marriage annulled if necessary. That would free him to remarry Caramelinda and legitimize the twins again.

Primsy and Annabelle bring up another interesting point: adultery isn’t a crime that can get someone excommunicated. Even if it was, the Concordant Emperor named Amethar his successor and the Church has no authority to revoke that. Whether the church likes it or not, Amethar is the true Concordant Emperor.

We know that Pontifex Belizabeth Brassica had assassins lined up to take out the Rocks family before anyone could bring that up. Still, I can’t help but wonder if this could have been avoided if the Rocks royal family was just a little more politically savvy.

That lack of political savvy – or even the interest to fake it – is really starting to dig at me. It was very obvious in ‘Safe Harbor’. The Rocks royal family just doesn’t seem to be interested in paying attention to the larger picture. They joked through Primsy’s attempts to tease out what had happened, went on sidebars about how murdering a certain carrot is their primary goal, and insulted potential allies left and right.

It’s scary. Jet and Amethar were the only two Rocks seriously trying to put in the political work necessary to cut the coming war as short as possible. Cumulus seems interested in protecting Candia’s magic at least, but he loses interest when other subjects come up. Theo’s political powers are limited to protection. I can’t help but worry about how ill-prepared these characters are to actually pull through a politics-heavy campaign.

One possibility occurs to me. Are the players being so careless because they’re anxious to get to their back-up characters? Is that necessary for the story to continue? Will any of the current cast make it to the end of the story? WHO KNOWS? I worry even more with this revelation that Candia and her magic just might be the only thing standing between Calorum and the end of the world.

In case that went over your head during the episode, it breaks down like this: one day the Hungry One will rise and come to devour Calorum. When that happens the Bulb will be able to defeat it once and for all. However, the Hungry One isn’t interested in eating “junk food”, so as long as Candia and other “junk food” people fill the world it won’t attack, and the Bulb can’t fight it. The Bulbian Church is therefore deeply invested in ridding the world of “junk food”.

Except – is Brassica really devoted to the Bulb? Her mentor, who invested her into the church, was executed because he refused to disavow the Hungry One. We have no idea where her ultimate loyalty lies. Theo (played by Brian Murphy) speculates that she’s working for the Hungry One.

Cumulus (played by Zac Oyama) counters this with the Order of the Spinning Stars’ belief that the Hungry One and the Bulb are both just power sources, not anything to be worshiped. His casual statement that he gets his power from the Hungry One was so, so poorly timed (the allies definitely look nervous) but it was an interesting addition to the complicated theological picture we’re starting to see.

I love those layers of complexity. In a silly world about food people, we have such a complex cosmology that there are a couple of good potential reasons for the Pontifex’s efforts to destroy Candia. Very cool.

Anyway, after a ton of exposition which was obviously too important to trim (did you guys notice how much ‘Safe Harbor’ ran over time?) the Candians made it back to Castle Candy. Amethar has to face the music with Caramelinda and she devastates him just as much as I expected.

What I didn’t expect were all these new layers to Caramelinda. She does magic? She was engaged to Lazuli? More importantly, she loved Lazuli like she’s never loved Amethar? My heart breaks for her. She’s trying so hard to make Candia prosper and everything keeps turning against her. Now she hears that her One True Love didn’t trust her with a major family secret.

Speaking of things turning against people, we’re going to have to talk about that final half-hour and the betrayal of Lord Calroy Cruller. Though my heart hurts thinking about it, this is one area where the promise Brennan made about not playing fair is most prominent. Calroy has had three weeks to set up his web of ambushes, so of course, it was going to be a tight net.

I don’t think anyone expected how many of the Rocks family would be caught in that net. For a moment there it looked like we were about to witness a TPK (total party kill), and by the rules of this season that would just be- it. The end. Everyone has other characters of course, but if everyone dies in the same episode how does that even work?

We didn’t find out, but we came close. Ruby and Amethar are both near death, and after two Nat 2s on her death saves Princess (Bastard) Jet is full-on dead.

Maybe everyone had a feeling one of the twins was going to die at some point, but ‘Safe Harbor’ seems either too early or too late. Seeing Jet killed in a single round was brutal and it felt deeply unfair. I know this season is supposed to be unfair, but this is really harsh.

It’s even worse when you remember that for once, Jet didn’t want to sneak out on this adventure. Ruby talked her into it. Now Jet is dead, and Ruby’s been left alone to live with that.

The characters shouldn’t have been in that lingerie shop to begin with, and I’m guessing that’s the justification for why they were able to be killed so easily. Still, I can’t help being a little mad that Jet was killed in one single round. It’s consistent with the setting, sure, and it was a deeply emotional scene that Brennan Lee Mulligan handled well, but… I mean, I guess this is more like Game of Thrones than we all thought. How can we get attached to these characters if they can be one-shotted?

Also, if water daggers are so hard to find why does literally everyone have them? Jet would have lived if Emily hadn’t had to make those rolls at a disadvantage.

I’m still watching, because as I said this was really well done. But ‘Safe Harbor’ is one of those episodes that makes me wonder if Crown of Candy is for me. I don’t want to get invested in all these characters if it’s going to end like Game of Thrones did. I don’t want the joy of the setting and the amazing role-playing to be ground beneath a chunky block of gritty realism.

I want to at least be able to hope that the Good Guys win, you know?

Now if you’ll excuse me, I have to go. I’m late for the Denny’s parking lot.