‘Deep Bleu Sea’ was a battle episode – combat from the beginning to just a few minutes before the end. It might seem like a full combat episode wouldn’t leave much room for character development or exposition, but a lot actually happened this week.

We pick up ‘Deep Bleu Sea’ right after Lord Stilton Curdeau’s ship the Dairy Air rammed the Colby. Curdeau had used his position as Duchess Primsy Coldbottle’s new husband to position his fleet as her escort, rather than her own ships. The Colby was sinking with no friendly ships in sight.

I want to take a second here to talk about the outstanding set work on A Crown of Candy. It’s always great, but in ‘Deep Bleu Sea’ it’s really something. We have:

It’s just one more example of the care Art Director Rick Perry and his team take with every episode. I think it’s probably harder than set design for movies in a way; after all, with an actual play show the action is somewhat chaotic. Sets need to be both detailed and flexible enough to fit into wherever the story takes the players.

But then, everyone involved in D20 takes their parts seriously. The cast members use even a long combat episode like ‘Deep Bleu Sea’ to develop their characters.

Liam was a bit violent in the last episode. This time he’s gone full-on War Guy. That Gloomstalker Ranger was an unexpectedly perfect choice for this fight. He has tons of attacks, picked the right favored enemy, and ignores difficult terrain. I couldn’t stop laughing during his turn when he kept saying, “Oh, and then I…” 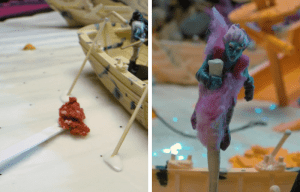 The real star of the episode is Zac Oyama’s Cumulus Rocks, a cousin of Amethar’s who had been missing for decades. Zac’s previous character Lapin died protecting the other players two episodes ago (on Zac’s actual birthday, no less!).

Luckily, these are all filmed together so it was still Zac’s birthday when Brennan pretended he didn’t have the right mini for a character and had Zac fly him in. He was definitely worth the wait. In one single attack, he took out three attackers who were threatening Jet.

He’s also advancing the plot in an interesting direction. It seems Amethar’s sister Lazuli may have put some things in place against the day Candia and her magic would be threatened by the Concord- which as you may have noticed is happening now.

So many things happened in ‘Deep Bleu Sea’, but that might be the biggest thing we saw this week. Yes, Duchess Primsy was just barely saved from her new husband’s assassination attempt. Of course, Annabelle Cheddar now owes the Candians a major debt and is probably going to help them. There is even the chance that with the Dairy Islands’ support Amethar could retain his throne legally.

But that’s all about the war we knew was coming. Cumulus’ arrival- which itself was so magical the Pontifex would have executed him on sight- signals a major change for Comida as a whole. Magic is coming back, whether anyone likes it or not.

And if they don’t, well- the Hungry One must feed.

Did you miss ‘Deep Bleu Sea’?

You can catch up with A Crown Of Candy (and all of Dimension 20) over on DROPOUT!