Dimension 20: A Crown of Candy Episode 7 Review – Escape From The Bulb Creeps 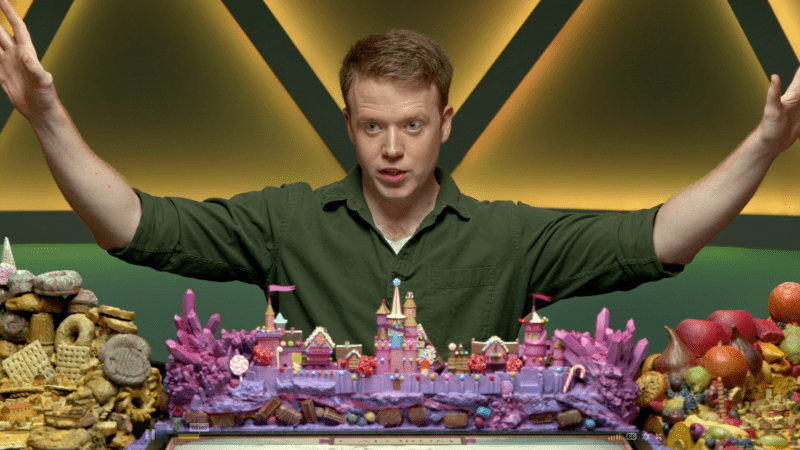 A Crown of Candy has been non-stop intense these last couple of episodes. ‘Escape From The Bulb Creeps’ finds a strange yet welcome balance between maintaining the constant tension and giving us a few breaks for laughter- and as is tradition, it’s ended on a wicked cliffhanger.

Before we dig into ‘Escape From The Bulb Creeps’, a moment of silence for Zac Oyama’s character Chancellor Lapin Cadbury, who died on Zac’s actual real life birthday. Seeing that empty place at the table stings. It’s worse than when Ally’s character died in Fantasy High: Sophomore Year because we know death is final in this game. 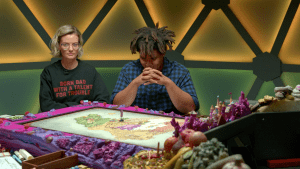 Ruby and Amethar (played by Siobhan Thompson and Lou Willson) look like that empty chair hurts them as much as it hurts me.

Another moment of silent weeping for Peppermint Preston. He was (unavoidably!) left behind in the rush to leave, and Liam feels him die in the first minutes of this episode. We already knew from the last Adventuring Party that he was dead, with no chance of coming back.

Rest In Sweets, Lapin and Preston.

Now that we’ve addressed the elephant NOT in the room, let’s get to the episode itself.

One thing I really enjoyed about ‘Escape From The Bulb Creeps’ was also the first thing to happen. It opened in media res as the characters were still running from the fight at the Cathedral where Lapin and Preston died- then Dungeon Master Brennan Lee Mulligan did something really cool. He took some time with each character for them to have a flashback to some part of their past which they were thinking about as they ran.

Of course Liam’s memory of being given Preston by his father hit a little hard. We already knew Liam had few friends growing up in House Jawbreaker. Now we see that Preston wasn’t just a friend but also a rare sign of parental affection (from his 35 parents and partners-of-parents, because polyamory is casually common in the Great Stone Candy Mountains). The pig was also given to Liam on the day he found out he would be allowed to be a “ward” AKA political prisoner at Castle Candy.

Basically, Preston was with him the whole “good part” of his life, living away from his bullying brothers and allowed to hunt seeds to his heart’s content. Now he’s gone and Liam is a War guy. Rip my heart out, why don’t you?

I love that Ally Beardsley took this opportunity to shift Liam to a gloomstalker ranger, and how they’re playing true to his grief instead of having him get all stoic about it. Even suddenly dark and violent Liam is never going to be that gritty cowboy type.

King Amethar- wait, I guess we just say Amethar now?- had a flashback of his sisters which was another heartbreaker. They’re arguing over how to handle his elopement with commoner Catherine Ghee, and one of them jokes about how much would have to go wrong for this to be a problem. Ouch.

The other flashbacks were a little lighter- the (former) princesses being their sassy careless selves, plus Sir Theobald as a dorky young knight. They came as nice little breaks in the otherwise constant movement of ‘Escape From The Bulb Creeps’. 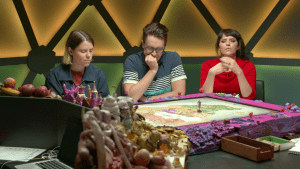 Liam, Sir Theobald, and Jet (played by Ally Beardsley, Brian Murphy, and Emily Axford) made the absolute most of their very limited options without breaking character. Amazing.

The big surprise here is a callback to Jet’s earlier prank on Lord Thad, the avocado Lothario whom she left waiting for her in an alleyway. That started as a way for her to ditch him at a party, and Brennan made a few jokes about how he was still there. Seeing that become how the titular escape from the bulb creeps actually happens was awesome.

It was also good to see Jet actually have a wild idea that worked out. It was actually the best possible route, because the Imperial Army couldn’t predict her chaos and went the wrong way looking for the party. Jet growing as a character and I’m here for it.

Plus, the whole scene where Ruby disguises herself as Lord Thad and commandeers his carriage with Jet’s family in tow- priceless. Absolute Benny Hill level shenanigans that somehow works out.

Thad really was a giant jerk if that over the top scene worked for his servants. I’m not sorry Liam knocked his pit out (though I am glad he didn’t die, for Jet’s sake).

The last half of the episode was very political. That’s a blast, because the characters left standing are some of the LEAST political. Only Sir Theobald has any kind of head for politics. The twins are chaos incarnate. Liam can’t talk to people without tripping over his own feet. Even King Amethar is uncomfortable at court.

I’m gonna take a moment here to give SO MUCH CREDIT to Lou Wilson, Amethar’s player. Lou is a very sharp guy himself, but Amethar is a simple barbarian who only became king because his entire family died. He’s not bright. In ‘Escape From The Bulb Creeps’ I saw several points where Lou had an idea but knew Amethar wouldn’t. I have a boatload of respect for his dedication to staying in character.

(Side note in case you haven’t heard- Lou has a part in Pete Davidson’s upcoming movie The King of Staten Island. Check it out June 12th to support the D20 cast!)

Back to the political maneuvering- this was such a good stretch of roleplaying. The web of loyalties and obligations in Calorum is complicated. There was a shifting balance of power between the timid young Duchess Primsy Coldbottle and her loyal but much more savvy friend Captain Annabelle Cheddar that kept our players on their toes. 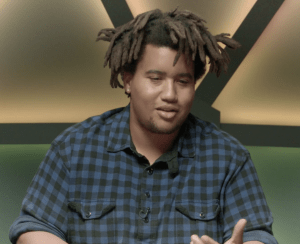 Mad respect for Lou’s dedication to character- he’s so good at following Amethar’s instincts, even when they’re not great, without turning it into something that disrupts the game.

Also, can we talk about Liam’s continuing inability to talk to Annabelle? I rewatched the scene where he attempts to bribe her four or five times just this morning. He just got so awkwardly descriptive but also somehow not creepy. I don’t blame her for taking a swing at him, but I laughed so, so hard.

What stands out for me this episode is how almost every turn of luck they have depends on a past kindness. Jet helped Annabelle win the favor which allowed Primsy to marry, which wasn’t ultimately lucky for Primsy but did mean there was a ship ready to go when the Candians needed to escape.

The twins had made an effort to be nice to the obviously overwhelmed Primsy at court. What gave them an in with the Duchess when they had to reveal themselves on the ship.

Finally, Ruby risked her whole family’s safety to tell the Dairy Islanders about Manta Ray Jack being locked in the Tower. He was able to be rescued before an execution could happen. That act of loyalty in a moment of personal danger is what made Annabelle decide to bring the Candians to the Islands to plead their case instead of turning them over to the Empire.

It’s the kind of storytelling Brennan is known for: little side jokes and small decisions coming back into play in a big way. I’m so relieved not to have a repeat of the single railroading incidence that made me so mad a few episodes ago.

(Actually, I’m a little embarrassed to have reacted so strongly to a single mistake by an otherwise incredible dungeon master. No one’s perfect… we shouldn’t expect them to be. If you were also mad, do what I’m doing and keep this episode in your pocket as a reminder to have patience.)

As ‘Escape From The Bulb Creeps’ nears its end, the characters run into another situation we all saw coming. Primsy’s new husband Lord Stilton Cordeau is apparently, inevitably, trying to kill her since she’s the heir apparent to the Empire.

Sir Theobald did try to warn her about that- but she’s young and sheltered and in love. Of course she doesn’t listen, and of course it comes back to bite all of them.

I can’t wait to see how the group gets off their sinking ship and away from the traitorous guard ships. Like a lot of the cliffhangers this season, it’s hard to imagine a situation where they will get out, and maybe not all of them will. What we do know is that it’s going to be a good story.

Did you catch ‘Escape From The Bulb Creeps’? Tell us what you think in the comments!

TOPICS A Crown of Candydimension 20dropout

Previous:Michael Bay Is Making a COVID-19 Film and We Need To Talk
Next: Queer Fantasy Series “Wynd” Issue 1 by James Tynion IV Releasing This June!