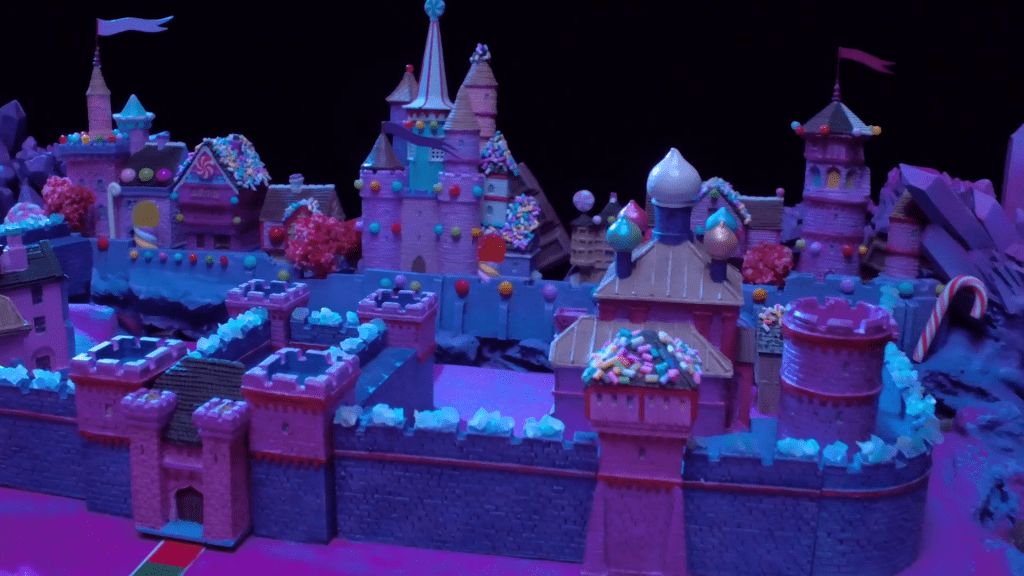 ‘Blood and Bread’ is the second time we’ve seen the A Crown of Candy characters on the run from overwhelming odds, down one character and badly injured. It’s a desperate flight to freedom punctuated with brief flashes of combat and some really heart-wrenching emotional beats.

This episode is a lot different than- well, in truth it’s different than any other episode of Dimension 20 we’ve seen so far. It isn’t really a combat episode, though most of it takes place in combat rounds. ‘Blood and Bread’ is an extended chase scene. The characters had two main goals: retrieve Jet’s body and get away from Castle Candy before the Calroy the Lying Cake Traitor and his villainous baked good army could kill them.

What I really appreciate about the beginning of ‘Blood and Bread’ is the care taken with the subject of Jet’s death last episode. I’m not saying people were flippant about Lapin or Preston dying, because we’ve seen the effect of those losses in past episodes.

Jet’s death was a bit different, though. She didn’t die after a long battle with plenty of bad rolls. She literally died because she had a low initiative roll, then had to make her death saves with disadvantage due to being poisoned. It felt unfair because it was unfair, in keeping with the overall theme of this season.

Obviously the other characters were going to have trouble accepting this. Some of the reactions were heartbreaking, like Ruby begging the Sugar Plum Fairy to bring her sister back. Siobhan Thompson did an outstanding job showing the mix of grief and angry determination a young woman in a magical society might feel in that situation. A+ character moment right there.

(Quick aside, we’re all tracking that the SPF clearly wants the Candian royal family to get murdered in the North for some reason, right? This is the second time she’s urged a character to convince the group to go north. This time she even said “to go where Jet is”- ie, the afterlife. You heard it here, people.)

Other reactions are shot through with silliness. The painfully awkward ranger Liam Wilhemina wrapped his cousin Jet’s body in tearaway lingerie and tucked her into a cupboard while he ran to get the others.

That was heartbreaking since he had tried so hard to save her and spends this whole episode covered in her candy blood. It was also absolutely hysterical. Finding moments of sheer absurdity is one of player Ally Beardsley’s strengths- they always have a joke up their sleeve even in the darkest moments.

There was another touching reaction scene with Amethar and Ruby where she broke down telling him about Jet’s death. Both characters were almost dead. Ruby had (I think) 3 hit points left and Amethar had just been stabbed with a water dagger and thrown off a castle. Despite the danger and pain he was in, Amethar wraps his daughter in “the biggest, warmest hug” and just holds her for a moment.

Who else now wants a hug from Lou Wilson?

We get a funny little beat to break up the heartbreak when Liam (AKA Peppermint Batman) reveals he’s there, followed almost immediately by Zac Oyama’s Cumulus appearing out of the darkness. This group can’t even take death seriously for long and I love it.

I want to take a moment to talk about Queen Caramelinda here, because she had a rough day in ‘Blood and Bread’ despite not being injured. First, Sir Theobald barely reached her in time to get her away from the Ceresians. While she was still trying to cope with the fact that the castle was under attack and Calroy was the traitor, she hears that her husband (well, more or less) had been killed. Then she runs into Amethar for a beat of relief. Before she can even process that Ruby tells her Jet is dead and it’s both Ruby and Caramelinda’s fault.

How bad do you think it will hurt her when she realizes that Amethar knew the moment Jet died and she could barely believe there was danger when Sir Theobald came to rescue her?

Caramelinda can’t even process anything because the group has to get across a field full of Ceresian and Vegetanian soldiers to reach the harbor, where (hopefully) Manta Ray Jack’s ship can get them up the river. I really feel for her.

As I mentioned earlier basically the entirety of ‘Blood and Bread’ is a chase scene across a massive scale terrain set. It’s so big that for the first time Brennan uses tiny little minis for the players, because if he used the regular minis the table couldn’t hold the whole area they had to traverse.

Let’s take a moment to enjoy this incredible creation by Rick Perry and his team:

Look at that beast of a terrain set. It more than takes up the table, even needing little overhangs just to fit. It’s stunning down to the last candy detail: sprinkle roofs, Candyland road, fluffy spun sugar trees, candy rock accents.

This must have taken so long to make and it was made for one episode. They do this every week- or at least, every combat episode. Detailed work like this is the trademark of Dimension 20 as a show, and I love it.

Fangirling over the sets and minis aside, the whole escape scene was nerve-wracking. There were several points in ‘Blood and Bread’ where I yelled at the group for splitting up because I knew how close Amethar and Ruby were to death, and I’m invested in at least one Royal Rocks family member making it to the end of the show.

Jet’s death has had a serious affect on the players as well as us. She died almost before we realized she was in danger, and the players are showing some signs of nervousness and hesitation when trying to choose a path. A few times Brennan had to stop them and ask for a decision because they wouldn’t have time to endlessly debate.

Their nerves really drive home that they shoot all these episodes back to back. It must be really intense to eat, sleep, and breathe your character for a week (or however long).

Luckily for everyone the group was able to make it to Manta Ray Jack’s ship. The Vegetanian and Ceresian knights were so close behind, but Amethar (again, ALMOST DEAD) went into beast mode and pushed the ship free of its moorings so it could take off right away.

Honestly, Calroy thinks he’s so clever but he didn’t even behead Amethar to be sure he finished the job. I cannot wait to see the showdown between those two. It’s almost going to be as good as when Ruby kills Ciabatta, because that has to happen.

I have a few scattered thoughts while watching ‘Blood and Bread’:

We’ll have to see how this week’s intrigues will affect the overall power structure of Calorum. The Dairy Islands leader, Duchess Primsy Coldbottle, has recognized Amethar as the rightful Emperor but it remains to be seen if her word will carry weight with other nations.

It’s also questionable how the Candians will be received in the North, where Liam’s massive polyamorous clan lives. Technically Liam was a hostage to hold the rebels in check, but we know that was a political thing and Liam was never really in danger. Hopefully it’s clear that the Rocks family isn’t holding a grudge.

I want to do two quick (unsponsored!) plugs here. First is for the Dimension 20 subreddit, where there is a wealth of fan art and a really good spoiler policy to keep your from having the show ruined if you’re an episode behind. Also, head over to the DROPOUT store for some very cool D20 merchandise. They’re donating all profits from their store in June to a slate of great charities listed over on their Twitter. I bought the Bud Cubby mug with his famous Fantasy High anarcho-socialist monologue and it is my favorite think to eat ice cream from.

That’s about it for this week. See you next time, when we will probably all wind up crying but at least having fun.

Tags: A Crown of Candy, dimension 20, dropout, dungeons and dragons

2 thoughts on “Dimension 20 ‘A Crown Of Candy’ Episode 10 Review: Blood and Bread”