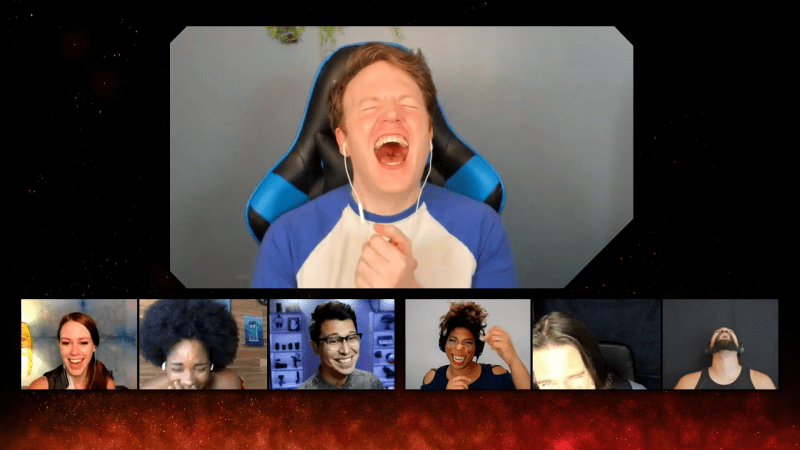 Is it weird to think of a bunch of pirates getting happy-ever-after story wraps? As Dungeon Master Brennan Lee Mulligan says towards the end of ‘The Horizon Beyond The Squall’, pirates don’t usually live long enough to get a happy ending. Those who do are highly crotchety and usually missing a few limbs.

Still, one thing we watch Dimension 20 for is satisfying endings. Pirates of Leviathan doesn’t disappoint in that regard.

“Uh, hey,” you might be thinking, “It sounds like something about ‘The Horizon Beyond The Squall’ did disappoint you, if you feel the need to say what didn’t.”

Well, you’re not wrong, Hypothetical Reader Friend. The final third of the episode was pretty disorganized and hard to follow. I felt a little frustrated trying to track what was happening and when and who was where. More importantly, I got the impression the players were also a little frustrated by the same thing.

My theory: there was supposed to be something else happening in the story that got cut, resulting in a story that didn’t have a great place to stop last time other than “in the middle of the battle”. I first guessed it was how long the gang spent in the Gold Gardens that threw off the pacing.

That felt like an organic “calm before the storm” situation, though, so I don’t think that was it. I think what actually happened was that Marcid the Typhoon sent out letters warning people about the Crescent Moon Trading Company’s plot.

From a pacing perspective, it would have made more sense for Episode 5 to be a big scavenger hunt trying to track down all the lanterns and break them before approaching the final lantern at the top of Leviathan in the ‘The Horizon Beyond The Squall’.

Brennan would have had to ignore B. Dave Walters’ actions or declare that the letter didn’t arrive in time to keep with (what I think was) the original plan.

That wasn’t going to happen. Brennan always gives his players agency. He would only dismiss a character’s actions if they were truly catastrophic to the story, and this wasn’t. The series is overall a lot of fun. I enjoyed the extra time given to the battle at the Ramble. I was just a bit frustrated by the mildly chaotic ending.

Pacing may have been an issue, but in all honesty, I’m probably holding the episode to an unreasonable standard given my general love of Dimension 20. ‘The Horizon Beyond The Squall’ had plenty of amazing story beats.

Let’s talk about Cheese. Anyone else a sucker for the “small neurotic character is actually a badass” trope? Because he has grown into himself with a FIERCENESS. After accepting that he IS a wizard and he CAN do great magics, he incinerated a bunch of harpies (as well as toasting Alamaria to a nice medium-rare).

I love so, so much that Cheese was one who broke Alamaria’s concentration on the ritual. He deserved that victory. Props to Carlos Luna as well for that speech about how Myrtle making the effort to save him (twice!) made him realize his own worth. I thought Aabria Iyengar was going to cry- until he dropped that “I’m Prince B*tch!” line that made everyone break.

Not a lot of lines could make three people fall out of frame laughing. It’s to be mentioned next time DROPOUT does one of their “share your favorite quote and win this cool thing” promos.

Speaking of things we’re going to see again, Bob. Barbarella Sasparilla Gainglynn has become one of my favorite bards- no, one of my favorite characters- in an actual play show. How cool is it that Krystina Arielle writes songs to cast her spells? It’s immersive in a really special way. (Side note, has anyone seen YouTube compilations of her songs yet? Link me in the comments.)

Bob also gave me my favorite death this season. I thought she was going to try to convince the druid to back down. No, no, no. Without losing one measure of her megawatt smile Bob held Alamaria’s hand and slowly, inexorably drained the life out of her with a heroic Inflict Wounds roll.

I said before that Bob was going to be scary, and I was right. You don’t piss off the sweetheart characters, people.

Did we know that Jack’s parents were story-relevant? I’m guessing yes, since his crew made a point of, uh, “escorting them” out for an emotional good-bye on their way to the afterlife. Matt handled the scene like the pro he is, so I was still engaged by the interaction, though their approval wasn’t something I remembered he’d been seeking.

Langley Sheffield-Harrington had a decently amusing death. It came with the advantage of the pirate elders standing around discussing how they were going to repair the damage when the dust settled. I like getting a peek into the practicalities of running a pirate city.

The characters’ individual story wraps hit me in different ways, so I’m going to touch on each.

I said I was done picking at an episode I enjoyed. I was wrong: there’s one more critique for ‘The Horizon Beyond The Squall’. Cheese’s ship’s name is just bland as unflavored box mashed potatoes. The Harvest Moon? Is that supposed to be a comment on “harvesting” things from the Crescent Moon Trading Company?

The blame for this doesn’t rest on Marcid for suggesting it, even though I wondered why his character would do so. Brennan dropped increasingly pointed hints that the ship needed a name, and no one else had jumped in with one. What was that all about? It was getting awkward. Better they leave on The Harvest Moon than take the bad luck of sailing an unnamed ship.

My final few notes for ‘The Horizon Beyond The Squall’:

If you were waiting for Pirates of Leviathan to end to binge the whole season over at DROPOUT, it’s all up there now. Otherwise, you have a long wait ahead of you- they’re only just putting The Unsleeping City on YouTube. My rec is (as it always is) to drop the five bucks for DROPOUT and just roll around in all the quality actual play content there. (No, we’re not sponsored by College Humor. We just love them over here.)

What did you think about ‘The Horizon Beyond The Squall’? Have you found the All-Bob-All-The-Time playlist?