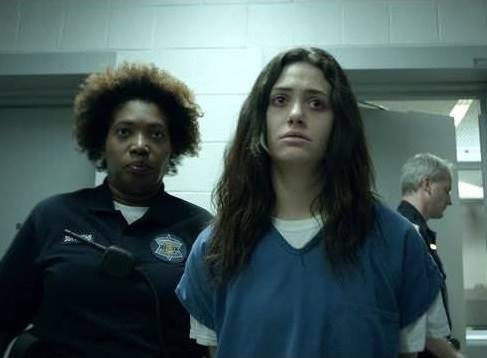 This week’s episode was a lot less traumatic, but it still really put me through the ringer.  Kev surprisingly got on my nerves in this episode, but we’ll get into that later.  But my “Give Emmy an Emmy” campaign starts right now because she did an amazing job in this episode.  Jeremy Allen White deserves a nod as well because he made me cry, damn it!  So let’s jump into my thoughts on “Iron City”.

The episode starts right where the last one ended.  We watch Fiona get booked and wait for processing as Lip and the others are at the hospital, waiting for an update on Liam.  Kev tries to talk to Lip about Fiona, who isn’t having any of it, and honestly I don’t blame Lip at all.  At that moment, he didn’t know if Liam was going live or die, and regardless of the fact that no one wanted to own up to it, it was Fiona’s fault.  If she would have just done the responsible thing and gotten rid of that garbage the second Robbie left, Liam would be okay.  Lip’s scenes with Liam were heartbreaking, and the second one had me tearing up like a big ole baby.  Seriously Jeremy Allen White is a fantastic job in this episode.  I couldn’t help but feel sorry for him when everyone was bombarding him about Fiona.  That’s why I said I was annoyed with Kev.  He kept constantly bringing up Fiona and trying to defend her actions when it was clear Lip did not want to hear any of it.  Yes, I realize her situation is dire and needs to be dealt with, but all of Lip’s focus was on finding Frank so that they wouldn’t lose Liam.  There’s no defending what happened, and saying that it was no one’s fault is complete and total crap.  The coke shouldn’t have been there and definitely not out where the kids could see it, especially after everything Frank’s drug use has put them through.  In the final scene, the social worker commented on needing to schedule a home visit pronto, so they still might be in danger of losing the kids.  Especially when DFS comes in and realizes Ian is missing.  Lip was shown still trying to keep up with his studies, which was heartening, but I don’t believe for one second he’s going back to MIT anytime soon.  He doesn’t trust Fiona as far as he can throw her right now, and again, I don’t blame him.  This was a hell of a big way to screw up, and Fiona has put the entire family in jeopardy with her actions.

Seriously though…give Emmy an Emmy!  She was amazing in this episode and looked like she was absolutely terrified for the majority.  The phone call to Lip tore my heart to shreds.  Lip looked like a little kid, as if he still couldn’t believe his big sister was in this situation, and Fiona looked as desperate and scared as we’ve ever seen her on the show.  She flabbergasted me completely when she refused to tell her lawyer where she got the coke.  Maybe that’s just her hood mentality of not wanting to be a snitch, but she needs to drop that right now.  If I were her, I would have been like, “Here’s his name, address, and phone” in a heartbeat.  Color me shocked when Mike actually bailed her out of jail, despite his harsh words of never wanting to see her again.  Makes me wonder why he did it to begin with?  Perhaps he saw his brother’s hand in it and wanted to help her out?  Whatever his reason, the man’s a saint for doing it.  I can’t help but wonder where this leaves her in terms of her job.  I can’t imagine the cup company would want to keep someone staffed who has been charged with drug possession and child endangerment.  Things are going to get tight for the Gallaghers yet again, another casualty on Fiona’s path of self-destruction. 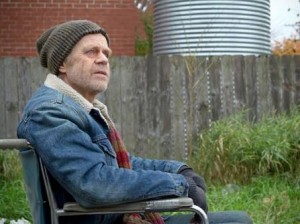 Again I ask the question again I posed last week: are they actually going to kill Frank?  His health has been declining rapidly since this season started, and the doctor’s prognosis was not positive at all.  At the reunion with Liam, he was so doped up on pain pills; he could barely function or respond.  My mom theorized that perhaps Sammi is playing up the good daughter act so that when Frank croaks, she’ll get the insurance payout for his leg.  And I can’t say that I begrudge her wanting to do that.  But if that is the case, I don’t want her to succeed either because if anyone deserves that money, it’s the kids that have had to put up with Frank’s crap since the day they were born.  We saw a bit of genuine fear and emotions come out of Frank outside the hospice home.  I think the gravity of the situation is finally hitting him, and that scares the hell out of him.

We actually got a decent amount of Sheila face time in this episode!  Hurray!  I think the reason for her being at the Gallagher’s house constantly is pretty obvious: she is desperately lonely and misses caring for people.  We saw how pleased she looked when she walked around the house and saw the kids spread out everywhere.  Roger Running Tree shouting at the kids the way he did didn’t sit well with me at all.  Chalk it up to a 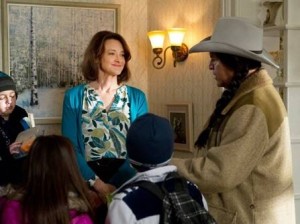 man being stressed out about having to suddenly take care of five kids if you want, but he did not need to raise his voice like that.  Going back to Sheila, the next day when she woke up to an empty house, you could see the look of pure loneliness on her face.  Going to see Roger is quite the bold move and wildly outside her usual comfort zone.  But I think she just wants to have a family to take care of again, and she got that with Roger and his nieces and nephews.  I’m interested to see what she will discover once she arrives at her destination.

Next week’s episode has Ian reappearing with Mickey confronting him at his job.  God, I want Mickey to knock some sense in Ian’s head and get him to stop screwing up his life!  Get him out of that façade of simply not giving a crap.  I miss the old Ian and can’t help but wonder if something happened during basic training as well to make him backslide so far.  Fiona and Lip appear to be crossing swords over Liam, Fiona just chalking what happened up to a mistake, while Lip can’t let go of the fact that Liam almost died.  Fiona needs to accept some responsibility for her actions, and I think that refusal to do so is what is driving that wedge further between her and Lip.  I watched a clip on the Shameless website where the Gallaghers butt heads with Sammi over Frank and his care, stating that the only reason she and her son haven’t been kicked out yet was because she was taking care of Frank.  But with a social worker coming to pay a visit at any time, Frank was not allowed to have any illegal drugs that could put the kids in further jeopardy.  But will Sammi comply with these terms?  We shall see…

What were your thoughts on this episode?  I thought it was very well done, with Emmy and Jeremy being the stand out performances.  The actress that played Debbie crushed me with her scene with Matt, and I wonder if he and Debbie will restart their relationship next week.  If they do, I think they can expect some strong opposition from Lip, if his reaction in this episode is anything to go by.  Comment below with your thoughts and thank you for reading!