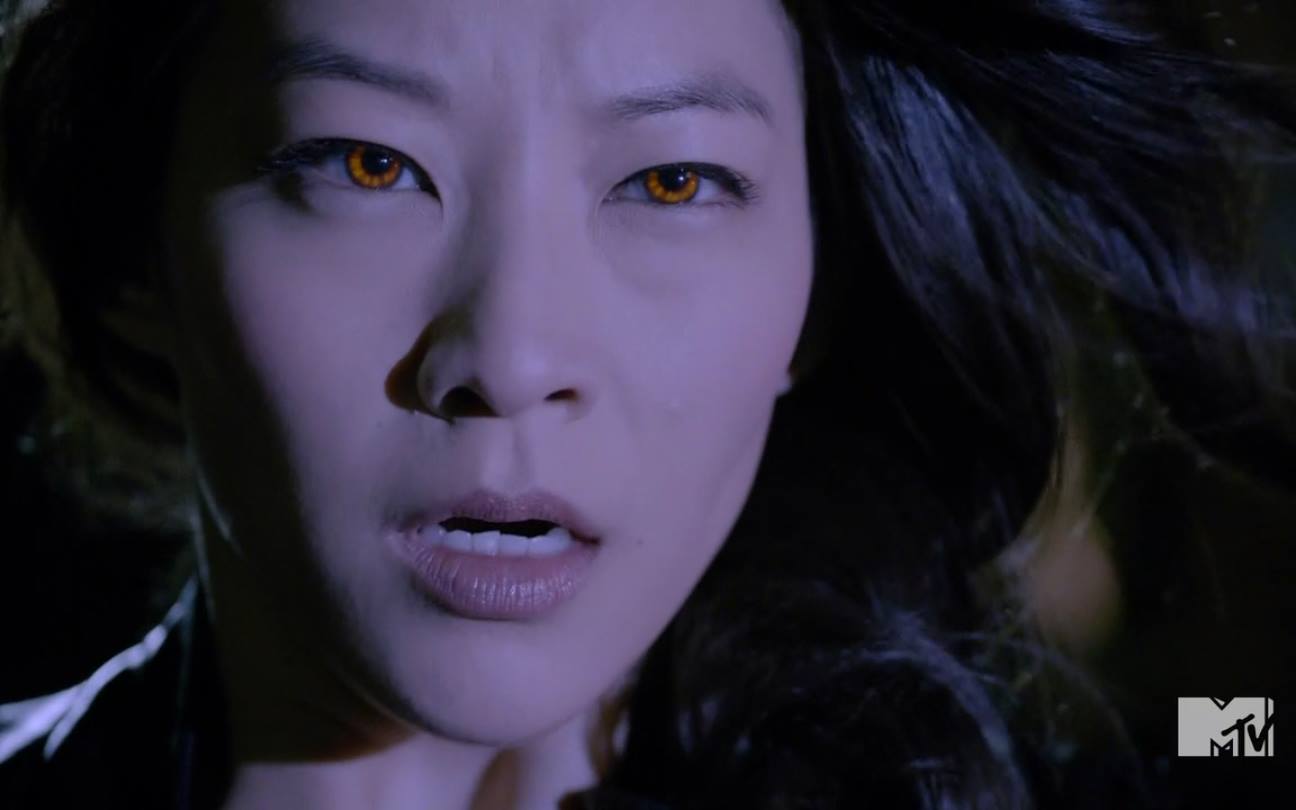 It’s now clear, I am going to need a really long relaxing vacation after this season ends and I am sending the bill to MTV. Remember when this show was about werewolf problems getting in the way of Scott’s lacrosse schedule? But you know what they say; no pain, no gain. And let’s face it, if this Season wasn’t as good as it is it wouldn’t be nearly as traumatic. The masochist in me can’t help but enjoy the pain when it’s administered so masterfully.

There was so much going on this week that I don’t know where to start, especially when I genuinely enjoyed most of it. I mean can we just have a moment of silence for how good 3B is? Because I’ve got to admit I almost gave up after 3A. I’m not going to lie, if I went through this with a fine toothed comb I could still find quite a few plot holes/continuity issues and honestly sometimes I don’t know what they are thinking – Peter Hale has a long lost daughter… what? But through the good times and the bad I love this show and nothing makes me happier than watching it reach its potential. 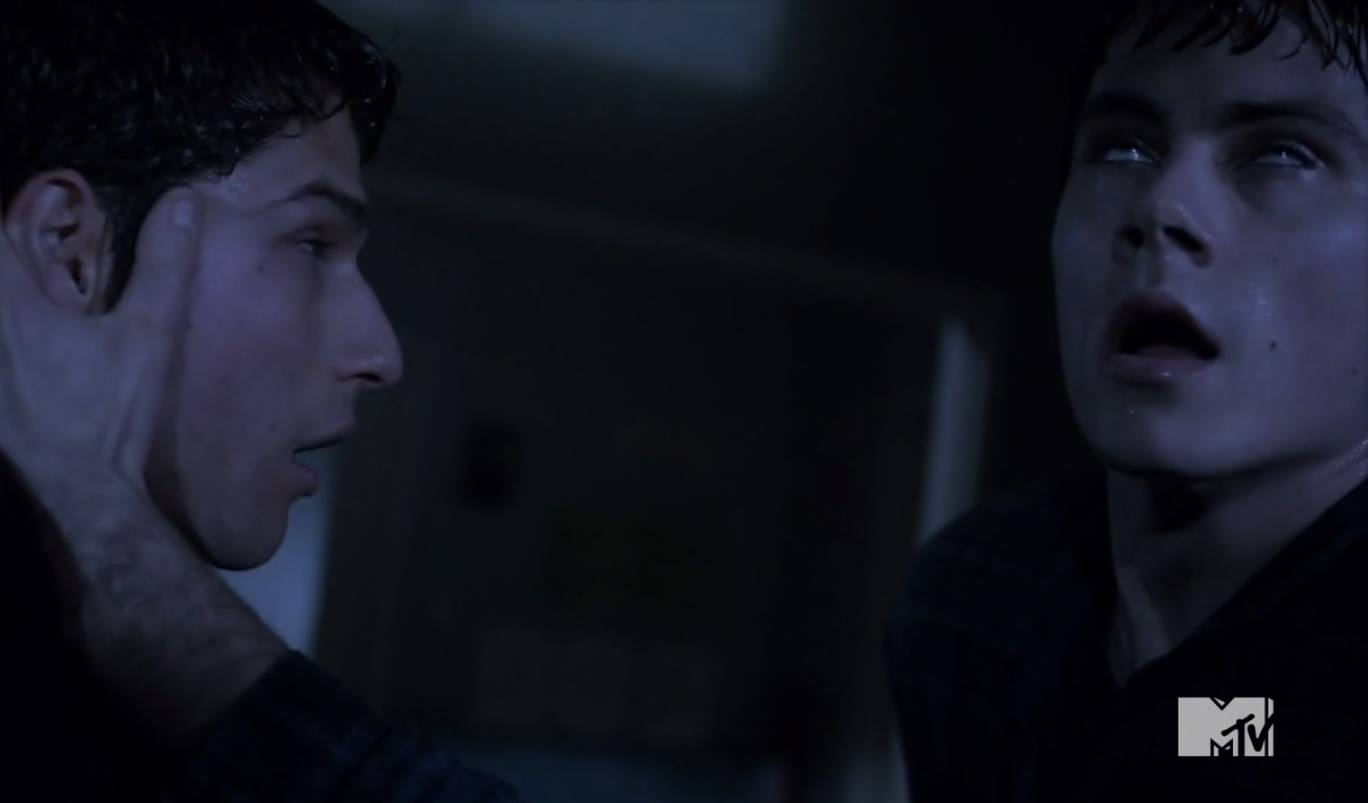 This episode didn’t pack as much emotional punch as last week but it sure was exciting. It was so exciting that Coach getting shot with an arrow and Dethan making out aren’t even significant discussion points! The race to figure out what the Nogitsune had planned was gripping and I was totally hooked as the extent of the damage was slowly revealed. The pacing was off, which stunted some of the suspense and it wasn’t all that difficult to guess what came next. But honestly what kept me on the edge of my seat was wondering when the Nogitsune would reveal himself. And you can probably still hear the echo of the profanities I screamed when he finally revealed himself to Scott.

I’m pretty sure every possible positive adjective was used last week to describe Dylan O’Brien’s performance. But in case there is still someone out there that doesn’t know that Dylan O’Brien is seriously talented his performance this week was: dazzling, radiant, intense, incandescent, exceptional, extraordinary, and just generally brilliant. The bonus this week is we now know what his orgasm face looks like… sorry, the Nogitsune just really enjoyed sucking on Scott’s pain. I know a lot of people have been waiting for Stiles to penetrate Scott. 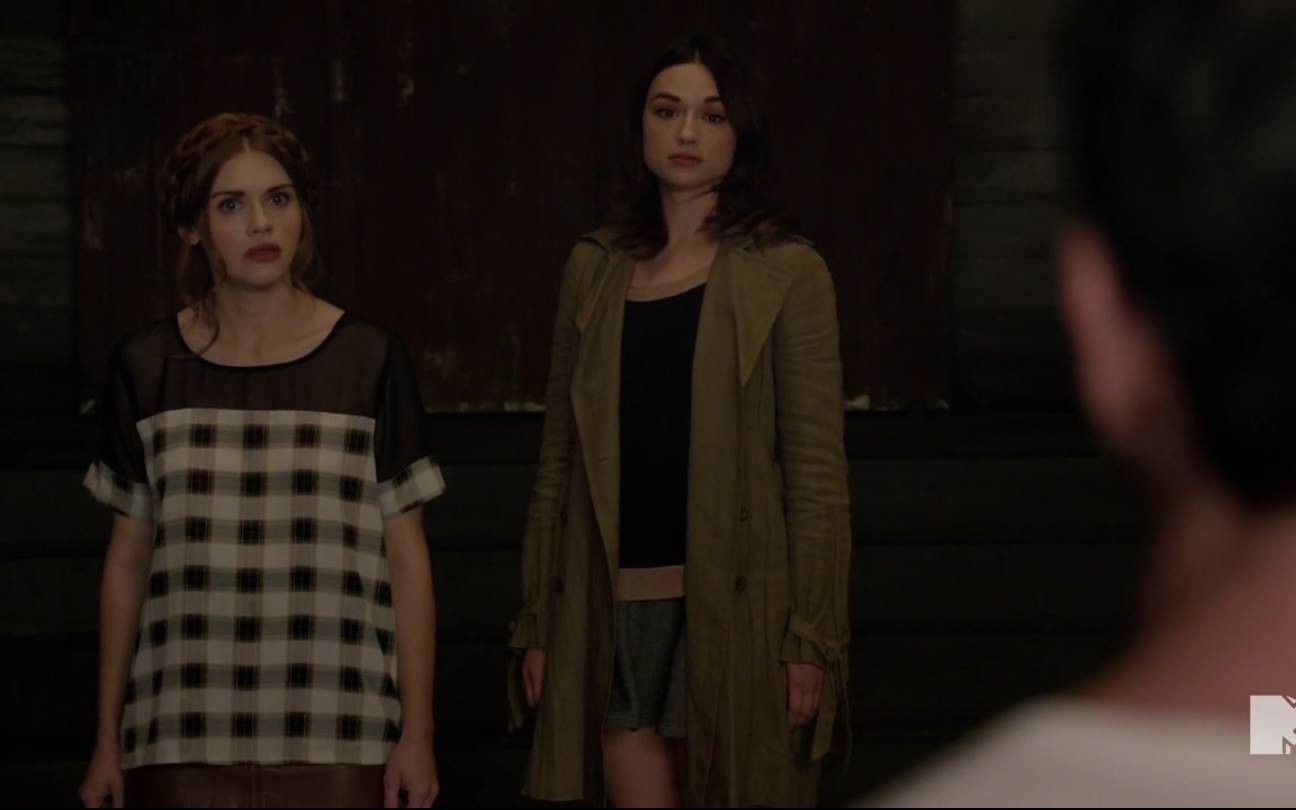 A special mention goes to Tyler Posey because the look on his face as the Deputy died in his arms was utterly heartbreaking. Actually, all Posey’s performances have been rock solid this season. And watching Scott desperately try to deny the possibility that he might lose his best friend is one of my favorite aspects of this season. This is the season of Scott and Stiles friendship and both Posey and Dylan are knocking it out of the park.

It was fantastic to see Lydia and Allison together again, any extended period without them interacting is always a disappointing time. Holland Roden and Crystal Reed have such fantastic chemistry, I would really love to see them get the kind of deep emotional moments that we constantly see between Scott and Stiles. Don’t get me wrong, what we got this week was still totally awesome. Not only did Lydia call in Allison as her bodyguard (instead of that other guy she keeps hanging out with) but we got to see Allison electrocute Peter, which was fun for the whole family. 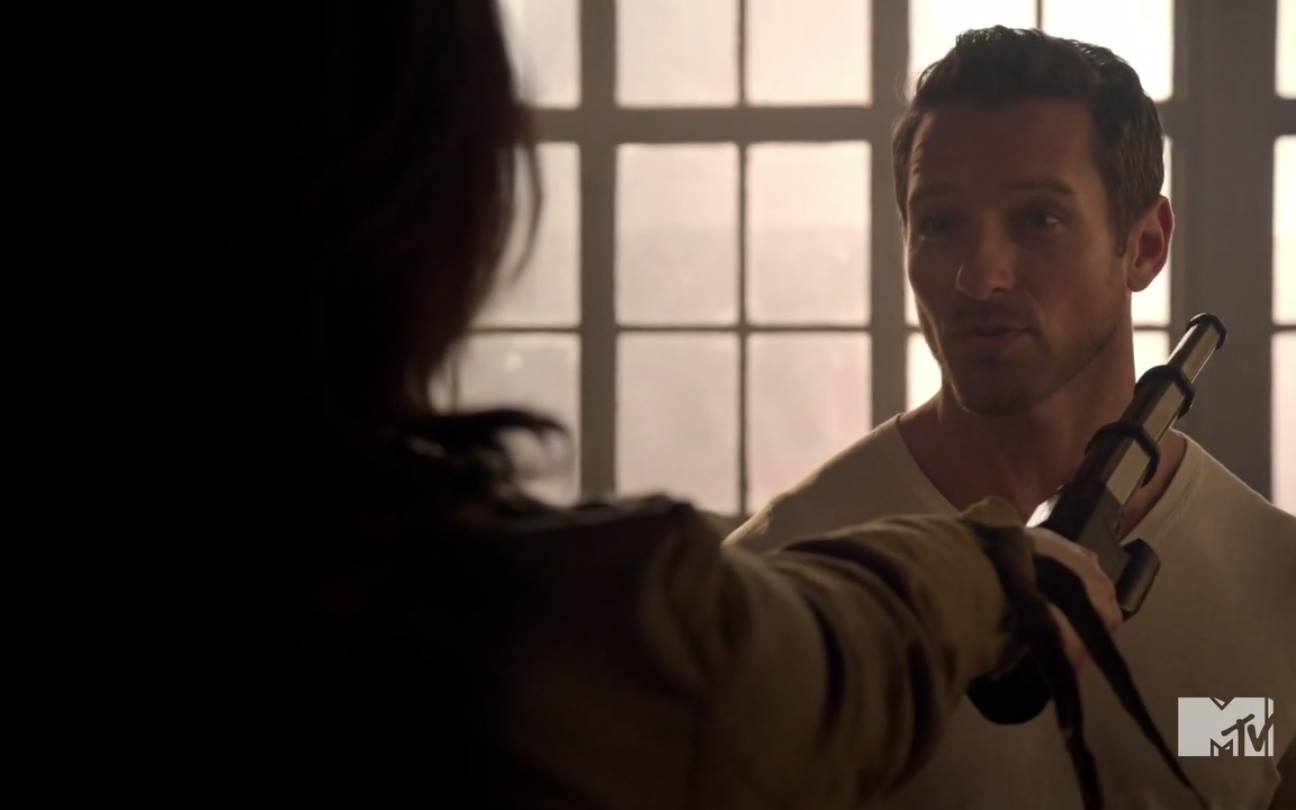 Speaking of Peter Hale, the reveal that Malia Tate is in fact his illegitimate child (I’m assuming it was illegitimate) was a little too soap opera for my tastes but I guess it’s fitting for one of the most over dramatic characters on television. And he was a total drama queen this week wasn’t he? Of course over the top creepy Peter with nefarious intentions is my favorite kind of Peter (I do so hate it when they try to make him sympathetic), so I loved it. It was also nice to see some acknowledgment of the trauma Peter has caused Lydia over the past few seasons. I can only hope that this is leading towards a violent end for creepy Uncle Peter (in the distant future). If the one wielding the weapon is Lydia, all the better.

Kira is turning into a total badass and it was so great to see her fighting along side Scott. Hopefully we start to delve into her backstory soon because while I am already completely in love with her. (I am Scott McCall in this situation.) I would like to see something more than her relationship with Scott and Kitsune powers. I REALLY want to see Kira confront her mother, because when your mom’s trying to kill your potential boyfriends best friend it can put a strain on the parent/child relationship.

I’m still super disappointed that they killed off a lady of color and replaced her with generic white guy number 37 but I might have fallen under the spell of deputy green eyes a little bit. Last week he was an ass to Agent McCall and this week he flirted with Jared (that one guy that was sick on the bus after Stiles smiled at him – it was a seriously creepy smile) while attempting to defuse a bomb. Deputy Parrish would have been 100% cooler as a woman, but he’s not. 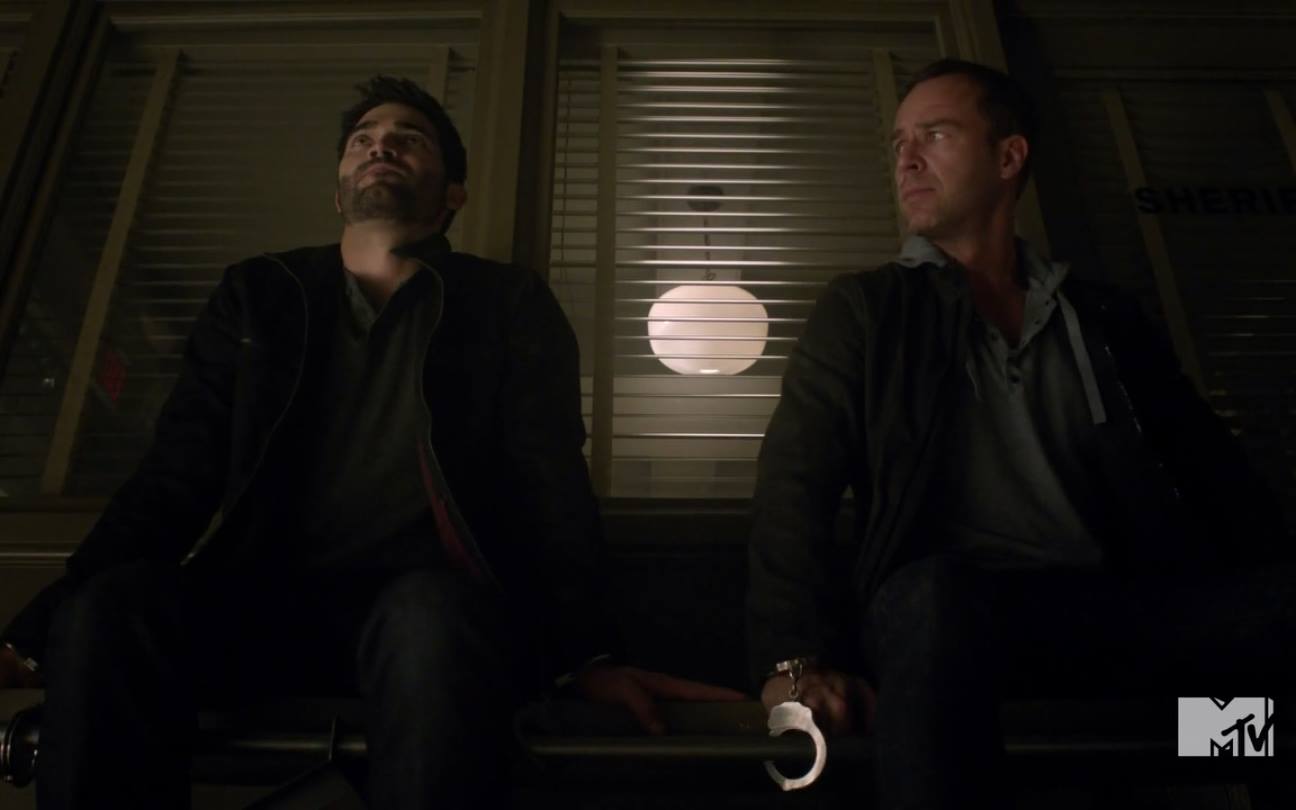 One of my favorite parts of the episode was the unlikely team of Chris Argent and Derek Hale and it’s not just because it was incredibly sexy. It was really very sexy though. These two characters that are driven to hate each other because of the family they were born into are forced to work together again and again to protect the people they love. Give me more. It was also great to see Derek step up as a hero, even though he still pretends he’s not. Not going to lie, I’m pretty sure Chris fell a little bit in love with Derek after he saved his life (I did too, don’t worry Chris). 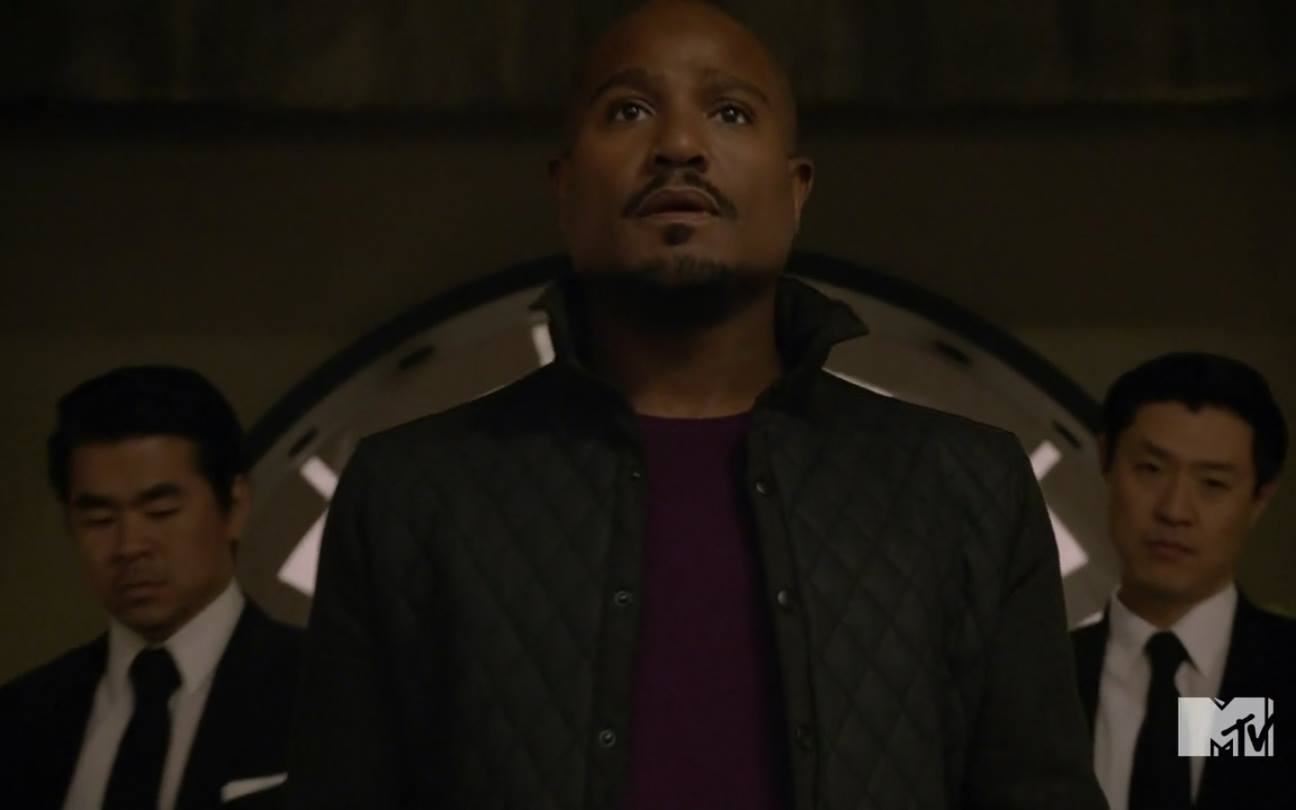 We finally found out what Deaton has been up to since Episode 13. Just in time, too, because I was starting to get a little suspicious. I’m never quite sure what to make of Deaton’s character. He seems to really care about Scott but I don’t know if that affection extends to Stiles. That’s the thing, the Nogitsune is dangerous and I can’t help but wonder which of the people they thought were allies. Scott will have to fight to protect his best friend. Maybe they will find a cure right away, but as we still have five episodes left that doesn’t seem likely. Besides, I’m not entirely sure Stiles is the only one we should be worried about.

Full disclosure, I almost forgot to mention Isaac but there was so much going on it was hard to keep track. I’m worried about so many characters right now that I have to prioritize. I did really love that Melissa suggested that they were his family now because Isaac really does need a family. But let’s face it, the “Stiles is being controlled by an evil fox” storyline is kind of holding the bulk of my focus at the moment and everything that is left is worried about Lydia taking advice from Peter.

Ultimately I know it was a good episode because next week cannot come soon enough. But enough about what I thought, what did you think?