Remember that time when Black Sails dedicated the vast majority of its mere fourth episode to a plot that mostly consisted of cleaning a freaking boat?

If your answer is yes, and you’re as frustrated with IV. as I am, then truly, my heart goes out to you.

Okay, okay, I’ll give you this – this episode also featured Eleanor’s push to get the guns that Captain Flint needs to finally go after the Urca. The problem is, while both the guns and a clean ship’s hull may be necessary, the fact that the writers thought that they needed an entire hour to lay out these stories is something I just can’t understand.

Also, though there was some interesting debating and deal-making going on between the Guthries and Captain Bryson (a.k.a. “the man with the guns”), Black Sails essentially repeated what it did last week – spent a large portion of an episode focusing on building what appeared to be an important alliance, only to tear that alliance apart/render it pointless at the very end. In this case it appears that either Eleanor’s father convinced Mr. Scott to stop the transfer of the guns for Eleanor’s own good – or Mr. Scott was simply sick of no one listening to him and acted of his own accord. Regardless, the guns are gone…though at least Captain Flint made a comment that left me with the hope that they will [finally] take to the sea in next week’s episode, to chase after Captain Bryson and claim the weapons that they need.

One thing that IV. did very well was build up that ominous feeling that something (and in this case, likely something bad) was going to happen. Billy Bones insisting that the ship needed to be tied to a different palm was a bit heavy-handed, but the wind and the sand shifting and the creaking ropes – all of which built up to one hell of an ‘accident’ –  at the very least had me on the edge of my seat any time there was a scene on that beach. 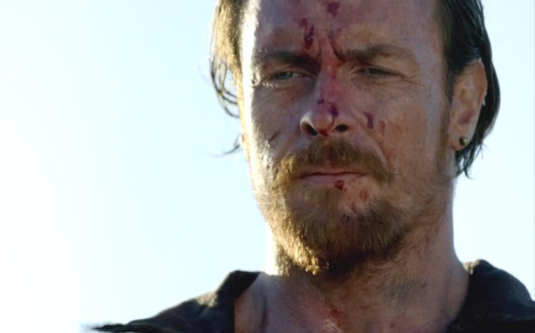 We also got quite a bit more insight into the characters of Miranda Barlow and Captain Flint. The former is likely the disgraced wife of an English nobleman, forced to hide away after her torrid affair with Captain Flint. The question is, will she take Guthrie up on his offer to set her up in Boston and restore some semblance of her former life? And as for Flint, he may be a bit more coy about it than some of the other pirates featured in Black Sails, but he really does seem to be the Biggest Pirate of Them All. Fights and lies to keep his captaincy? Check. Shady past? Check. Possibly worked his way up from some lowly position, like ship’s cook? Check. Maybe even a defector from the British Navy? Check. No qualms about chopping off a limb in hopes of saving one of his men? Check. Not to mention the fact that it seemed pretty darn convenient for Captain Flint that Morley – who’d been doing quite a bit of whispering behind the Captain’s back – was crushed under that ship. (Too convenient, really…)

Of course, we can’t forget Captain Vane, who spent most of the episode in an opium-induced haze and only woke up toward the end to kill the owner of the local whorehouse. If this wasn’t a show about pirates, or if pirates were people who were supposed to live on land and run whorehouses, I’d almost think that Vane’s actions could lead to some interesting developments. Alas, probably not for this show.