Ian Bohen Of “Teen Wolf” Fame Joins Cameo! Do You Have $50 To Spend? 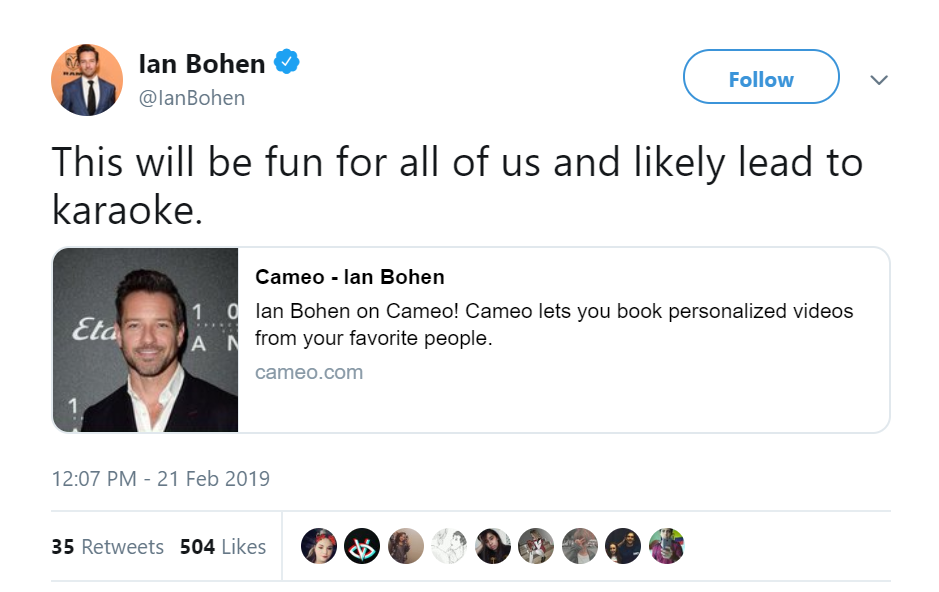 Ian Bohen, who played Peter Hale on Teen Wolf, has joined Cameo. Do you have $50 to spend for a video where he yells “I AM THE ALPHA!” at you?

Cameo is definitely a service I have heard mixed things about. Some people are of the opinion it is a great way for fans to ask their favorites for custom content. Other see it as a desperate means for certain (so-called) celebrities to hopefully make some money off their fans.

As far as my opinion goes, if a celebrity or a personality thinks they have enough of a fanbase that is willing to pay them for custom video content, I say get that extra coin!

Also, you should consider watching YouTuber Lucas Cruikshank using Cameo to showcase the level of commitment certain individuals on the service display to make sure their fans are getting the most out of the money they spent on a video.

I wouldn’t mind getting a Cameo video from Anneliese van der Pol (That’s So Raven). She is known for doing way more than necessary and it is amazing to see how much she cares. Fingers crossed she considers starting a YouTube channel.

Anyway, coming back to the (somewhat?) problematic Daddy who is Ian Bohen, is he the only one from the Teen Wolf cast on Cameo? Do you think he will be able to get others to join the service, too? Will he do a video with JR Bourne?

Ian Bohen joining Cameo could end up opening doors to so many possibilities!

Do you think fans will be willing to pay $50 for a video from Ian Bohen or will he have to lower his price a bit?

Who would you like from the Teen Wolf cast to join Cameo?

Tyler Posey seems to be the most likely candidate, doesn’t he? He did launch an app to be closer to his fans.

Also, just to keep you all updated, Posey is working on a The Lost Boys pilot for The CW.

Feel free to share all your thoughts with us.

Previous:Jussie Smollett Has Been Arrested For Allegedly Lying About Chicago Attack
Next: Why is #FightForWynonna Trending If ‘Wynonna Earp Season 4’ Has Been Announced? (Updated)