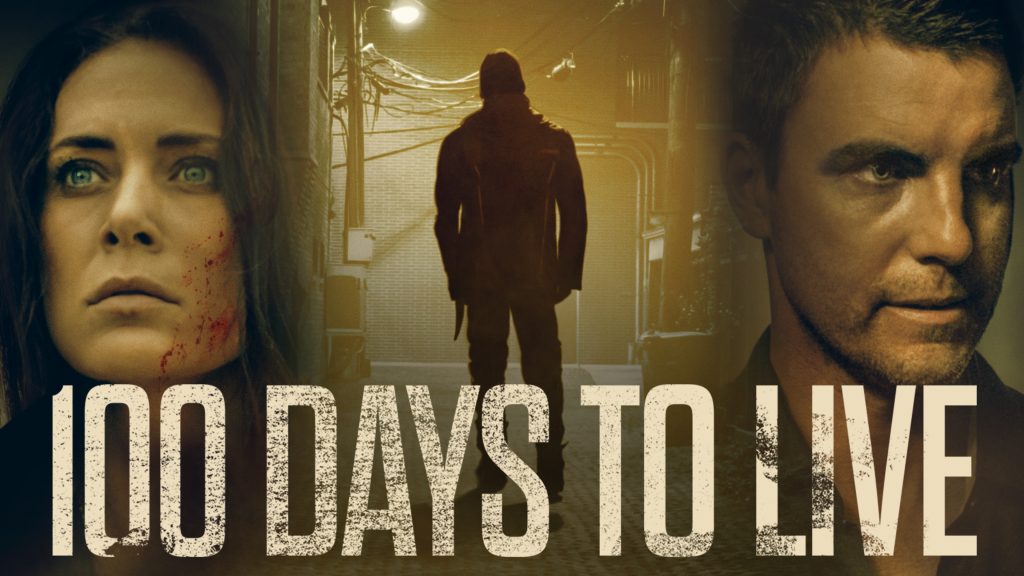 If you asked me in 2019 would I be interested in a psychological thriller about suicide and misguided redemptive angels, you might not get a reply. But in 2020, and now the beginning of 2021, this is important, relevant content! 100 Days to Live feels like a timely tale in the face of insurmountable stress and challenges. I was pleasantly surprised by just how good this movie is.

Written and helmed by first time director Ravin Gandhi, an entrepreneur who runs a successful coatings company, 100 Days to Live is a well-paced psychological thriller that challenges the way you think about life and leaves you with thought-provoking questions by the end. And even a little bit of inspiration.

On paper, it seems like a strange endeavor. Of course, we can all relate to the successful CEO who writes movies in his downtime and had to put in a PTO request for three weeks so he could shoot the movie. Par for the course, right? But while this endeavor should border on obnoxious, Gandhi handled the production with grace, precision, and passion that shows on screen.

100 Days to Live follows Rebecca Church (Heidi Johanningmeier), a trauma survivor who uses her experience to provide a path to peace for others. Her backstory is harrowing, her own mother committed suicide in front of her and she’s suffered from suicidal ideation and numerous attempts. Through happenstance, she meets the love of her life in Gabriel Weeks (Colin Egglesfield) and it seems as though good times are on the horizon when he’s suddenly abducted.

It’s revealed early on that the assailant is Victor Quinn (Gideon Emery), Rebecca’s hotheaded suicide hotline partner. But don’t worry, that’s not a spoiler and it’s hardly (one of) the biggest twists in the film. Each reveal feels earned and I really have to hand it to Gandhi for handling such heavy subject matter with so much care.

I had a chance to sit down with stars Heidi Johanningmeier and Gideon Emery to talk about their experience filming this innovative movie.

The Geekiary: Right! So I wanted to ask what interested you in being a part of the movie?

Heidi Johanningmeier: When I came on it was through Marisa Ross casting in Chicago who is fantastic. She brought me in and I’d seen the sides. When I got the script in my hand to do a chemistry read, I’m reading it and got to one point and slammed the script down and walked off in tears. For an actor that’s a very important moment because it means you want to do it!

Johanningmeier is a bright personality. While waiting for Emery I noted her jacket which was adorned with a “Hope” patch. It’s subtle and lovely and Johanningmeier exudes much the same energy.

HJ: Ravin said, “I wanna show you the guy I wanna cast” and showed me Gideon’s audition tape. He said, “I know I can make the movie with this guy”, so really, Gids was the first piece of the puzzle.

Emery jokes about getting Johanningmeier and Gandhi on the PR payroll for singing his praises, but he’s just as effusive about Johanningmeier.

GE: I got a shout through my agent. I’m excited by independent film but I’m wary because I’ve been burned before. If everyone is green on the set you’re in trouble. You need to have some experience on set and surround yourself in it and that’s what Ravin did. I play edgier guys typically and I think that made it interesting; here is this guy who had a backstory and you saw some evolution of how he got to the point he reaches in the film. That was interesting to me. It was nice that there was a bit of an arc to this fellow.

TG: Well you kind of having a history of playing characters that are chaotic good or ‘mizundastood‘.

I’m referring mostly to Emery’s turn as Deucalion on MTV’s Teen Wolf. The self-proclaimed Demon Wolf spent many an episode terrorizing the main characters, but we find out it’s because of past trauma.

GE: I like that, yeah. And I think that’s a lot of us on the planet. A lot are misunderstood, but not necessarily doing terrible deeds.

TG: Or rather, being able to justify them, finding a way. There was a point when I was watching the movie, we’re getting near the end, and like, this guy can’t be allowed to continue! It brings up all these questions. When you were putting the character together, how did you justify his choices in order to play him?

Victor Quinn is one whose downfall we see from the moment he enters the screen. He works at the suicide hotline center with Rebecca and takes every call personally. If he can’t “save” the callers, he spirals until he himself is ultimately suicidal. We see him go so far as to travel to a client’s house to forcibly save them and the effect only aids in Victor’s descent into the depths of darkness.

GE: For me, Victor believes so deeply in this cause. It moves on from something he’s passionate about to a calling. And that’s something I can hook into as an actor. When you’re so deeply invested in something, it’s very hard to gain perspective. It certainly justifies – not in a legal or moral sense – but an understanding of what can drive someone to behave in a certain way. I think it became a personal crusade. The moment you start judging a character you’re kind of lost. I want to find something redeemable. Even in Teen Wolf, there’s a reason for how Deucalion became the person he became.

TG: Heidi, how did you put together the role of Rebecca. She has such a past that’s rooted in drama and pain. I there something you pull from yourself when making the character authentic or was that a challenge and what kind of resources did you use to make the character approachable?

HJ: It was a combination. Knowing so many people and being an artist myself I’m familiar with depression and that world. Having lost friends to suicide. There’s that and I really wanted to honor her authenticity. I spoke with therapists and talked to people who had lost someone from suicide. I also watched videos from those who’d attempted suicide and didn’t make it to the end.

What it really did – the biggest thing it changed in my heart, and what I wanted to show was how strong these people are. They wake up every day and they are faced with this. Think about how we feel during this pandemic! This is something that dwells within them and they live it and they fight it. It gave me the greatest appreciation for people that are in a situation of managing depression and suicidal thoughts.

It was important to Johanningmeier to show Rebecca in an authentic way. She used her experience and research to help craft the character with Gandhi.

HJ: [Rebecca] wants to be strong, but draws on the hardest circumstances over and over.

Johanningmeier loved Rebecca’s vulnerability in 100 Days to Live and I shared the sentiment. Rebecca’s pain was palpable but so was her will to survive.

Here’s an exclusive clip of Johanningmeier talking about the strength of her character Rebecca and the lessons she learned from playing her.

TG: What do you want the take-a-way to be?

HJ: I’ve thought about this and there are all these thrillers out there, but I think this is different because of how much background you get on the characters. You get to travel along with them on their journey of how they got there. What I want people to take when they’re done is, I hope they think about if they had a hundred days to live what would they do? Then multiply that.

HJ: I spoke to Ravin and he told me this quote, Confucius said, ‘We have two lives and the second one begins when we realize we only have one.’ And I hope people watch this and realize today is the day and ask themselves the Rebecca Church question: What are you grateful for?

GE: I don’t think I could put it any better than that. There’s light at the end of the tunnel. And I hope people enjoy the ride of it. At the end of the day feeling like yeah, that was pretty cool, but there’s a thought that stays with you thinking about these kinds of issues.

Released in the US on February 2, 2021, the award-winning crime/thriller 100 Days to Live is available on all VOD channels and DVD.

Enjoy another exclusive where Johanningmeier and Emery talk about how they wind down after tackling such heavy takes.