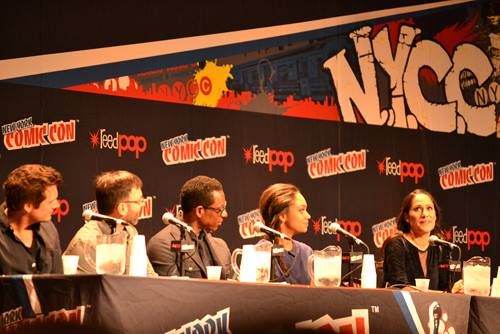 Sleepy Hollow stars Orlando Jones, Lyndie Greenwood, and Sakina Jaffrey, along with executive producers Len Wiseman and Mark Goffman, were at New York Comic Con to share insights from behind the scenes of the Fox show and tease what’s to come in Season 2.  Topics ranged from badass Frank Irving, to the Mills sisters, to “creature meetings.” Read on to find out more.

The producers told fans that this season of Sleepy Hollow will be longer than the last, with 18 episodes, which Wiseman and Goffman said gives them more room to tell the stories they want to. Goffman explained there would be a break at mid-season, and then the show would resume airing in January or February, and run continuously through the end of the season. 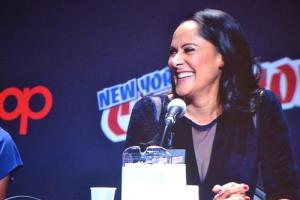 Sakina Jaffrey, who is new to the cast this season portraying Sheriff Leena Reyes, said she “didn’t get the memo” that the stern Reyes, who steps in while Frank Irving is in jail, was going to be such a “party pooper” character. However, she emphasized that she loves being a part of the show. Goffman and Wiseman revealed that they had seen Jaffrey on House of Cards and that led them to cast her, something Jaffrey says she didn’t know until they mentioned it at the panel.

Orlando Jones, who plays Captain Frank Irving, joked about the plight of his character this season: “my mom’s upset that I’m in prison!” Wiseman talked about the “promise of big twists” this season, and how on Sleepy Hollow they like to plan so when the reveal arrives, audiences can look back and see the clues were there all along.

Wiseman and Goffman then shared with fans a sneak peek of the first half of this week’s new episode. Slight spoiler: prepare to see Frank Irving as you’ve never seen him before.

Wiseman and Goffman talked about how they develop the creatures of legend for the show. Wiseman said that there are creatures coming up that will be familiar to audiences, and they like putting their own twist on them and they play with things the writers would like to see. Goffman explained how they think about what their characters are going through, and how the creature can help reveal that story. The creatures are a “very collaborative” process — Wiseman said he does sketches, then talks to the writers, and he enjoys the challenge of figuring out how it will work in the show. They have “creature meetings,” said Goffman, where they figure out the look and how the creature will be, followed by the work of the costume department, make-up department, and special effects team.

The cast admitted that they find the show scary. Sakina is often “terrified,” and Orlando Jones said even on set filming, it can be scary: “Moloch, you’re a super-freak for real!” The actors said they get caught up in what’s happening. Lyndie Greenwood, who portrays Abbie Mills’ sister Jenny, praised the writers’ work building the world of the show, and Jones said the show “is fun to do” and then the fans make it fun too. 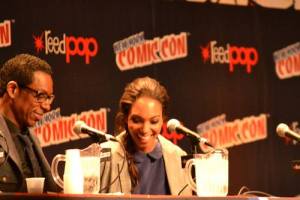 Greenwood talked about the sibling bond between Abbie and Jenny in season 2. “There has been a lot of damage… a lot of love there,” but the sisters are determined to find a way. She added that Abbie and Jenny “have to navigate a crazy world,” but they’ll make it work.

When asked if we’ll ever see “Super Sleepy,” which refers to the concept of a crossover between Sleepy Hollow and the long-running Supernatural, which has a large crossover of fan interest, Wiseman said somebody should figure that out, “because we’d love that!”

The producers then dropped a spoiler that we’ll see Ichabod discover karaoke in an upcoming episode. Jones suggested that Ichabod should sing “I Will Survive.” There will also be a scene involving yoga.

In response to a question about whether we’ll see further thoughtful portrayal of mental illness on the show, Goffman said a fantasy show offers some leeway to explore these kinds of topics. “We want to give those issues the respect they deserve.”

Wiseman discussed some cut scenes he regrets, including some “battle sequences…really exciting, fun twist on it.” Goffman added there was a scene involving Abbie and her mother they couldn’t do in season 1. This season is longer, and they’re glad they can do more–including revisiting that cut scene.

The new episode of Sleepy Hollow airs Monday, 9/8c, on Fox. Are you enjoying the new season? Looking forward to karaoke Ichabod? Have some thoughts on the show’s mythology? Feel free to shout out in the comments.

Previous:The Walking Dead 5×01 Review: No Sanctuary
Next: Doctor Who 8×8 Review: Mummy on the Orient Express