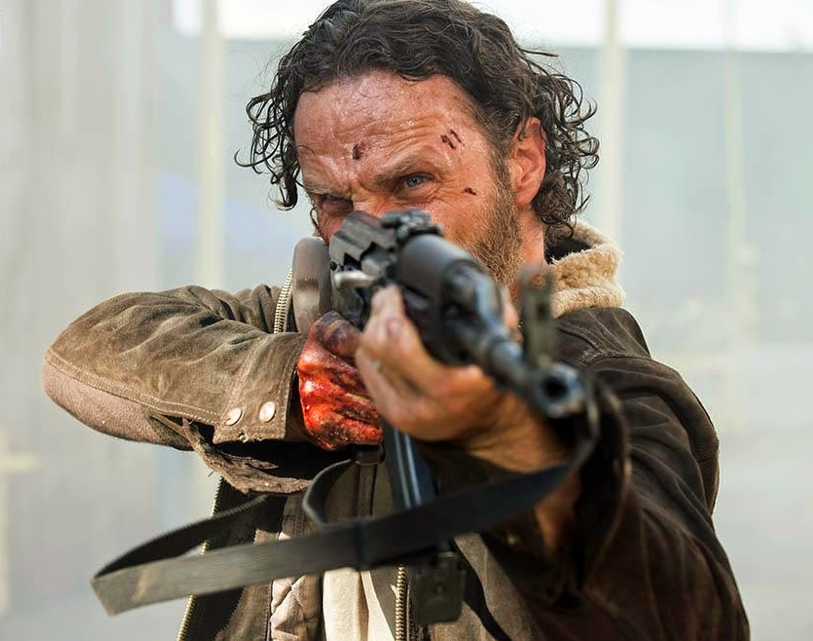 Tonight’s season premiere of The Walking Dead started on a very different note than what I expected, with the flashback to Gareth and Alex in a train car at Terminus, followed by a flash forward to Rick and company readying themselves to attack as soon as the train car door is opened. Unfortunately for them, the people at Terminus know better. They gas the car before dragging Rick, Daryl, Glenn, and Bob into their butchering warehouse. There was a bit of a surprise waiting (for both Rick and us viewers) when Sam, the guy that Rick and Carol met on their run toward the beginning of last season, was there as well – though the fact that he was still just fodder was a bit disappointing. 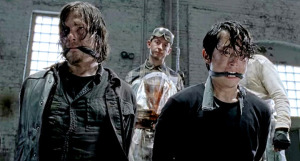 It was clear the show was teasing viewers with the idea of Glenn’s death, and Bob’s pleas didn’t add much to the scene. I have to say that it was almost impossible to pay attention to either, as they kept showing the butchering of Gareth’s brother Alex in the background. And I know I was pretty surprised that Rick gave up the list of what he’d hidden in the bag in the woods the moment they threatened Bob, of all people.

One thing that seems notable is the new show intro – it’s the first time in a long time that they’ve changed it, and I was loving the new stills, especially the ones with the graffiti (“Away with you” and “Go home”)…but in the end it was overshadowed by what was, in my opinion, one of the best ever episodes of Walking Dead.

It was great to finally see Carol, Tyreese, and Judith again (well, mostly Carol and Tyreese…), and the fact that they were instrumental in so much of what happened in the rest of “No Sanctuary” was refreshing. It seemed a bit unclear whether they stumbled upon the guard at his cabin or found and approached him on purpose, but I’d like to believe that Tyreese asking Carol if they even wanted to find out what was going on at Terminus was a big part of the reason why they were even more careful than Rick, Michonne, and Carl were last season.

Honestly there’s not too much to say about what happens next other than WOW, Carol. WOW. Though I think it was a bit rushed between seasons three and four, I really have been a longtime fan of Carol’s character development, and in “No Sanctuary” she did one badass thing after another – from dousing herself in zombie guts to blowing up the Terminus propane tank to having an out-and-out scuffle with Mary, I fell in love with her more with every moment she was onscreen in this premiere.

While Carol was wreaking havoc outside, Rick and friends were doing a pretty good job inside as well. They took out the butchers, and Rick’s decision to leave them all to turn was more proof that we’re going to see even more of his hardcore side this season. The show also didn’t hold anything back in terms of blood and gore, not even with making sure we understood exactly what they were doing with the people they killed at Terminus – though, as a friend viewing it with me noted, it was “done in a way that [was almost] tasteful”…pardon the pun.

Back in the woods, the Tyreese that Carol left behind had been hesitant to even kill a walker, but the moment his captive got loose and threatened Judith he did what he had to do. What I’m interested in is how these sudden changes in Tyreese’s character will play out throughout the season, and whether he will continue to be volatile now that he’s back with what’s left of the group.

As for Sasha, it seemed a bit much that while they were working on weapons and figuring out an escape, she was questioning Eugene about his cure. I totally understand why she – or anyone – would question him rather than immediately believe that the cure exists, but it just seemed like a bad time to do so and therefore awkward (or perhaps forced) writing. Eventually Eugene gave a speech about how he knows what he knows, but it was really just a lot of bluster and something that the show will probably drag out for quite some time. 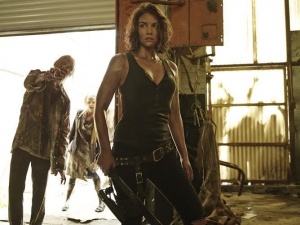 In terms of action, “No Sanctuary” certainly had a lot of it – and a lot of zombies, as well. As I already said, that made for a great episode overall, with plenty ‘edge of your seat’ moments…and I was definitely shocked that it meant the end of Terminus as well, even after Rick expressed his desire to go back and kill the rest of the survivors. Carol’s return to the group – complete with a sweet moment between her and Daryl, though thankfully not one that was over the top –  and Rick and Carol’s reunion with Judith changed Rick’s mind about going back, but I have a feeling we haven’t seen the last of some of the Terminus people. Or I hope we haven’t, considering all of the lead-up to Terminus last season.

While I’m glad that the show isn’t wasting too much time there (::cough:: Hershel’s farm ::cough:: prison ::cough::), as I said, it’s still a bit surprising that they may actually be moving on this fast. But it seems that they have a lot of ground to cover, and at least some idea of where they’re going – at the end of “No Sanctuary”, they go back in time briefly and show what seems to be a well-known comic book character as the man who ruined Terminus…and flash forward to show that Morgan of all people is coming back into the picture!

On the Talking Dead episode following the premiere, Greg Nicotero mentioned that one thing this episode was meant to portray, something that will continue to be a theme throughout the season, is that “good people can be turned bad”. That’s certainly something to keep in mind, along with Gareth and Mary’s insistence that “you’re either the butcher, or the cattle”.

In the meantime, can we all just breathe a sigh of relief that Walking Dead is back and there’s another new episode just a week from tonight?

3 thoughts on “The Walking Dead 5×01 Review: No Sanctuary”