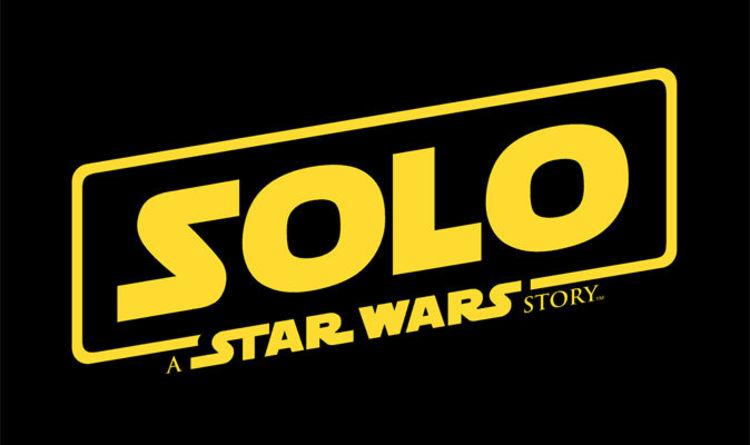 After all the drama surrounding the Solo: A Star Wars Story production, I was fully prepared to be disappointed…but then the first reviews started coming out, and most of them were so insanely positive that I was suddenly worried it wouldn’t live up to the hype. The end verdict? It wasn’t at all what I expected, but yes, I really, really enjoyed it.

WARNING: This article contains spoilers for Solo: A Star Wars Story.
SERIOUSLY. Read at your own risk.

Of course Solo wasn’t perfect, but it was a hell of a lot better than the production news led me to believe it would be, and I’d be hard pressed to disagree with previous reviewers who extolled its virtues. That said, I’m going to get this out of the way immediately – I’m not sure what possessed them to cast Emilia Clark in the role of Qi’ra; as actresses go, I don’t mind her, but wow, she did not fit this role. She wasn’t believable as the love interest in the beginning, and I continued feeling awkward during most of her scenes for the rest of the film. The ending in particular left me thinking, “But WHY?” and just kind of hoping that they never go anywhere else with her story line. And I really don’t believe it has to do with the way her character was written – the acting was just that awkward.

(And yes, I get it, Star Wars movies have never really been known for their acting, and I of all people am usually the last person to nitpick about their acting, but there’s a difference between not being Oscar-worthy and simply being completely wrong for a role.) 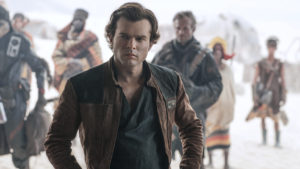 Okay, sorry not sorry, I just really had to get that off my chest. Now on to the good, because there was a lot of it! While I’m still not entirely sold on Alden Ehrenreich as Han, I think that may just be because I’m used to an older, rougher Han Solo rather than the boyish, trusting version presented in this movie. It wasn’t until about halfway through Solo that I found myself thinking, “Dang, I really like this guy”, but that feeling stuck with me through the end. Not surprisingly, some of the best moments of the movie were when Han had – for lack of a better term – one-on-one time with the Millennium Falcon. The look on his face the first time he saw her? That was a perfect introduction to what is, by far, a better love story than this Han and Qi’ra nonsense. 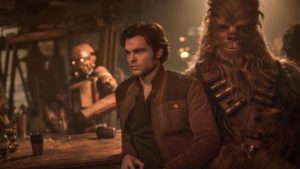 Speaking of better stories, Solo‘s version of Han and Chewie’s meeting and subsequent partnership was far superior to the one fed to us by the EU many many years ago…and speaking of origin stories in particular, I would be remiss if I didn’t shout from the rooftops that Lando and Lando + Han were my absolute favorite parts of Solo. I didn’t at all doubt this would be the case – since when does Donald Glover not steal every scene he’s in? – but when it comes to chemistry, Lando had it with everyone, including (perhaps especially) his droid, L3.

Han and the Falcon, Han and Chewie, Han and Lando, Lando and L3…all better love stories than Han and Qi’ra. 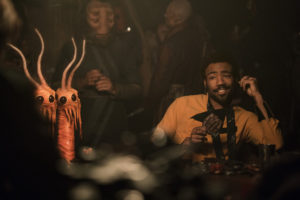 Solo was action-packed from beginning to end, and it was funny without being too in-your-face about it (something that The Last Jedi didn’t quite master). My favorite scene was probably L3 starting the droid/slave uprising on Kessel, and while I think The Maw scene was too drawn out, it was still really damn cool to see Han and Chewie do a Kessel Run in…well, *about* 12 parsecs. As Star Wars references go, that was clearly a winner; another really interesting (if somewhat throwaway) reference was Qi’ra’s fighting style, Teräs Käsi, harkening back to an old (and generally not well-regarded) Star Wars Playstation game. And while these aren’t so much references as mini origin stories of their own, the explanation for Lando’s pronunciation of Han and HAN SHOOTING FIRST were awesome inclusions. On the other hand, not so awesome? Solo‘s version of how Han got his last name. Don’t even get me started.

Really, as origin stories go, Solo was far better than I expected. It was essentially a heist film set in the Star Wars universe, much like Rogue One was very much a Star Wars version of The Dirty Dozen. And I liked Rogue One, but Solo was just plain fun. I actually left the theater wondering, ‘what’s next?’ because whatever it is, I want to see it.

(Yes, even if I have to suffer through Emilia Clarke’s Qi’ra again. I mean, at least her future apparently involves DARTH MAUL…)

What did you think of Solo? Let us know in the comments!

Previous:Everything You Need To Know About “Reverie” Before The Premiere This May