“Speak No Evil” Issue 2 Amps Up The Blood and Gore, Introduces Female Protagonist! 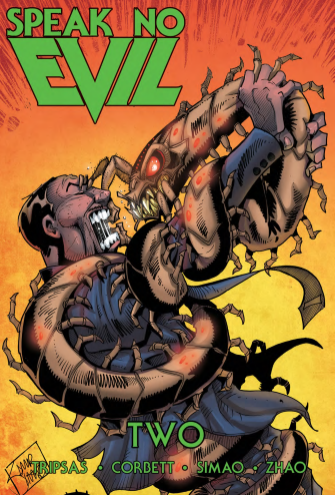 Speak No Evil Issue 2 picks up after the events that occurred in the first issue, amps up the blood and gore, and introduces the horror-comedy indie comic book series’ female protagonist, Effie!

I enjoyed reading Issue 1 of this series. The story has a lot of potential and interesting lead characters. While the debut issue showed Nikola Tesla and H.P. Lovecraft’s interest in the supernatural, Speak No Evil Issue 2 was more focused on Silas and Edwin. Being chased by Nix and his gang, they ended up finding the scientist’s cabin and equipment.

Silas picked up a gigantic gun while Edwin picked up gloves that created a shield, giving our heroes something to fight with. Their first enemy ended up being a centipede-like demon named Aathemon who’ able to possess beings.

Writers Justin Corbett and George Tripsas really amped the blood and gore in Speak No Evil Issue 2. This is a horror-comedy series after all so I really enjoyed seeing all of the horrible deaths. Samir Simao’s cartoony art style added a lot of movement in every panel. Chunlin Zhao colors helped set the tone.

I’ve been looking forward to being introduced to the series’ female protagonist, Effie, and I have to say she didn’t disappoint. I want to know more about her but for now, I’m happy to see that she can take a hit as well as fight back. She does talk about being able to tell a person’s fortune through her cards. So, perhaps she’ll have some kind of ability to sense supernatural presences close by and help the boys figure out how to stop the demons? Let’s see.

There was also a mini-story featuring Charles, Tesla, and Cadbury the goat. The story made for some fun couple of pages but you can’t help but feel a bit sorry for the characters because you already know what happens to them in the near future.

The Kickstarter for Speak No Evil Issue 3 is already underway. So, check it out. The team is aiming for $4,800. They also have some cool perks up for grabs.

Have you started reading the Speak No Evil series yet? Are you excited about Issue 3? Let us know.