Star Trek Beyond is Delightfully Episodic

Imagine you’re at a bar with you’re friends – who are all geeks because let’s be real you’re reading The Geekiary – and someone asks what you would do if you could write an episode of The Original Series with the cast of the reboot. Think about the kind of responses you would make, then imagine someone picked all the best bits and gave you a massive budget to make it a reality. That is Star Trek Beyond. That might sound awful, but somehow it works because Star Trek Beyond is a delightful romp through space.

Seriously though, this movie’s got everything: Kirk’s confessionals, deep philosophical questions about the nature of humanity, cute tiny aliens. Bones and Spock are forced to work together for a good chunk of the story and it’s great. There’s an interesting, albeit rather predicable twist, and Kirk gets tricked by an alien woman. The crew is stranded on a rocky planet, Uhura gets a fight scene, and while Kirk and Spock don’t get as much screen time together the theme of the movie is very much tied to their relationship.

Pretty much every review points to the fact that Star Trek Beyond feels very much like an updated big budget episode of The Original Series in the way that the first two JJ Abrams reboots didn’t. That’s not to say that I didn’t love the 2009 reboot, because I did and Beyond definitely fits into the new canon. It’s just that while Star Trek (2009) felt like sometimes JJ Abrams was trying to make a good movie in spite of the source material, Beyond feels like it’s been made by fans.

Is this film perfect? Well, no. It’s still a reboot so it loses points for originality and it doesn’t really add much to the Star Trek Universe. They make a decent attempt to diversify but there’s only so much you can do when your main cast is already mostly straight white men. Making Sulu gay was a stroke of genius, my queer heart almost burst when I saw him embrace his husband – although the cynic in me was like “why no kiss?” What can I say, I want it all.

The thing about Star Trek Beyond is that most of the reasons I loved it are the same reasons you might not. It feels like an episode of The Original Series and as a result it also feels incredibly familiar. The structure, the action, the themes, the story, have all been told before. It also relies on suggested familiarity and fatigue that isn’t really possible outside a long running television series. We’re supposed to assume that the situations the crew find themselves in are all too familiar, which I was able to do as a fan, but also comes as an abrupt shift from Into Darkness.

It’s a ensemble movie, in that each member of the crew gets a chance to shine and we get to see more of their dynamic as a group than we saw in the first two films. As a result, some characters get shortchanged. Mostly notably Sulu and Uhura are sidelined a little, which is incredibly disappointing. The stuff they do get is great, and watching Zoe Saldana and Idris Elba play off each other was great, but it definitely felt like they drew the short straw. 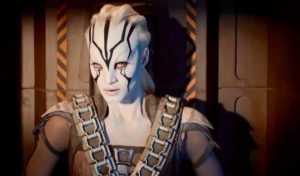 That said the pros of Star Trek Beyond definitely outweigh the cons. Sofia Boutella’s Jaylah is about to be everyone’s favorite character. She’s lovable and she’s not forced into any romantic subplots. Instead she spends most of her time with Scotty who’s more like a father figure (don’t hate me for saying that Simon Pegg). Idris Elba plays a great villain, of course he does, the man can do anything. But seriously he adds much needed weight to a character that was probably one of the weaker aspects of the film.

There is a specter of sadness hovering over the film, with the loss of Leonard Nimoy last year and of course the shocking loss of the wonderfully talented Anton Yelchin. Every time Chekov is on the screen there was a wave of emotion I was not expecting, no matter that he was phenomenal. The film pushes through this sadness and when the words “For Anton” flashed on the screen as the credits rolled it felt like a celebration of his talent and his life. There’s no way to cut through the tragedy of losing someone so young but it’s a lovely send off.

All I can really say about this film is that I left the cinema with a giant smile on my face and that’s all I could possibly ask for from a summer blockbuster. Definitely worth seeing, especially if you’re a fan of The Original Series. Star Trek Beyond boldly goes where it’s gone before but it sure does have fun along the way.