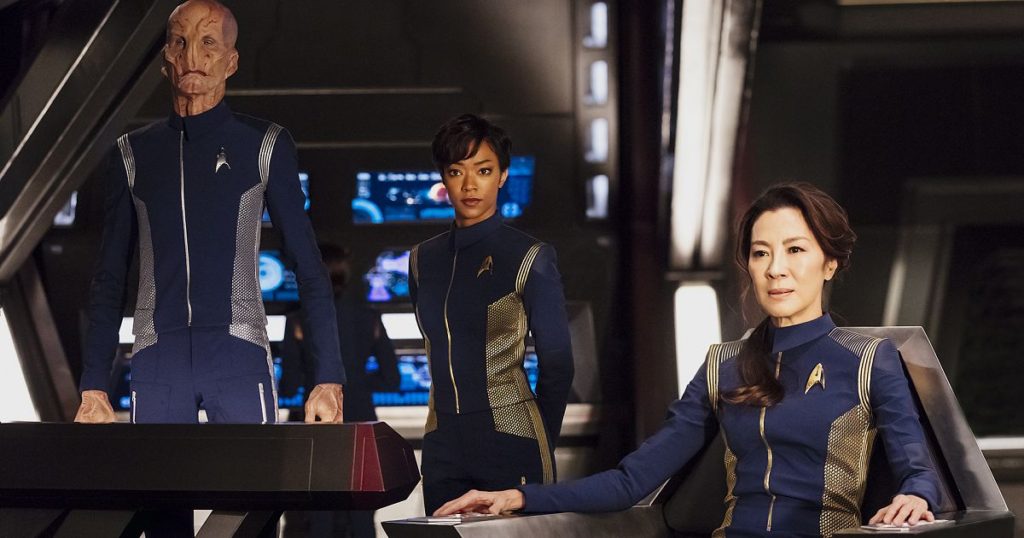 Star Trek Discovery is everything that I want and needed out of a Star Trek series.  I instantly adore the characters and appreciate the effort to be inclusive with their casting choices.

Let’s get this out of the way first.  If you are upset at diversity being “crammed down your throat,” then having the pilot episode of Star Trek Discovery feature two women of color passing the Bechdel test in the first 90 seconds of the episode likely annoyed you.  Sadly, this show probably isn’t for you.  And that’s alright.  Not everything has to be for you.  There’s plenty of media out there with straight white male protagonists to satisfy your needs.  In fact, the majority of the existing Star Trek TV franchises have straight white male leads, so you don’t even have to go very far.  But for the rest of us that value inclusion and diversity, this show is incredibly exciting.  But it doesn’t stop there.  They don’t just throw in random diverse characters to check of boxes on some sort of inclusion checklist.  These characters are good.  They are interesting.  And I can’t wait to see what they come up with next.

Our protagonist is Michael Burnham, a woman who was raised by the Vulcan Sarek (yes, Spock’s dad) from a young age after her parents were killed by Klingons.  I must admit to my own bias here. Vulcans are by far my favorite thing about the Star Trek universe, so regardless of the aforementioned casting choices I would be deeply enthralled by this plot element.  While many fans seem upset that Michael breaks the Roddenberry Rule (protagonists aren’t allowed to be malevolent or cruel), I think it makes her all the more interesting.  She has some trauma she’s working through and being raised by an emotionally restrained species likely didn’t help her cope with that.  The first two episodes have set her up to be a character I’m immediately intrigued by and connected with on a deep level. I want to explore her emotions and see more of her childhood.  Did she interact with Amanda or Spock?  Was she kept completely separate from them?  How did she work through the horrors and memories of losing her parents? I need more details.

The other lead of the first two episodes is Captain Philippa Georgiou, portrayed by the ever wonderful actress Michelle Yeoh.  The character’s fate is somewhat spoiled heading into these episodes by listing her as a “special guest star,” but I was nevertheless heartbroken to see her go.  The relationship between Philippa and Michael ran deep and I’m sad to think about how Michael will deal with her loss going forward.  For the short time we had her, though, she was everything I wanted out of a Captain.  She was dignified and adventurous.  She was brave and compassionate.  She will be missed.

Though it’s hard to get to know so many characters so quickly, Star Trek Discovery managed to introduce Saru in this short amount of time as well.  Saru is a Kelpien, which is a new species in the Star Trek universe.  Of the three characters we go to know this episode, he was perhaps the one we know the least about at this point, but nevertheless I managed to care about him very quickly.  I’m glad that we get to keep him and learn more not only about his species but about him as an individual as well.

Fans of the Star Trek franchise have many legitimate complaints about the show, but I have faith.  While the appearance of the Klingons and the anachronisms that don’t mesh with established Star Trek canon can be frustrating for many die hard fans, I know many others who have managed to look beyond them and enjoy the new series for what it is.  For a lot of fans, it’s the first time they’ve been able to watch a Star Trek series live.  For others, it’s just exciting to have any series airing again.  So sure, there are critics and they are in the right to have their opinion, but the enthusiasm I see online from others gives me high hopes.

Star Trek Discovery has quickly become one of my favorite shows and we’re only two episodes into it.  I can tell my Sunday evenings will be spent counting down the minutes until I can watch the show, which is a relief because after Game of Thrones concluded my Sundays have been quite dull.  Now I have a legitimate reason to be tired and grumpy on Monday mornings again. Hooray!