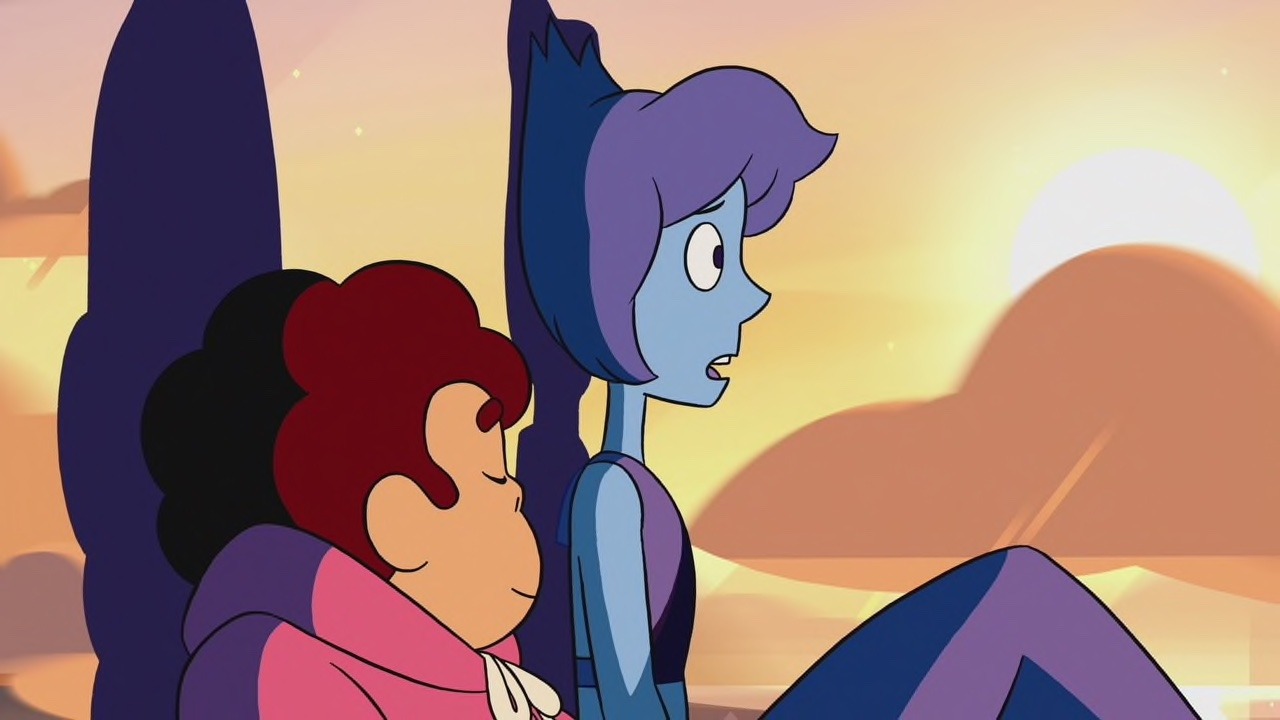 Things will never be the same in Steven Universe after Steven discovers something unexpected on the moon, in this episode aptly titled “Can’t Go Back“.

“Can’t Go Back” starts quietly enough with Steven finishing up his night time routine and bidding Peridot a good night (apparently, she’s still living in his bathroom). He is just about to sleep when Ronaldo starts banging on the beach house door, yelling about finding something weird on the moon. Steven grumbles about Ronaldo finding something weird every night since he became Beach City’s lookout, but still goes to check it out. 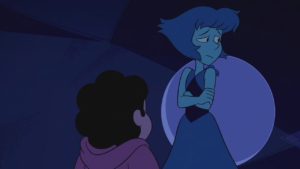 At first, Steven thought Ronaldo just meant the Moon Base, seemingly unchanged since we last saw it in “Back to the Moon“. But then Ronaldo starts asking questions like, “Why does it look like a barn?” And indeed, a little distance from the base was the barn Lapis and Peridot shared before Lapis flew off with it in terrified anger. Steven superwarps with Lion to the Moon Base to investigate, bouncing around from inside his bubble to head over to the barn. Everything seems intact, meepmorps and all, but nobody was home. Steven returns to the Moon Base, probably to head on home and get some sleep, when he hears someone humming from upstairs. He climbs up to the room with the strange orb he noticed during the first visit to the moon. And sitting in front of the orb was none other than Lapis Lazuli herself.

Steven is glad to see her, but also admits his surprise. He thought she’d be halfway across the galaxy by now, since she wanted to be as far away from Earth as possible if/when the Diamonds came. Lapis admits that she did reach the edges of the Milky Way… but then, she felt lonely. She couldn’t bear not knowing what’s going on with the people she cared about, so she came back. But at the same time, she believes that she can’t go back to Earth, not after the way she left and hurt Peridot. So she stayed on the moon instead, spying on what’s going on with Peridot, Beach City, and the rest of the Crystal Gems using the strange orb. Apparently the orb is an observation device that lets the Diamonds monitor the progress of a colony from a distance. This raises a lot of questions about how much the Diamonds actually knew about the rebellion, not to mention the creepy implications of this level of invasion of privacy.

Lapis laments about how things can’t go back to the way they were before she left, but Steven tells her that that’s not necessarily a bad thing. Things being different could be just that– different. During their heart to heart, Lapis seems encouraged about finally returning to Earth, about staying and fighting for her home with the people she has grown to care about.

He sees a vision of the Diamonds in shadows, of Blue scolding Pink for complaining about the progress of the Earth colony. Then another shadow enters, shaped in a very familiar figure– Pearl. And she’s holding Rose’s sword.

Steven startles awake, reeling from learning something he can’t go back from: the possibility that Pearl had been the one to shatter Pink Diamond. When he tells Lapis about his vision, however, Lapis panics about the Diamonds coming and runs away. Again.

Lapis: “I’m leaving. You should be used to that by now.“

For the longest time, Lapis’s character has garnered a lot of mixed and extreme reactions from fans. Most probably because her problems and issues–and the way she deals with said problems and issues–often hit too close to home one way or another, so it’s easy for things to get a little too personal when talking about her. 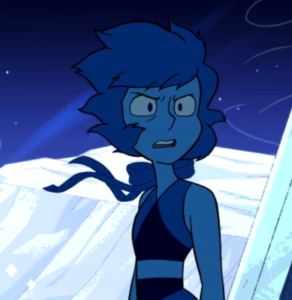 One of the common criticisms I’ve seen about Lapis’s character is that she keeps doing the same things over and over, like she never learns her lesson. While “Aesop Amnesia” is a legitimate (albeit often scorned) trope in media, Lapis also has legitimate mental problems. The way she keeps running away to avoid getting hurt, how she has trouble understanding how others could be well-adjusted, the way her behavior hurts herself and others (whether she’s aware of it or intends it or not), but she can’t stop herself because of how deeply ingrained her fears and anxieties are… Lapis is a realistic depiction of someone dealing with long-term trauma. People don’t bounce back and overcome their problems as easily and as quickly as most fiction would have us believe. Recovery is a long and difficult process, and it often feels like you’re taking two steps back for every step forward, and the show acknowledges that.

While mental issues don’t excuse being a jerk– and Lapis has done some very damaging things– they do help in understanding where the character is coming from in their behaviour. And for all her flaws, she does want to do better and to be a better person. But wanting to change is only the first step, and so far, she keeps messing up and keeps going about things in unhealthy ways.

For example, here in “Can’t Go Back”, her efforts to ensure her own safety before anything else has led her to withdraw and to push others away– thus hurting the very same people who care about her and want to help her.

Lapis: “I was so sure the Diamonds would destroy my new home, that I did it myself. It’s like I’m back inside the mirror, except I put myself here.“

I think it’s too easy to hate characters who run away from the fight because they’re afraid, because we see ourselves in them. We see the parts of ourselves, the cowardly and fearful parts, that we wouldn’t want to admit we have. Not everyone can be brave and strong in the conventional heroic archetype sense. We all have our fears that make us freeze up or run away to save ourselves, and self-preservation is a valid and understandable motivation. I don’t think there’s anything wrong with wanting to put your own safety first, and even airplane emergency instructions emphasize putting your own oxygen mask first before helping others.

That’s how Storyboard Supervisor Hilary Florido and Jennifer Paz (voice of Lapis) put it in the Steven Universe Podcast about Lapis: “She is just putting on her own mask first.” Like the instruction provided during every airplane flight, you can’t help anyone if you can’t even help yourself. While “Can’t Go Back” feels like a major turning point in her character arc, Lapis still has a long way to go. She still can’t let go of everything that’s happened to her, and until she does, she’ll most likely keep putting and finding herself in situations where she’s isolated and vulnerable.

Previous:Free! Dive to the Future Releases Teaser Ahead of July Premiere
Next: Everything Leading Up to the Pink Diamond Reveal in “A Single Pale Rose”