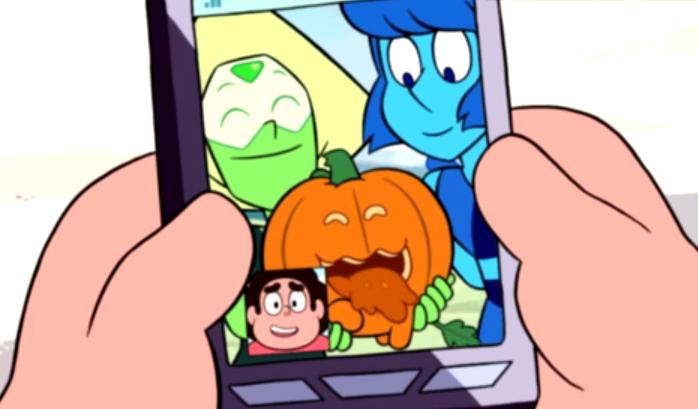 Two episodes into this Stevenbomb and it just won’t stop tugging on my heartstrings! The most recent Lapis and Peridot episodes have been pretty upbeat, so I was hoping that “Raising the Barn” would be as well; unfortunately that was not the case.

It’s obviously going to take some time before Steven and Connie solve their issues. Poor Steven, still waiting for her to respond to him…but also poor us viewers for not getting to hear that song he was about to sing because it was interrupted by a call from Lapis, Peridot, and Pumpkin. Still, I was excited that he rushed off to visit them, even if he did so because Lapis freaked out when he said he’d run away from Blue and Yellow Diamond. 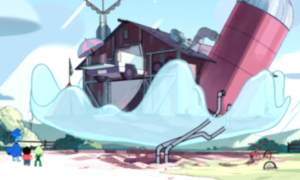 It was also pretty obvious from the start that Peridot did not share Lapis’ desire to leave Earth, but of course neither Lapis nor Steven picked up on that right away. Instead of seeing Peridot’s excuses for what they were, Lapis found a fix for all of them, insisting that they could leave and bring the entire life they’d built together with them. It’s always been obvious that Lapis is a powerful gem, but it was still surprising to see her take the water from their “smaller than average lake” and use it to raise the entire barn off the ground.

Thankfully Peridot had one more excuse up her sleeve – Pumpkin had run (or wandered) off while they were talking about leaving. They all went in search of her, with Steven and Peridot splitting off from Lapis. This meant they got to talk about Lapis, and everything Peridot said made me love her all the more. Not just because she literally bent over backwards trying to make Lapis feel better, but because she recognizes things like the fact that Lapis having gone through so much means she needs consistency.

Of course that doesn’t excuse the fact that Lapis was right – Peridot was essentially lying to her about wanting to leave Earth. Sure, Pumpkin clearly didn’t want to leave either, but Peridot definitely should have explained how she felt to Lapis much earlier. There is a really strong and obvious lesson to be learned from this: it’s always important to be tactful, but you can’t just avoid being honest because you don’t want to upset someone you care about. Besides, her reasoning for wanting to stay was definitely good – she wants to be there in case something happens, she thinks they should stay and fight for the life they built instead of tearing it up out of the ground – because Earth is their home, and it’s worth fighting for. 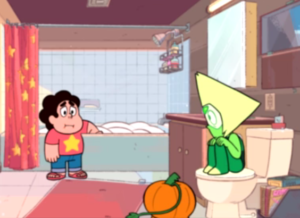 I also love how much Peridot believes not just in the group as a whole, but in Lapis as well – she started by saying she thinks *they* can win, and then clarified, “I think *you* can win!” Unfortunately, Lapis isn’t ready to fight again; after all, the last time she got caught up in the middle of a war she got imprisoned in a mirror for ages. All of this is certainly understandable, but it was quite a blow that she still took the ban with her even though Peridot was staying behind. This puts Peridot back where she was when she first got stuck on Earth – living in Steven’s bathroom – and I can only hope that Lapis doesn’t stay away for too long. Whatever their differences are, Peridot understands her, and for her part, Lapis tends to rein Peridot in a little bit.

Plus, I don’t know about you, but I always need more of their general shenanigans in my life.

What do you think about “Raising the Barn” and Lapis’ departure? Let us know in the comments!