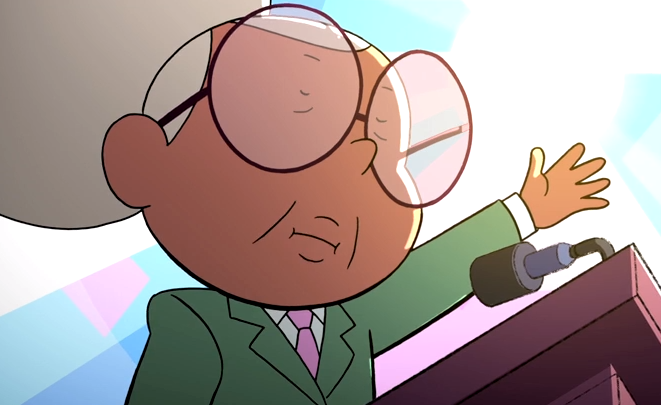 Things get political in Beach City when Nanefua runs for mayor in “Dewey Wins.” 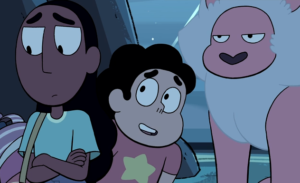 Steven is back from space after a fraught encounter with the Diamonds on Homeworld (and a six-month/161-day hiatus, not that we’re counting or anything). Connie is glad he’s okay, but furious at him for leaving her behind, and rides away on an equally irate Lion. Steven doesn’t understand why Connie can’t see that his decision made sense; he was the one who told Peridot the names and got the humans abducted. In the end, no one got hurt — except for Lars, but Steven saved him, too.

But Lars is still lost in space, and Connie still won’t talk to Steven.

Steven runs into a suitable distraction in the form of Nanefua’s mayoral campaign. The rest of “Dewey Wins” is a pretty light boardie episode, although it never quite lets you forget that something bigger is happening in the plot at large. 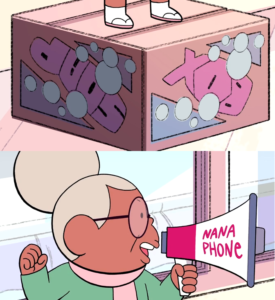 Nanefua’s campaign is built on an anti-Dewey platform. She hollers into her Nana Phone from atop her literal soap box that “Billiam” Dewey did nothing while aliens nearly abducted the whole town. Apparently Beach City can be visited by multiple space ships causing property damage on a town-wide scale… but when you mess with the people of Beach City, that’s the straw that breaks the camel’s back, the impetus for Nanefua to step up as Mayor Dewey’s first-ever political opponent. This thought carries through nicely to their debate, and the climax of the main plot of “Dewey Wins.”

Blaming our problems completely on the mayor is not getting us anywhere. When one of us suffers, the town suffers. When you suffer, Mayor Billiam, the town suffers. So, no longer will I point my fingers at you. I will extend ALL my fingers, on BOTH my hands to everyone here today, and ask that we share responsibility for the welfare and safety of Beach City, together!

In the face of this inspiring speech, the citizen formerly known as Mayor Dewey cedes the race to Nanefua and tromps off to find a different job. Maybe he can lend Sadie a hand and pick up Lars’ shifts at the Big Donut? Either way, the title “Dewey Wins” is a great reference to the infamous “Dewey Defeats Truman” headline, in which the Chicago Daily Tribune incorrectly printed that Harry S Truman lost the 1948 American presidential election. 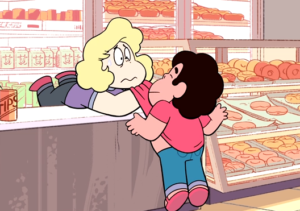 Earlier in the episode, Steven goes to Sadie to tell her what happened to Lars, and she pretty understandably breaks down in tears — all the while contrasted with the cheery, upbeat Big Donut background music. She’s both relieved that Lars isn’t dead (sort of), and horrified that he’s a wanted fugitive in an alien dystopia. Steven confesses that he hasn’t told Lars’ parents, and Sadie promises to help him… only for him to get about half-way down the boardwalk before being distracted by the ‘plight’ of Dewey’s campaign.

Sadie is left to do the explaining herself, and while on an individual level I’m frustrated we didn’t actually get to see that heartbreak up close, narratively it does make sense. Not just because it cuts down on repetition, but because it makes it very clear what Steven is doing. For a boy always so eager to help others emotionally, he shies away from introspection. Steven is reeling from the traumatic events of the Wanted Arc, frustrated by his family’s reaction, confused by Connie’s, and avoiding addressing any of these problems by focusing entirely on Dewey’s instead. Even when Dewey says some stuff that maybe should make Steven reconsider whether he’s actually right for the position (not using Lars’ name even when told it directly, and being completely dismissive of Buck, for example), our boy is just too stuck on his path to see where he’s going. 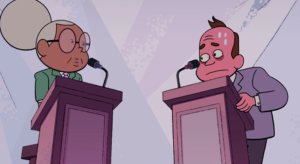 After Dewey drops out of the race, Steven expresses feelings of betrayal that he would do so without consulting him first. It was maybe a heavy-handed way to get Steven to be able to empathize with how Connie must be feeling, but hey, eleven minutes is an incredibly short amount of time to pull off a one-episode story arc (Dewey vs Nanefua) and maintain a longer through-plot (Connie’s reaction to Steven turning himself in to Homeworld). It is cathartic to hear Steven come to understand that his actions might not have been wrong, but caused intense distress all the same. Cathartic, and a bit tragic, as that is something Rose Quartz herself must have felt many, many times.

Overall, “Dewey Wins” serves as something of a whole episode callback to 1×50 “Political Power,” from Nanefua and the Beach Citizens expressing anger at how Dewey handles the dangers assaulting the town, to Steven using Dewey as a way to understand the emotions of the people close to him. But “Political Power” was a lead in to the action, one last breath and moment of comfort before the danger ramped up. This is a cool down, offering understanding, but no comfort to be found, only questions.

We know from AJ Michalka that Stevonnie will feature prominently in upcoming episodes, so we have to assume Steven and Connie will heal the rift between them. For now, Steven is left with one-sided text message conversations and unanswered phone calls. 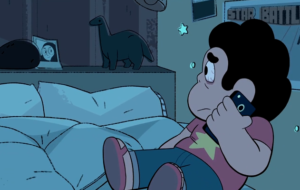