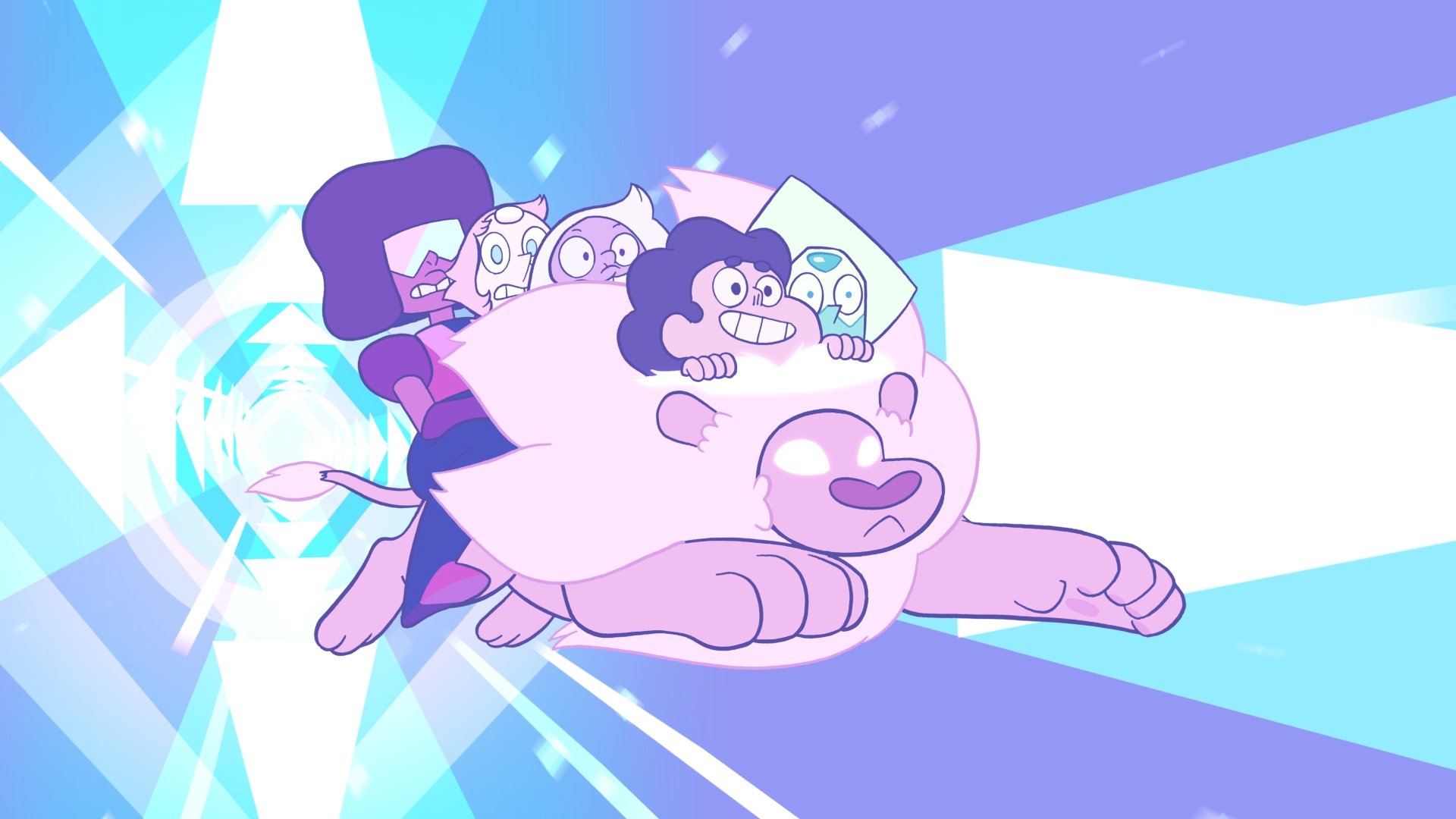 After two essentially stand alone episodes, “It Could’ve Been Great” – the third episode in this fourth Steven Universe “bomb” – finally moved the current story a few steps ahead.

It certainly didn’t give me all the feelings like “The Answer” did or have the cute Steven-Connie aspects that we saw in “Steven’s Birthday”, but I did like seeing/learning more about Peridot. Steven Universe is a show that does a lot of slow and steady building, and every time they do a little more my love for it grows exponentially. 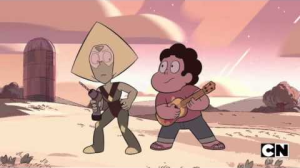 The episode began with another great song that even seemed to quell Peridot’s workaholic attitude, and I loved that she was the one who sang the final line, “Is there any thing that’s worth more than peace and love on the planet Earth?” Of course what happened at the end made me question her devotion to such an idea, and upon listening to the song again, I do think she sounds a bit more unsure than I noticed at first.

It was also nice to get a better base timeline of how long they’ve been working at the barn, when Steven says it “feels like yesterday she was trying to kill us” and Pearl clarifies, “No no, that was several weeks ago.” For some reason her nonchalant response amused me, probably more than it should have…but then she did the Pearl thing and acted like Steven shouldn’t be so excited about the fact that they needed to go to the moon. Sigh.

Lion, however, was completely awesome! With his napping prospects being threatened, he jumped (ha, literally) to help the Gems warp to the moon, even though doing so clearly wore him out. But at least he got to rest while they explored the moon base.

I have to admit that even though there is a huge Steven Universe fandom online, one that cultivates some really awesome and usually legitimate theories, I myself haven’t gotten overly involved in it (sad but true, I just don’t have the time). Therefore while some of what we learned in this episode may be old hat to a lot of fans, it was new (or at least new-ish) to me – and we learned quite a bit. Steven was able to bounce around as a “Moon Boy”, but the other Gems couldn’t because their “physical forms adjust automatically to the gravity of any planetoid”. Additionally, Peridot explained that the Diamonds are matriarchs who rule all things and that the other gems “live to serve them”. However, when Garnet reacted with consternation, Peridot corrected herself just slightly, saying that the other gems were “made to serve” the Diamonds. 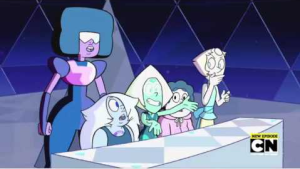 There were also huge portraits of Blue and Yellow Diamonds! Yay more clues to what they look like! But “It Could’ve Been Great” also opened several questions – what’s that blue sphere floating in what appeared to be liquid? How frustrating that Garnet was too on track for us to see or learn more about it! Also they flipped through the geometric renderings of the “structures” that the gems built on Earth quite fast, and I’m not sure if all of them even still exist. One of them appeared to be Stonehenge, and there was a pyramid maybe? Or pyramids? I really hope this is something they explore more in the future.

As I already mentioned, character-wise this episode was definitely focused a lot on Peridot. And maybe it’s just me, but the longer she’s with the Crystal Gems, the more it seems like her reactions aren’t really matching up with her general character, and at times in this episode it was particularly jarring. But she also had some really great moments – getting super excited about sitting in the throne/chair even after chiding Steven for doing so, for example. And I have to admit that I kind of love her social awkwardness – how she doesn’t understand that calling Amethyst’s kindergarten “impressive” isn’t really a compliment/good thing, and more importantly her tangent about how the Crystal Gems merely delayed Earth’s inevitable downfall.

Of course Steven was honest about his disappointment in her, and it was really sad to see how much it clearly hurt him that Peridot still doesn’t truly understand what the Gems fought for – what they are fighting for. I thought for a moment that his reaction would lead to Peridot apologizing or something like that, but instead she stole the crystal from the throne/chair. Thankfully, even though she tried to hide it from Steven, she did a very bad job doing so. She obviously knows what the crystal is and/or what it does and I can’t imagine that she has positive plans for it, but hopefully Steven will thwart her before any more damage can be done. It was bad enough seeing him lose so much faith in her

I guess my question is, was he expecting too much? Sure, she’s been with them a few weeks, but that’s not a very long time, especially when you’re trying to change someone’s ingrained values. Personally I hope the writers give her a bit more leeway and time rather than have her immediately prove that she’s still completely loyal to the Homeworld Gems and bent on destroying Earth.

Previous:WiSHCon: The First Ever Convention Celebrating Women in Sci-Fi and Horror
Next: FEELINGS…with The Geekiary Ep 11: December 2015