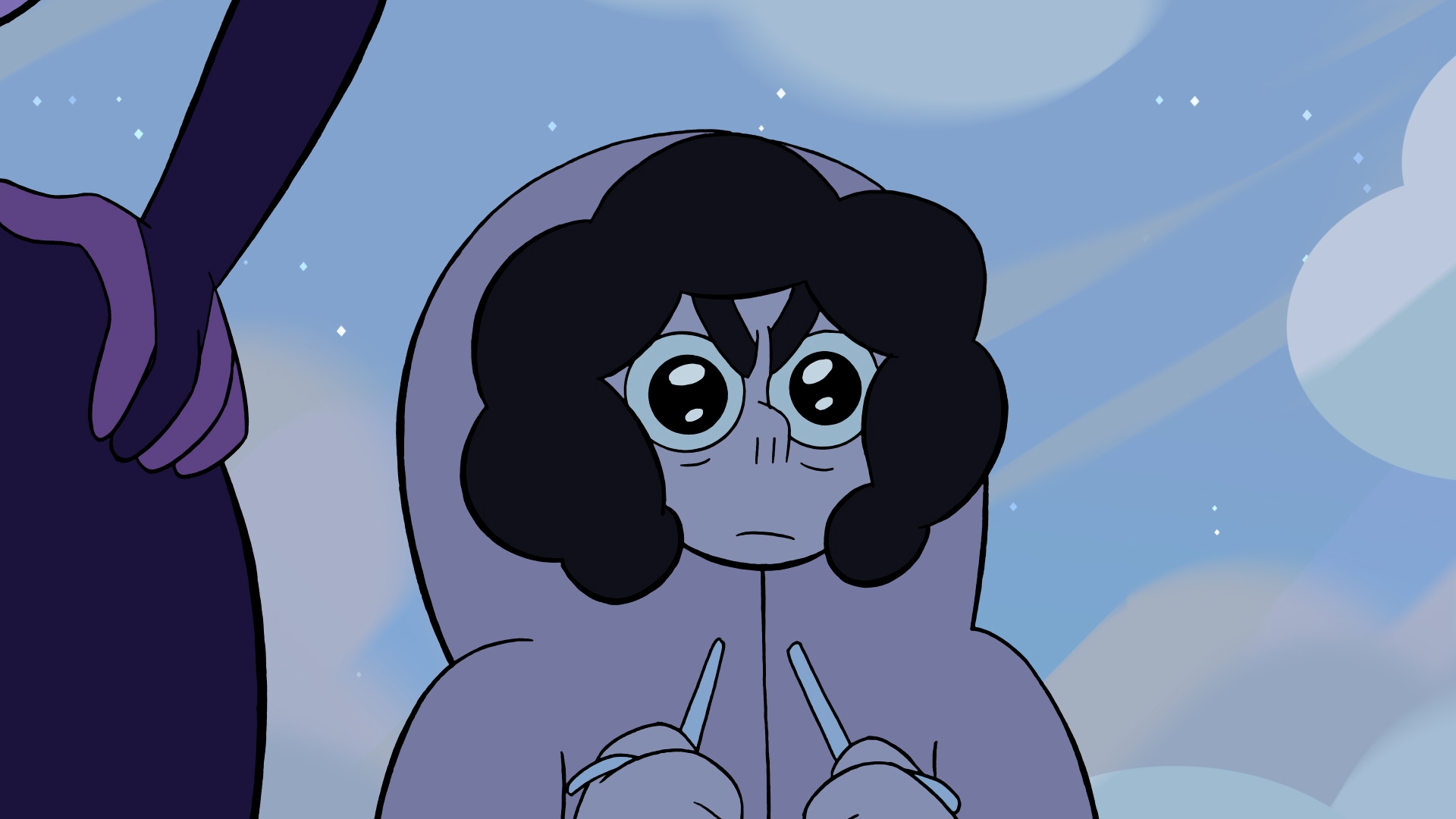 Warning: Please note that this article contains spoilers for Steven Universe 2×25: “Message Received”.
While we don’t usually give spoiler warnings for episode reviews, I am attempting to make sure that no spoilers show up in any preview blurbs for this particular article.

Because can we all just breathe a sigh of relief over everything that happened in this entire episode of Steven Universe?

Yeah, it began with angry Steven, which makes me sad…but also he’s still so cute when he’s angry. Gosh I love this show. 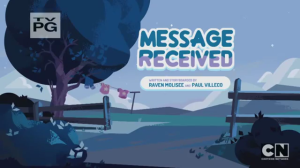 The big thing I noticed from his first interaction with Peridot was that she clearly knew that she’d done something wrong. I wasn’t fond of honest little Steven asking about the Diamonds rather than confronting her, but you know, he’s [half] human. Peridot immediately launched into how awesome the Diamonds are – that they’re in charge and objectively better than everyone else. The fact that she believed that all other beings are flawed but Diamonds were flawless was frustrating, but also made me feel bad for her…mostly because it looked more like she was brainwashed than anything else. Especially when she described “her” Diamond – Yellow Diamond. This was heartbreaking in particular when compared with the end of the episode, because Peridot claimed that Yellow Diamond is reasonable, rational, and an efficient decider – and tops in the universe at all three of those. 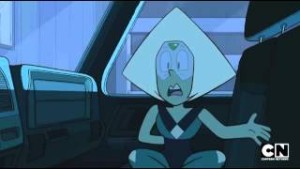 Yet again I wasn’t fond of my usually oh-so-honest little Steven getting the communication crystal from Peridot by tricking her and saying that Yellow Diamond was there…but then again, she did lie to him at first about what the crystal was (and how important it was). But I still kept my fingers crossed, because this is Steven Universe, dangit, and for me, it’s best when it’s at its happiest. Even when Peridot told him that all that mattered was that she and Earth were of use to Yellow Diamond, I couldn’t get behind the fact that she had simply forgotten all she’d learned in her weeks with the Crystal Gems.

All that said, Amethyst’s reaction to Peridot’s supposed betrayal was pretty amusing, especially when she was trying to think of a negative nickname (since “Peri” and “P-dot” were friendly ones). However, I didn’t care for her little diatribe about trying to get into Peridot’s head to make her do what they wanted her to. Steven’s response was, of course, perfect: “I don’t want to tell her what to do, she should just know…shouldn’t she?”

And Garnet’s response  to that was, in my opinion, just as perfect. (And too quotable to not include right now.) “It’s good you believe in everyone, Steven. Like your mother, you seem to have a little more patience than the rest of us. The truth is, not everyone deserves that patience.”

As if on cue, Peridot bursts out of the barn in her giant robot. It’s like it should have been an “evil maniacal villain moment” for her – but thankfully this show didn’t go with that trope. Instead it’s clear that Peridot was only trying to get a hold of the communicator crystal, and not actually trying to harm anyone (in this case, mainly Pearl and Amethyst). Essentially, she was feinting…though you don’t necessarily know that quite yet. (Like I said, I had my hopes.)

Of course poor Steven felt awful, because he’s Steven, but Garnet and Pearl’s reactions to his emotions were somewhat disappointing, with Garnet telling him there was “no time to feel horrible” and Pearl pointing out “you can feel horrible all you want back at the Temple”. Yet in a way they let their emotions rule them when they caught up with Peridot and got distracted attacking her robot – it was Steven who noticed that she was escaping and went after her. Yet even then, Peridot tells him that he’s letting “his emotions rule out reason” as she slips from his grasp and uses the crystal to contact Yellow Diamond.

At this point, I know that we were supposed to assume the worst about Peridot, but I still couldn’t do it. This show gives me so much hope, and I couldn’t bring myself to believe that Peridot was betraying the Crystal Gems – especially Steven, who’d shown her so much love and positivity. (This show, you guys. THIS SHOW.) 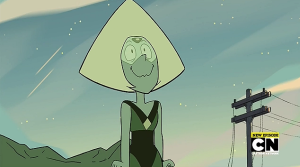 I have to break for a moment here to admit that while I *know* Yellow Diamond is a bad guy (at least for right now? maybe? ha ), she looks AMAZING. I loved her attitude, I loved her expressions, I loved her outfit. That said, when Peridot reported in and Yellow Diamond’s response was a cold question – “Which Peridot?” – my stomach actually clenched when Peridot named her specific facet and cut. Yes, we’ve known for a while now that most of the gems are “one of many”, but it was still jarring for me to hear and see them treated the way they were in “Message Received” and “The Answer”.

Thankfully, from then on Peridot truly proved what she’s about. Her Diamond wants to know why she’s behind schedule and why she’s not reporting from the ship, and although Peridot admits that the ship was destroyed, she lies about it, claiming it was an accident rather than telling Yellow Diamond that the Crystal Gems destroyed it. And then when Yellow Diamond is basically like “thanks for the report, glad Earth is going to be destroyed” Peridot stops her from “hanging up”, as it were. Because yay, she wasn’t just calling to give a report – she wanted to explain why they should terminate the Cluster that’s about to destroy Earth!

Yes, at this point there was still a chance that Yellow Diamond would convince Peridot to do her job, especially when she screams that she wants her Cluster and wants Earth to die. But because Steven Universe is awesome, Peridot understands that Earth’s ecosystem is worth more than destroying it all “for one geoweapon”, and she didn’t even hesitate to tell Yellow Diamond that NO, she won’t let Earth be destroyed!

Even with Peridot’s logical explanation and the fact that I honestly couldn’t believe that this show would have her betray Steven so badly, I was so, so happy to hear her refuse Yellow Diamond’s order. Of course, even when she tried to do her job and explain more, attempted to talk to Yellow Diamond about her reasoning, “her” Diamond merely called her a “puny Peridot” and yelled at her for disrespecting the direct Diamond line…before ordering her to leave Earth, and to leave the Cluster to grow. Again Peridot didn’t even hesitate to refuse, saying, “There are things on this planet worth protecting!”…and honestly Steven’s face when he heard her say that was at least as good as the declaration itself.

Poor Peridot didn’t stop there, though. She told Yellow Diamond that she knew more about Earth, and then called her a CLOD! Yellow Diamond’s face was pretty priceless when she heard that, but Peridot immediately hung up on her. The ensuing scene started off great, with the Crystal Gems running to congratulate Peridot, who was understandably in shock over what she’d done, but then there was that weird scene where Peridot dully announced that the communication crystal could be remote detonated. I liked this general idea, but it felt like a weird aside in an otherwise amazing episode. Oh it can be remote detonated – Pearl fumbles to give it to Amethyst – Steven puts a bubble around it – it’s thrown into the air and explodes far above them. No harm no foul, and I love that Steven was there with the assist, but to me it felt rushed, almost like it wasn’t given its due.

But hey, you know, now Peridot is officially a Crystal Gem, and that’s more than a little something.

To me this episode was basically a perfect conclusion to the story line that began with “It Could’ve Been Great”. I can only hope that tomorrow’s final Steven Bomb 4 installment will live up to everything that’s come before!