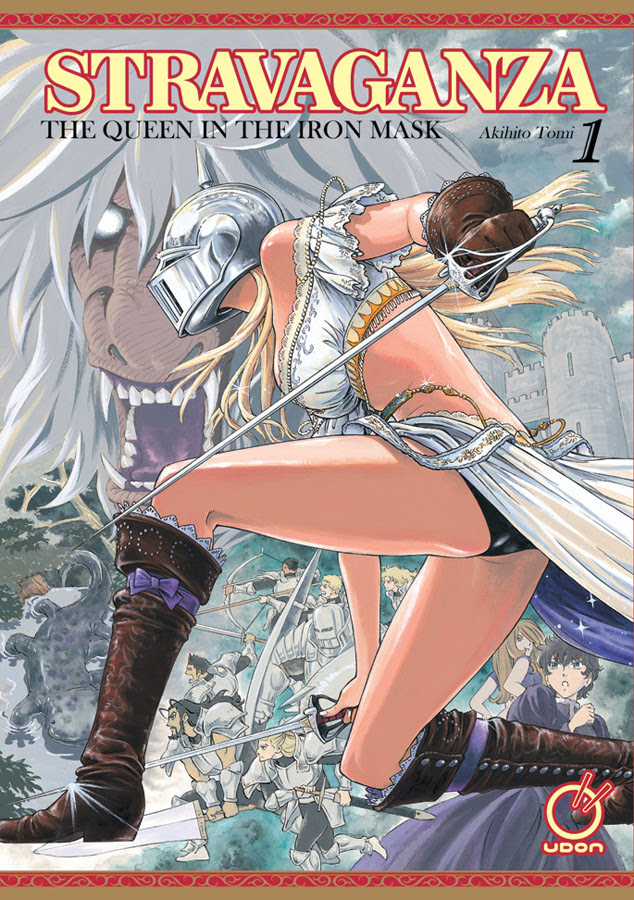 Stravaganza: The Queen in the Iron Mask was launched in 2012 in Enterbrain’s Fellows! magazine. It later moved to Enterbrain’s Harta! magazine. The series ended in 2017, with Kadokawa releasing the seventh volume last year. Tomi launched the spinoff mini-series Stravaganza: Isai no Hime in October 2017.

Here is the synopsis from UDON:

A mysterious warrior travels the kingdom of Auroria, battling monstrous creatures and seeking adventure. Few know this warrior’s true identity as the young and inexperienced masked monarch, Queen Vivian! STRAVAGANZA VOLUME 1 chronicles a world where humans are not at the top of the food chain, and the Queen in the Iron Mask must learn to use both her sword and her throne to protect her people from the dangers looming beyond the city walls.

UDON Entertainment will be releasing the English language version of Stravaganza in three oversized volumes, each one containing two of the Japanese volumes. The 368-page Volume 1 measures 5.75 x 8.25” and is full color (presumably the few pages that are in color, as the sample pages don’t seem to be in color at all) paperback. It will retail for $19.99 and goes on sale August 13, 2019. It is recommended for mature audiences only (there is nudity).

Are any of you fans of Stravaganza? What do you think?