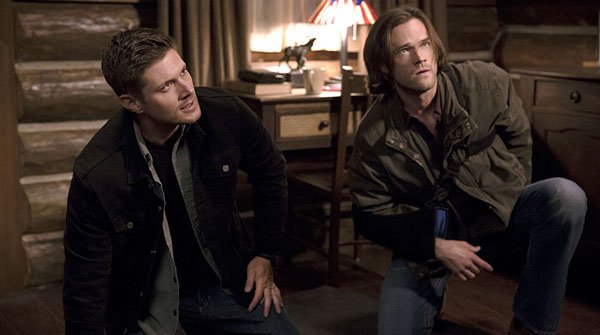 I said during last week’s review that if Sam and Dean were back to sipping beers by the Impala by this week I’d be disappointed. This is what happened immediately after the splash and I had to laugh that my phrasing was so spot on. Thankfully there was a bit more depth to the scene and the context was different than the usually Impala-beer-sipping scene, so I’m not as disappointed as I would have been. In fact, I think this was a pretty good follow-up for the seeming conclusion of the Demon Dean story (though it could come back since the mark is still there).  I’m usually not fans of Monster-of-the-Week episodes and prefer overarching plots, but this one managed to both be a self contained story and reflect on recent events all within a single episode. 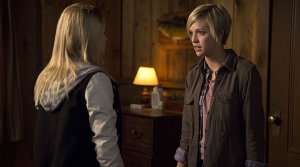 The parallels between the brotherly bond between Sam and Dean and the sisterly bond between Kate and Tasha was interesting to consider. They are both siblings who’d do anything for each other, even if it costs them their lives. The commentary that it wasn’t exactly the healthiest way to deal with things was poignant and seemed to make the Winchesters consider their own relationship. Kate eventually had to sacrifice Tasha when it became clear that there was no way around it. Sam didn’t make the same decision with Dean, but with Dean there was a viable cure. Would Sam have made the same decision if there was no cure for Dean? It’s an interesting question. I’m sure fandom opinion might be divided on that and I really don’t know where I stand. I wouldn’t want Dean to die and Sam to carry even more weight, but I’d also like to think the overall good would mean more than their sibling bond. Kate was able to make that distinction on her own.

I’m also really happy that Kate lived. So many people expected her to die in this episode because the show doesn’t exactly have a good track record with its recurring female characters. I’m not sure if two episodes is enough to add her to the incredibly short list of recurring female characters yet, but I’d very much like to do so. She’s been in the same number of episodes as Krissy Chambers, which I see cited frequently as one of the few recurring women on the show, so if Krissy counts, Kate should count, too. I think this is a moment to celebrate, though if they bring her back later on just to kill her I’m going to retroactively pop all the balloons at this little party.

This was also a great follow-up episode because it set the tone for how Sam and Dean’s relationship will be moving forward. Whenever Sam says that Dean was a demon, Dean quips with, “I hadn’t realized.” It’s a response that is entirely Dean. While I’m definitely in the camp that is going to miss Demon Dean, I’m grateful for the acknowledgement that it happened. Dean has trouble talking about it, but there was definitely much needed discussion about the issue in the best way Dean could manage. He’s not exactly the best with words to begin with so cracking jokes and having a brief minute long conversation with Sam about how he’s going to move forward was a very Dean way of handling it. So now the tone is set but will they just jump right back into being hunters without any conflict?  The mark is still there, after all. It’s not as though the entire situation has been swept under the rug.

Overall I’m surprised at how much I enjoyed this episode. I went in with pretty dire expectations, though, so I suppose it didn’t take much to exceed them. I was expecting hardly any acknowledgement of Demon Dean or the change in Sam and Dean’s relationship. I was expecting another woman to get brought back just to die. I was expecting the story to be entirely self contained with no bearing on the ongoing plot.I was wrong on all three counts. Sometimes I’m really happy when I’m wrong. This is one of those times.