Supernatural 9×23 Review: Do You Believe In Miracles? 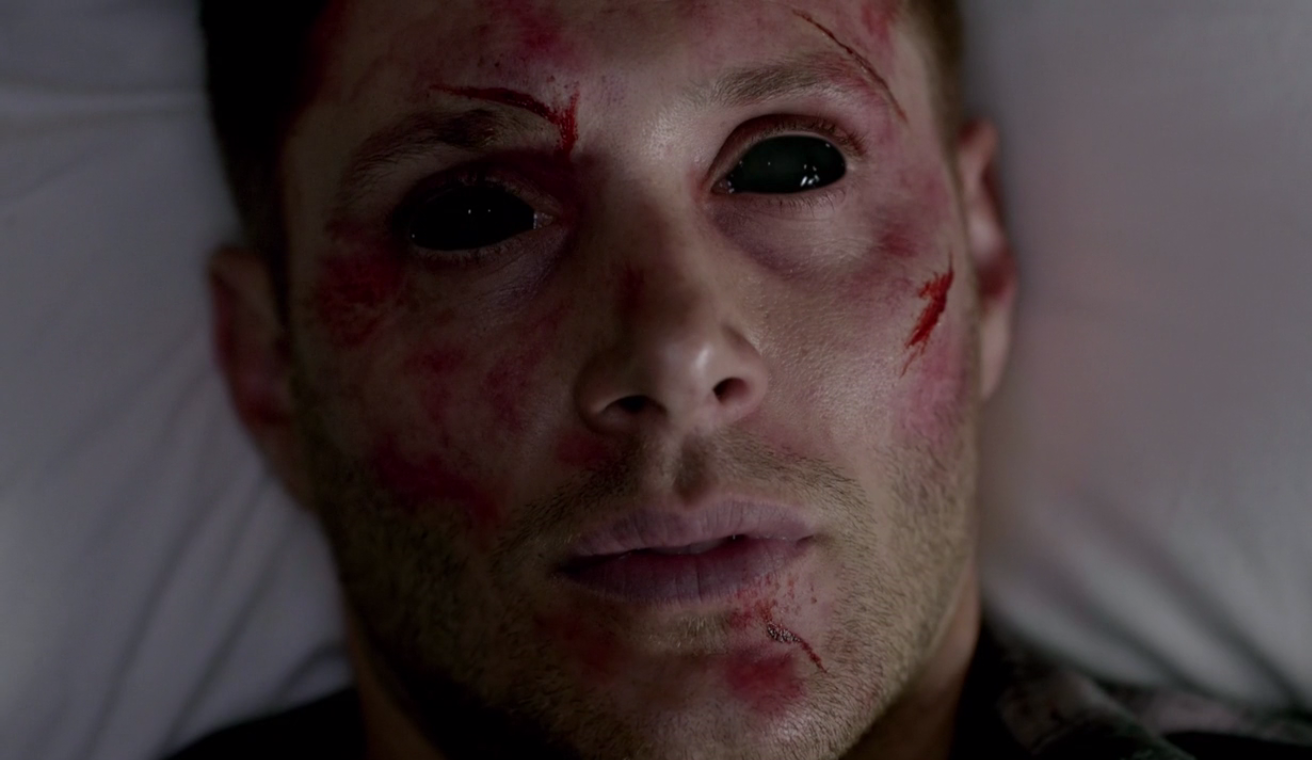 I admit that I put off writing this review for many hours just so I could immerse myself in the world of fanfiction and discussion for a while.  The finale wasn’t exactly surprising, but it was still powerful.  I was screaming in capslock for at least the last 20 minutes and the vast majority of my feed was reacting the same way.   All season finales of Supernatural are pretty dramatic, but this one left a lot of people screaming and flailing and completely unable to form a coherent sentence for at least an hour afterwards.  These reactions are completely and entirely justified.

Let’s cut right to the chase here.  Dean is a demon.  Most of us predicted this.  Jensen let it slip with his “eyes” comment in the press a few days ago and many meta writers have been speculating that that was the trajectory of the story for many weeks.  When Dean opened up his eyes to reveal that they’d turned black I literally screamed, even though I was fully prepared for it.  I couldn’t help but have a completely visceral reaction to the reveal.  It was very well delivered.  To be honest it’s hard for me to even critically analyze anything beyond that moment because it changes everything so completely.  Where do they go from here?  Is Dean now Crowley’s “prince of Hell?”  Does Dean have enough of himself left that he’ll still be loyal to Sam and Cas?  How long will Sam and Cas remain in the dark about Dean’s new state of being?  Will it be revealed right away?  Or will it be kept a secret?  Will this be solved within a few episodes or will this become the main story arc of next season?  Who? What? When? Where? How? Why?  So many questions and 145 days until the next season premieres.  How on earth will we survive?  Oh, woops, that’s another question.  I apologize. 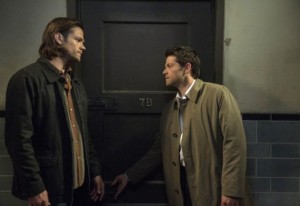 Alas, there was a lot of other stuff that happened in this episode beyond that.  For me, a huge plus was the continued development of the relationship between Sam and Castiel.   They are united by their love of Dean and no matter what happens next season, that bond between them is going to drive them forward together.  They both place Dean’s well-being as a high priority and have already shown a massive amount of concern over what’s happening to him.  Whether it’s revealed that he’s a demon right away or not, they will most likely be working together to help him.  Of course, in order for them to team up Castiel needs to fully escape from Heaven first.  Thankfully that seems likely thanks to Hannah.  Which brings me to my next intense moment of fangirl glee…

Thank you for not killing Hannah or making her an antagonist.  Thank you, dear writers, for keeping a strong female character on the side of the protagonists and not killing her to further their angst.  Thank you for adding a +1 in the woman column after taking both Abaddon and Tessa away from us during the last two episodes.  Can we keep her?  Please?  After the last episode I thought we’d truly lost her for good to Metatron.  When Gadreel made a move to become a suicide bomber, I had another moment of panic that we were about to lose her again, this time to permanent death.  This season has ended with neither of those scenarios being the case an I hope that the writers have heard our pleas for more female energy on the show and decide to keep her around.  Thank you, writers.  Thank you so much.

We also got a resolution to the conflict between the brothers that has been ongoing through the entire season.  I’m not completely sure how I feel about how that resolution came about with Dean being near death, but I’m glad that they were at least able to get there.  The impact of it may be overshadowed by Dean’s new demonic nature, though, so their relationship next season is going to start off very different than it would under ‘normal’ circumstances.  The word ‘normal’ with the Winchesters is sort of a loose term, I know, but even with the extremely bizarre circumstances of their lives, Dean being a demon is certainly a rather big difference.  Overall I’m pleased that it was resolved, though I can’t quite say I’m pleased with the rushed way it was done.  We’ll have to see how things play out next season before I can consider those series of events satisfactory.

There is one major thing that I disliked, though.  Gadreel dying was a punch to the gut.  Death happens on this show a lot, so it’s not exactly like it’s a surprise when people die, but I’m a huge fan of the actor Tahmoh Penikett from his work on both Battlestar Galactica and Dollhouse.  He’s one of those actors that’s just a delight to have on my TV, so saying goodbye to him once more causes me great pain.  Maybe someday him, Balthazar, and Gabriel will return in a blaze of glory and right all the wrongs of the world, but for now it’s another angel that I’ve grown attached to that kicked the bucket.  At least his death was an act of self redemption and sacrifice, not murder.  That’s about the only part of losing him that softens the blow.  It doesn’t soften it by much, but it helps.

We now head into over four months of hiatus with a list of questions longer than the average size of Crowley’s contracts.  The writers have returned this week to start the beginning of season ten, but we have absolutely zero clues as to how we’re going to jump back into things.  Will there be a time jump?  Will we start off right away?  Who will know what?  And when?  All we know is that Metatron is still an antagonist even if he’s being put in a cell, Dean is a demon, and Cas needs to escape from Heaven.  Beyond that everything is just one giant, bold, underlined, italicized question mark.  Hopefully by the time Comic Con comes around in July the writers will have enough of the season complete for us to pick their brains about it.  I’m personally very excited to see where they take this arc.  Bring on season 10!