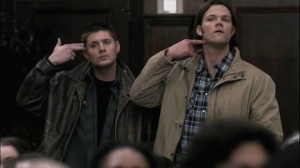 We finally have some news about the proposed Supernatural spin-off. Unfortunately there will not be a female lead but, according to TVLine, producers are looking to cast an African-American actor as Ennis Roth the “de-facto star” of the supposedly ensemble cast. If The CW actually follows through, a POC lead might be enough to make what appears to be a rather boring bunch of characters watchable. So let’s look at what TVLine told us about the key players of Supernatural: Tribes.

While I wasn’t sure what to expect in a Supernatural spin-off, I have to say I’m not exactly enticed by what we have seen so far.  The list of characters provided by TVLine includes:

Ennis Roth is “likable, strong-willed, resolute, with a strong sense of justice”, a tragic death to mark his heroic origins and probably daddy issues.

David Hayden is a shape-shifter from some kind of supernatural mob family but lives as a human so clearly has a bunch of self-hatred.

Margo Hayden is David’s sister, “professional, strong-willed, determined” and ambitious. She’s the new head of her family in the wake of a tragedy.

Violent Durant is a werewolf and part of another supernatural mob family. She’s in a Romeo & Juliet romance with David.

Freddie Costa is “a world weary cop in his 30s”. He knew Ennis’s dad and he has a secret.

So basically, a dude with a daddy-inspired hero complex is thrust into the supernatural world after a tragic loss. He meets another issue-fueled dude who happens to be a shapeshifter who is in love with a werewolf he is supposed to hate. There’s also a dangerously ambitious woman, an irrationally protective brother and an older male mentor with a secret.

I’m certainly not falling of my seat in anticipation because this story doesn’t seem offer anything particularly new.

That said, if Ennis does end up being a POC that could add a little something to this otherwise bland premise. But it’s still disappointing that in a cast with six key characters there are only two women, one of which is doomed to a Romeo & Juliet romance (because that always works out so well).

To be honest, I wasn’t particularly interested in this spin-off before and I am even less now. We will just have to wait and see if the backdoor pilot will be enough to convert me. Heads up though, if the person close to Ennis that is murdered is a woman, I will not be watching this show.