Cartoon Network Bringing Back Teen Titans For A Season 6? Teen Titans Go! To The Movies Will Decide? 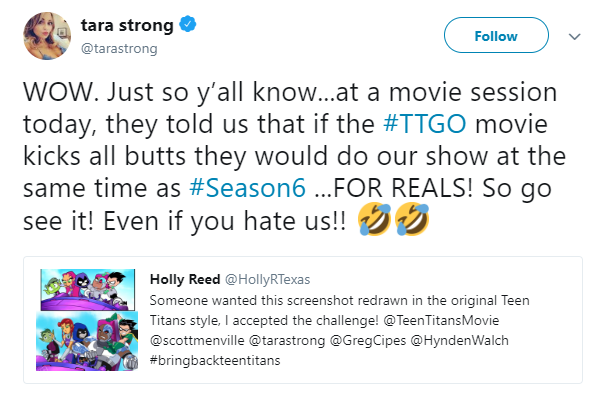 While fans of Teen Titans Go! have a feature-length animated film to look forward to, turns out Cartoon Network might be planning to give the world a Teen Titans season 6, too. However, there is one condition. The revival of the old animated series depends on the performance of the upcoming film. Uh! Booyah?

A single tweet from Tara Strong, who voiced Raven in the original Teen Titans series and continues to do so in Teen Titans Go!, got the fandom excited. Turns out Cartoon Network seems to be thinking of giving fans a Teen Titans season 6.

The series was canceled by the network back in 2006. It debuted in 2003 and ran for five seasons. The characters came back in Teen Titans Go!, which took a far more comedic approach to the team of heroes. Of course, TTGO! divided fans, with many of them still hoping for the original series to be brought back.

If Tara’s words are true, we might just get to see the revival if Teen Titans Go! To The Movies does well. Greg Cipes, the voice of Beast Boy (Teen Titans, Teen Titans Go!), also tweeted about the possibility. I don’t know if TTG!TTM is going to make that much money at the box office. The 2017 release of My Little Pony: The Movie was only able to make $60.3 million at the box office even though it has a huge fandom.

Some fans feel this is a cheap marketing ploy to get them to watch TTG!TTM, which will premiere on July 27, 2018. Certain fans still refuse to watch TTG! because they think the network has ruined a beloved animated series to target young children with mindless comedy.

Michael Jelenic, producer of TTG! also sounded hopeful about the original series returning when asked about it during WonderCon earlier this year.

As for me, I am a fan of both shows and if Cartoon Network does decide to give us a Teen Titans season 6, it would mean an increase in the content I enjoy!

I hope Cartoon Network appreciates the continuing fan enthusiasm for the revival of the original series and decides to bring it back. It can even be part of the upcoming DC streaming service. Putting Teen Titans season 6 on the subscription service is sure to make a lot of people interested.

Previous:Shadowhunters Canceled? Say It Ain’t So!