“Justice League Dark: Apokolips War” Gets Home Release This May! 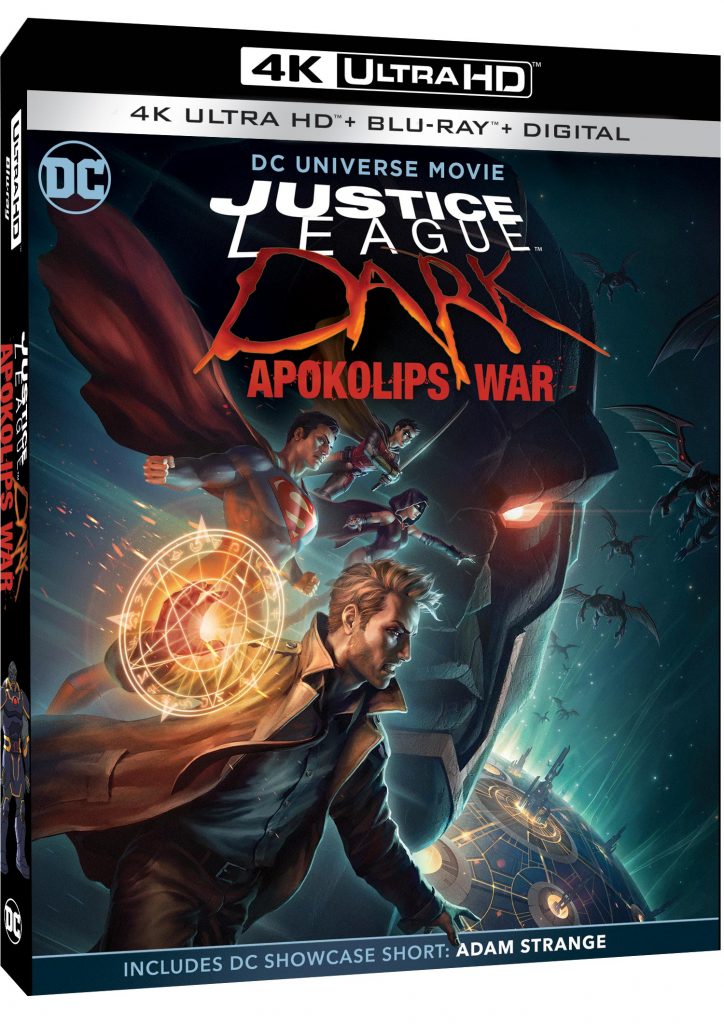 Get ready for a major DC Comics animated event releasing this May with Justice League Dark: Apokolips War. The upcoming Warner Bros. Animation and DC production will be available on Digital come May 5, 2020. You can buy it on 4K UHD Combo Pack and Blu-ray Combo Pack on May 19, 2020.

Courtesy of Warner Bros. Home Entertainment, Justice League Dark: Apokolips War will be accompanied by the all-new DC Showcase animated short, Adam Strange. The short has been described as “The thrilling tale, which offers insight into the space adventurer’s fascinating backstory, features Charlie Weber (How To Get Away with Murder) as the voice of title character.”

Culminating a six-year animated journey that began with the release of Justice League War in 2014, Justice League Dark: Apokolips War finds Earth decimated after intergalactic tyrant Darkseid has devastated the Justice League in a poorly executed war by the DC Super Heroes. Now the remaining bastions of good – the Justice League, Teen Titans, Suicide Squad and assorted others – must regroup, strategize and take the war to Darkseid in order to save the planet and its surviving inhabitants. This is truly the war to end all wars, and only the victor will live to enjoy the spoils.

Justice League Dark: Apokolips War features the largest Super Hero cast in the history of DC Universe Movies with dozens of actors/characters spotlighted in a grand ensemble of talent reprising their roles from this six-year story continuum. Matt Ryan (Legends of Tomorrow, Constantine), Jerry O’Connell (Carter, Bravo’s Play by Play, Stand by Me) and Taissa Farmiga (The Nun, The Mule, American Horror Story) anchor the cast as Constantine, Superman and Raven, respectively – the triumvirate determined to assemble the forces necessary to lead humanity’s final attack. Alongside that trio are the long-running core of Justice League voices — Jason O’Mara (The Man in the High Castle, Agents of S.H.I.E.L.D.) as Batman, Rosario Dawson (Briar Patch, Daredevil, Sin City) as Wonder Woman, Shemar Moore (S.W.A.T., Criminal Minds) as Cyborg and Christopher Gorham (Covert Affairs, Insatiable, Ugly Betty) as The Flash – as well as JL-adjacents Rebecca Romijn (X-Men, The Librarians) and Rainn Wilson (The Office, The Meg) as the voices of Lois Lane and Lex Luthor, respectively.

This really is a major DC Comics animated event and I am so here for it!

Amy McKenna (The Death of Superman) is the producer, and Jim Krieg (Batman: Gotham by Gaslight) is the co-producer. Executive Producers are Sam Register and James Tucker (Reign of the Supermen, Justice League Dark).

From what I could tell from the trailer, while I’m excited Raven (one of my favorite comic book characters) is in this movie, I wouldn’t be surprised if she will spend most of her time staying knocked out and only waking up to perform or help with the final attack. It’s just how certain OP characters are treated in team-led stories.

“Justice League Dark: Apokolips War is an epic story of supernatural proportions. A blockbuster, battle royale of a film filled with intense action and heartfelt emotions, serving up spotlight moments for our cast of unique characters,” said Mary Ellen Thomas, Warner Bros. Home Entertainment Senior Vice President, Originals, Animation and Family Marketing. “This incredible thrill-ride takes us to the edge of the DC universe and sets the stage for an exciting new chapter.”

The approximate running time is 90 minutes. The film has been rated R for bloody violence, language, and some sexual references.

Will you be picking up a copy of Justice League Dark: Apokolips War?