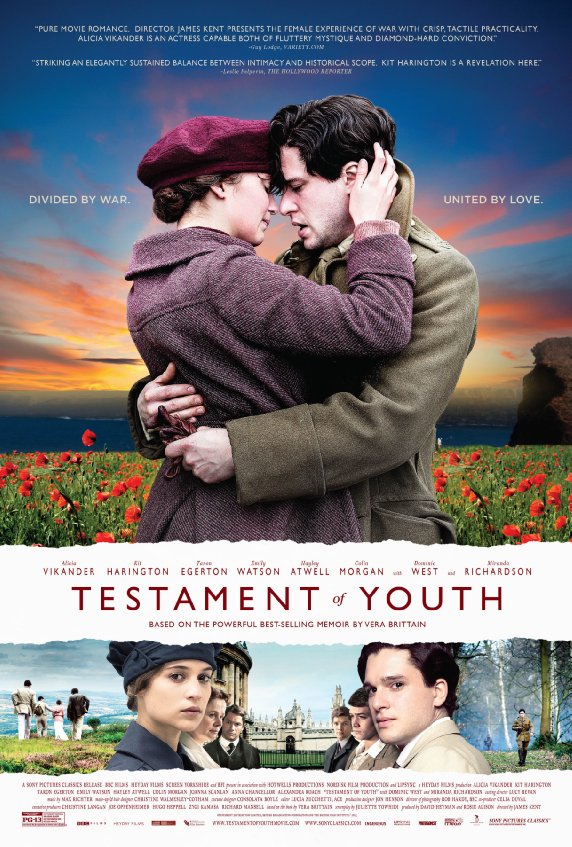 I cried so hard at Testament of Youth that I still had a headache the next day. I cry a lot – I am no longer allowed to watch The Land Before Time because of this (a rule that my mother legitimately still enforces despite my being 33 and living in another state) – so that shouldn’t be any great surprise. Still, a film centered around World War I is hardly going to be a happy story, and this one is definitely not. It’s actually depressing as hell. But don’t let that deter you from seeing a well-acted and extremely poignant portrait of the generation who had the misfortune to come of age during the Great War.

Testament of Youth is based off the memoir of the same name by Vera Brittain, a noted English feminist and pacifist, and focuses on the relationships between her, her brother, her fiancé, and her best friend. It also deals with Vera’s somewhat “unorthodox” (for the times) drives – such as wanting to attend Oxford and become a wartime nurse. Indeed, Vera’s memoirs are considered a classic of feminist literature for its portrayal of a woman’s struggle to become independent in a society where women weren’t even allowed to obtain degrees.

Vera must fight her conservative parents in order to even sit for the entrance exams, then she must face the skepticism from the instructors who don’t believe her to be dedicated to education and see her as a debutante. Once enrolled, the same instructor who initially wrote her off urges her not to throw away her studies to become a nurse, but with all the prominent men in her life enlisted, Vera feels that she can do no less.

Vera Brittain’s memoirs are heralded as one of the best representations of World War I. The story is touching and absolutely hits you in every single feel. At a time when going off to war was still a very romanticized notion (Testament of Youth was published in 1933), a book detailing the harsh reality was probably incredibly eye-opening. My generation (clouded by American privilege, of course) has never really seen war – not the all-encompassing global event that the World Wars were. Still, we have already become jaded about war. We know that there is very little romance in it. However, that does not diminish the impact of Testament of Youth. It’s only by confronting the past, by being shown what life was like, that we can ever hope to prevent a repeat of the atrocities of World War I. 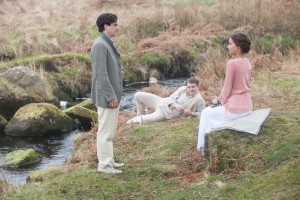 Testament of Youth is brilliantly cast. Alicia Vikander was incredible as Vera. Her raw emotions were tangible, her facial expressions impeccable. Kit Harington is almost unrecognizable as Vera’s (clean-shaven) fiancé, Roland. For someone whose default expression seems to be pouty and brooding, Kit does an excellent job of portraying Roland’s youthful idealism and exuberance. Taron Egerton completely blew me away as Edward, Vera’s brother. The film very much understates his possible homosexuality (as Vera seems to have not known and it has only been hinted in historical documents), but Taron exuded a quiet sort of presence in every scene. Colin Morgan, as Vera’s best friend Victor, does pining with aplomb. I will watch anything Colin does, even if he makes me cry. (Which happens a lot.) The camaraderie between the core group is fantastic, which makes for a very gripping and emotional film-going experience.

As the film focuses primarily on Vera’s wartime experience (and the necessary developments beforehand, such as her and Roland’s relationship), it doesn’t delve too much into her activism, which started after the end of the war. It is introduced at the end to tie up the story and deal with Vera’s lingering feelings over the war. But I felt that the film still framed Vera’s feminism well. Her determination to get into Oxford and prove that everyone was wrong about her, and then her passion to become a nurse and fight the same kind of dismissal she had faced at school.

Testament of Youth is a beautifully-shot, wonderfully-acted gut-wrenching film. There are moments of levity, but I guarantee that it will take your heart and rip it out of your chest pretty much repeatedly. You simply will not care. I highly recommend that everyone see this movie if you have the means to do so.

Testament of Youth is out in limited release in the United States on June 5. (Click here for a list of international release dates!)

Previous:Lois Lane Deals with the Fallout of Being Too Awesome
Next: FEELINGS Daily: Tumblr Has a Gif For That