Boruto: Naruto Next Generations 1×121 Review: The Entrusted Mission – Protect the One Tails 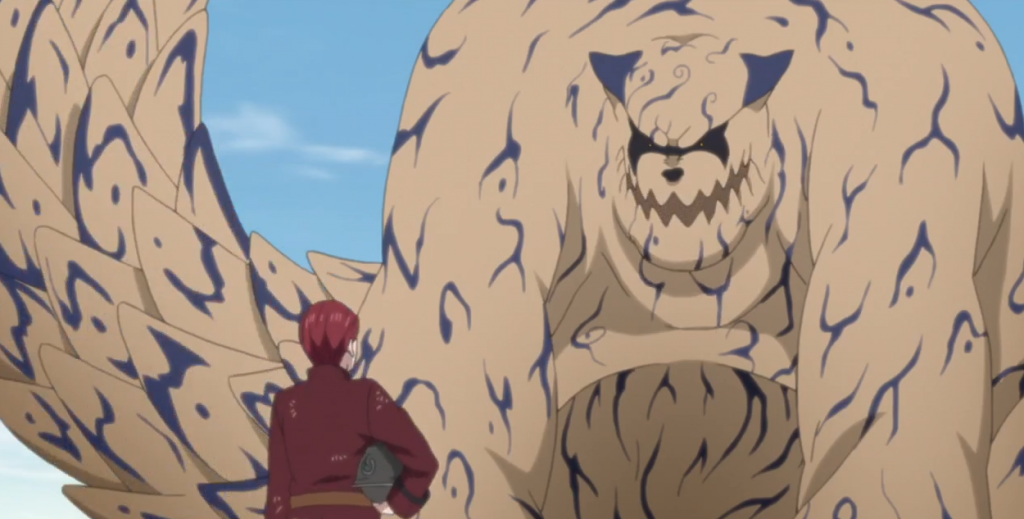 Gaara and Shukaku in ‘The Entrusted Mission: Protect the One Tails’ (Image: Screengrab)

The latest Boruto anime episode, titled ‘The Entrusted Mission: Protect the One Tails,’ was all about having Boruto interact with Shinki while trying to complete a dangerous mission.

After Boruto messed up Sasuke’s tactics in the previous episode, it was Gaara’s turn to keep the young ninja out of harm’s way while fighting Urashiki. I don’t know about you, but the current arc seems to have thrown away quite a lot of Boruto’s previous character development to make the current story work (by force).

I’m still unable to understand what made Boruto decide to lie to everyone and run away from the village to meet up with Sasuke. From the experiences he has had over the previous (more than 100) episodes, Boruto should have learned something by now. His plan to get Sasuke to offer him a training lesson was poorly thought out. How’s the powerful Uchiha going to teach Boruto anything when he doesn’t have any time to spare right now?

As far as my opinion goes, the current arc would’ve have worked better if Boruto were going with Shikadai to meet Gaara but missed the train. I would have liked our little hero to stumble upon Sasuke and Gaara’s fight with Urashiki instead of actively searching for Sasuke.

With all of that out of the way, ‘The Entrusted Mission: Protect the One Tails,’ brought Shukaku into the mix. Even though Gaara was able to seal Urashiki, his sealing jutsu wasn’t permanent. This is what led to Gaara asking Shinki, Boruto, and Kankuro to take Shukaku to the Leaf Village.

I enjoyed the bickering between Boruto and Shinki. Both have something to teach each other. Shinki (Gaara’s adoptive son) needs to loosen up while Boruto needs to be a bit more mature. Shukaku ended up bringing an unexpected sense of humor to the episode.

The battle sequences were scarce but quite enjoyable.

Let’s see what happens next!

Previous:The Time Has Come for a Percy Jackson Reboot (And It Should Be Heroes of Olympus)
Next: “Crown of Coral and Pearl” Review: Beautifully Written But Needs to Slow Down