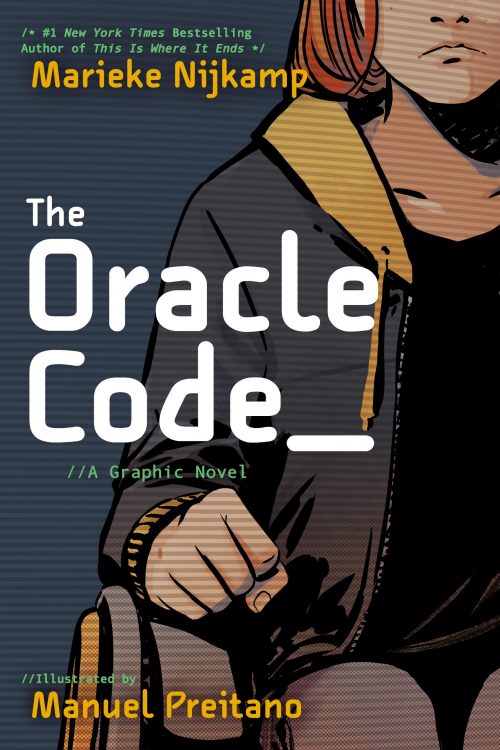 The Oracle Code isn’t just for old fans of Barbara Gordon, but for people who are completely unfamiliar with the character as well. If you like stories about overcoming hardships, ghost stories, computer hacking, and mysteries, then The Oracle Code is the book for you!

I was provided with a free eARC copy of The Oracle Code through Netgalley.

I have been a Batman fan for as long as I can remember, so I am familiar with Barbara Gordon as both Batgirl and Oracle. What is so great about The Oracle Code is that while there are some shout-outs and references throughout for people who are longtime fans of the character, you can also read and enjoy without knowing anything about Barbara Gordon. It is a self-contained story outside of the main canon. And don’t let the Young Adult label throw you; the story is enjoyable and relatable for adults, too. 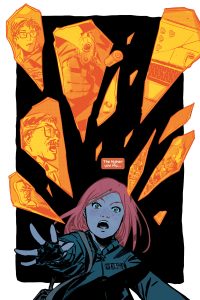 The graphic novel begins with Barbara working on solving puzzles through computer hacking with her friend Benjamin. They hear police sirens and Barbara becomes worried about her father, Commissioner Gordon. She tries to follow, but unfortunately, she gets shot and is severely injured. As a result, Barbara is now in a wheelchair.

Barbara’s father takes her to the Arkham Center for Independence to help her process what had happened to her and help her adjust to her new wheelchair. Sheis understandably angry, for a number of reasons.

Barbara spends her days working with the therapists at the facility and becoming friendly with a few of the other children living there. One girl, Jena, befriends her after hearing her have a nightmare. Jena continues to visit Barbara’s room at night, sharing scary stories with her while talking about her life and the tragedy that befell on her and her brother.

Things start getting dodgy when Barbara finds out that Jena’s brother was not at the facility as she had stated. Then, Jena herself disappears. The doctor told Barbara that funding had run out for Jena, so she had left the facility. Barbara, however, was not convinced and began investigating the mystery of what happened to all of the children who had “left” Arkham Center for Independence.

Barbara didn’t truly believe that the children had graduated, moved on, or left due to lack of funding. She just knew something else was happening to these children. While Barbara investigates Jena’s disappearance, she faces some personal trials and setbacks along the way. But Barbara doesn’t give up. She refuses to do so. Barbara is determined to use her hacking skills to solve this puzzle. 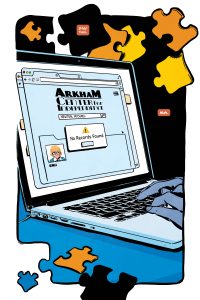 Author Marieke Nijkamp writes Barbara as a very real character who people can relate to. She struggles to deal with the changes in her life, but she is strong and she is persistent. Nijkamp, according to their Twitter account, based Barbara’s and the other children’s experiences on Nijkamp’s own experience in a medical rehabilitation facility where they learned to live with disability.

Nijkamp described their experience as, “…living in a world where disability is – for once – the norm.” This book was written especially for teens with similar experiences to that of Nijkamp, to let them know that they are seen and not alone. They can be heroes, too. It’s a wonderful message that shines through every page of The Oracle Code.

The art done by Manuel Preitano, with colors by Jordie Bellaire and Preitano, complements the story well. The illustrations help the reader perceive what Barbara is feeling by using brighter colors for what is most important while less important things and people are more understated. The more people Barbara lets into her life and connects with, the more colors are added to the page. They no longer fade into the background.

This is something that I’ve noticed with other DC young adult novels that I have read. The art is colored in such a way to put emphasis on the characters over the background. These stories, The Oracle Code included, are character-driven and this coloring style helps to portray that.

As I mentioned previously, I have always been a Batman fan and that includes the family and extended family of the Bat as well. So, I was very excited when I had heard that DC was publishing a young adult graphic novel starring Barbara Gordon, and I’m happy to say that it did not disappoint. 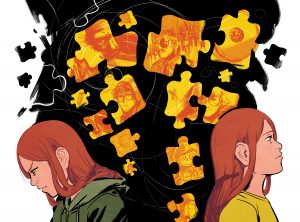 The book was interesting, engaging, and just plain fun to read. It also didn’t shy away from the trials people may face when adjusting to living life with a disability. The way Barbara handled the changes in her life came across as very authentic. You could feel and understand her struggles as well as her building confidence as time went on.

I highly recommend The Oracle Code to anyone who is a fan of Barbara Gordon or who is interested in her character but doesn’t know where to start. Since this story is self-contained, it is easy to follow for someone who is completely new to comics. This highly enjoyable graphic novel about a courageous girl who won’t give up is perfect for teens and adults alike.

The Oracle Code is available in book stores and your local comic book shop today.