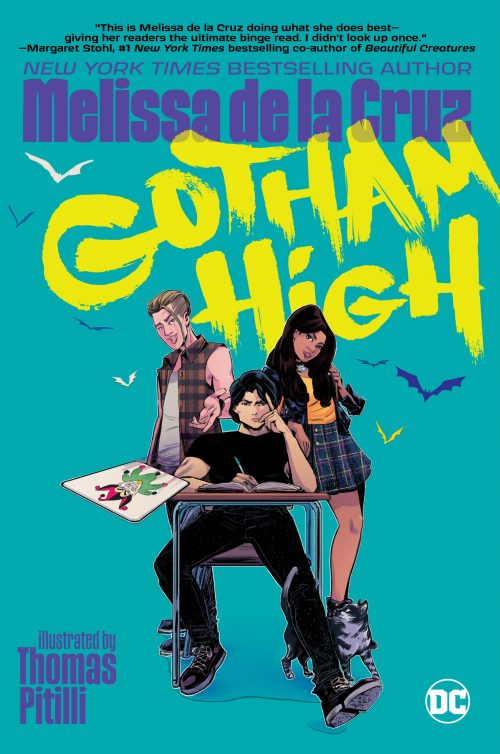 Gotham High is a Young Adult graphic novel that provides a new twist on some classic Batman characters. It focuses on Bruce Wayne, Selina Kyle, and Jack Napier as 17-year-olds caught up in first love, love-triangles, friendship, angst, and teenage drama.

I was provided with an eARC of Gotham High from DC Entertainment. All opinions are my own.

I must admit, when I first read the description for Gotham High, I had no interest in the book. Having graduated from high school myself in 2003, I’m nowhere near the age demographic this book is intended for. Though I often enjoy reading Young Adult novels in general, this particular title did not catch my interest.

However, the day the trailer was released on social media, it caused quite an uproar. It ranged from comic book fans being incredulous and annoyed, to outright mad. Some even said that the character of Batman was ruined. (This is categorically untrue. This is not a canonical story and was written with the intention of bringing new young readers into DC Comics).

The rebel in me, seeing this much discord and controversy, definitely had to read this book now. And actually, it was pretty darned decent and I was thoroughly entertained. Not at all bad for teen angst and drama!

The graphic novel starts out with Bruce Wayne, a Chinese-American rich kid who gets kicked out of his boarding school for fighting. He was defending Richard Grayson (character shout out!) from bullies and would not have gotten kicked out if it hadn’t been for a video of the fight going viral. Because of the incident, Bruce returned to Gotham and transferred to Gotham High School, “Home of the Bats.” (No, really!)

When Bruce arrives back in Gotham, he runs into his old friend Selina Garcia Kyle. He rekindles his friendship with her and also makes friends with the class clown, Jack Napier (the future Joker). Bruce gets invited to parties with high stakes card games, as rich kids do.

It doesn’t take long for things to go down hill for our trio. Harvey Dent is accidentally kidnapped instead of Bruce for a ransom. Bruce was injected with some kind of blow dart and was passed out at the time. This leads Bruce on an investigation to try to figure out why these things are happening, who is doing them, and what they want from Bruce specifically.

What follows is your typical teenage movie. You know, what movies think happen in high schools, but high school is always so much more boring than that. There’s some legitimate angst (particularly with Selina’s bed-bound father), a lot of drama, and of course, a love triangle. Selina appears to like both Bruce and Jack and wonders why she just can’t have both.

There are some hits and misses along the way with the trio’s friendship and romances. But ultimately, Bruce’s main focus is to figure out the mystery he is involved in and to help out Selina and her father in any way that he can. That unfortunately is a lot easier said than done.

I actually quite enjoyed Gotham High, definitely a heck of a lot more than I thought I would. I may have originally read it to be a rebel when I saw so many people complaining, but I was quite entertained and found it hard to put down. I read the graphic novel in two days. Normally with my schedule, that’s not something I often do.

I loved the beautiful art by Thomas Pitilli, with the colors done by Miquel Muerto. The colors were not understated like some of the other DC Ink imprints I have read such as The Oracle Code, Harley Quinn: Breaking Glass, and Teen Titans: Raven. They are as vibrant as the story itself and fit with what the author was trying to portray.

You can tell that author Melissa de la Cruz was writing what was familiar to her, as she is part Chinese herself. You could also tell that she had a lot of fun writing Bruce Wayne. She put her own spin on other well-beloved and popular characters such as Alfred, Barbara Gordon, Ivy, and Harvey Dent. Cruz created a story that was interesting and engaging.

Her take on these characters may have been new and different, but that made it kind of fun. The only complaint that I have is that as most of the characters appear different than what I’m used to, it made it a little hard to recognize some of them upon sight. So, at times it felt a little more confusing than you would expect, but it did not take away from the story.

Overall, I think Gotham High is a fun and different look at some popular Batman characters and is definitely worth the read; especially for young adult readers. I don’t think it was worth nearly all of the controversy that it sparked, but in a way, I guess I can be grateful for that because it inspired me to read a book I would not have read otherwise.

Gotham High is available from DC, local (where curbside/shipping is available) and online indie bookstores, and your local library through Libby, Overdrive, and Hoopla apps today!