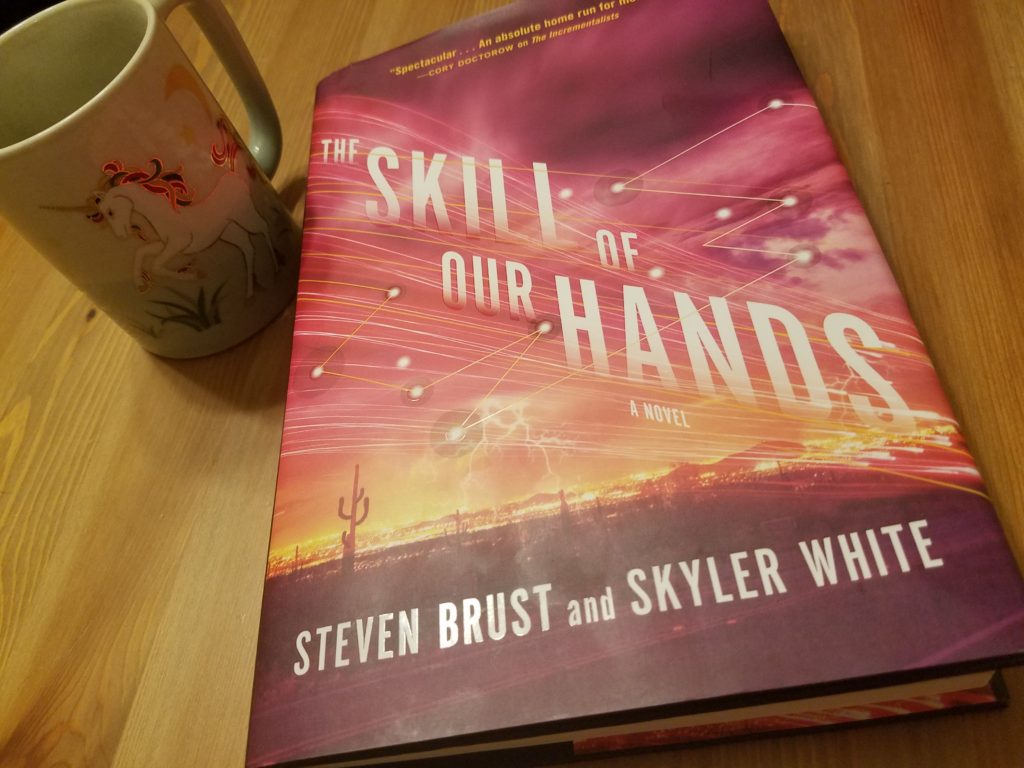 Sometimes a book comes along that hits right at the heart of a social issue, one you can imagine the cool teacher in high school assigning thirty years from now to show how people thought in 2017. That’s exactly how I felt reading The Skill of Our Hands,  Steven Brust and Skyler White’s second joint novel which goes on sale today.

Let me emphasize one part: this would only be assigned by the cool teacher. Anyone without an open mind would probably burst a blood vessel at the idea of letting teenagers read The Skill of Our Hands. It has violence (not too graphic), plenty of F-bombs, references to sex, criticism of the government, talk of revolution – you know, pretty much everything that makes overprotective parents yell “not in our library” while demanding a school board meeting.

The Skill of Our Hands does for the immigration crisis what Cory Doctorow’s Little Brother X did for government surveillance and overreaction to terrorism. The suffering of undocumented immigrants is made real through the eyes of characters who are trying their hardest to improve the situation. I’m not going to spoil the story for you – honestly, go read this book – but if you like Doctorow, you’ll probably like this, too.

The Incrementalists have the ability to access anything that’s ever been written down. They use this information to meddle in touchy situations, trying to nudge society towards a freer, brighter future. How? By putting the right word in the right person’s ear to change how they behave.

The Incrementalists are basically immortal. When one is killed, only their body dies. The rest of them becomes a “stub” in their garden until the others can find a Second, a person willing to let them spike the dead member’s consciousness into their body. Usually the Incrementalist’s personality overwrites the host, but sometimes the newcomer survives with the knowledge from the Incrementalist’s past lives.

The group spends their lives – all of them, one after another – finding problem areas of the world and doing what they can to smooth them out. They call it “meddling” and there’s a lot of discussion about how to do it ethically. I thought that was a nice touch; it would have been ridiculous if all two hundred Incrementalists agreed all the time. They do function well as a group though. Every member was screened for a desire to help, and there are almost never renegades.

This book is near the head of the pack as far as representation. The Incrementalists are a decent mix of sexes, orientations, and ethnicities. There are many more bisexuals/pansexuals than straight or gay people, which makes sense for a group of body swappers. It doesn’t seem to phase members when they end up in a Second of a different sex, though the group does consider whether any surviving partners have preferences about that. Ramon, who has a lovely new female Second that the others hadn’t yet seen, is still referred to as “he” by preference which no one argues. There’s also a great part where one Incrementalist is upset by another having chosen stereotypically strong, attractive, masculine Seconds in the past because the emphasis is supposed to be on the Second’s character and health. The casual background diversity was one of the most refreshing parts of the book.

Fair warning, the story gets complicated. It’s told by different Incrementalists with little asides from Oskar, one of the unofficial leaders. Normally the authors make it clear who is doing what, but a couple of times I had to go back a page to figure out what everyone was doing. This happened towards the end of the book, and it didn’t ruin anything for me. It’s just something to watch out for.

Bottom line: The Skill of Our Hands is solid choice for people who like socially conscious, character-driven stories with heart and those who don’t mind a complicated plot as long as there’s a good payoff.

*Note: I received an advance copy of The Skill of Our Hands for this review. The Incrementalists I bought on my own after reading the sequel.*

Previous:Supergirl 2×09 Review: “Supergirl Lives”
Next: Gotham 3×13 Review: Smile Like You Mean It