Thor: The Dark World got a lot of things right and just as many things wrong. Through my almost hysterical giddiness, I saw pacing issues, a two-dimensional villain and a disappointing lack of adventure. Was it unbearable? By no means. 2011’s Thor was a jumbled hot mess, but I enjoyed it regardless. And for all of its faults, I’d say this is a sequel with fantastic characterization, lots of humor, and really good insight into the dynamics of the Asgardian royal family.  My overall verdict is that Thor: The Dark World is a solid and enjoyable film.

Of its highlights, The Dark World excelled most in its characterizations. Thor’s (Chris Hemsworth) development from bloodthirsty warrior into easy going nice guy has been consistent throughout Thor and The Avengers, but here we really see how mellowed out he’s become. While Thor was incredibly reactionary and easily aggravated into fights in Thor, he shows a more pragmatic, mature thought process in the face of war. Jane (Natalie Portman) was as delightful as she was in Thor. I’ve always liked her absent-minded scientist persona, and her reactions to the things happening around her in The Dark World were just as amusing. Jane always says and does the things I feel like I’d say or do were I in her position, and Natalie Portman really brings a realness to the character. 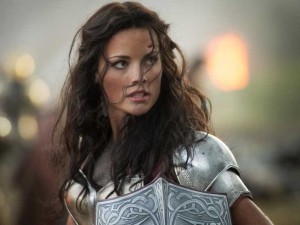 Speaking of ladies, The Dark World boasted three additional important female characters and they all completely rocked the screen time they were allotted. Sif (Jaimie Alexander) had the least amount of screen time, but every moment of it was a testament to her sense of honor and duty to Asgard even when silently dealing with her unrequited attraction to Thor. It would have been easy to frame Sif and Jane as love rivals, but doing so would have been out of character for Sif, who places friendship and loyalty over her own feelings. On Earth, Darcy (Kat Dennings) got to show off her sidekick chops by being the leader of Jane’s posse in her absence. While Darcy was mostly comic relief in Thor, here she shows that she’s actually knowledgeable, and her loyalty to Jane is kind of a parallel to Sif’s loyalty to Thor. Special mention goes to Frigga (Rene Russo), whose character was heavily fleshed out from her previous appearance. The Dark World’s Frigga didn’t make it through the entire film, but it hardly felt like a fridging. We got to see Frigga be a merciful and loving mother, a selfless Queen of Asgard and a skillful warrior. Did her death motivate her husband and sons into action? Yes. But Frigga died as a warrior and had a warrior’s funeral. And considering that she spent most of Thor in the background, her role in this film was a touching and impressive surprise.

While I would have loved to see more of Fandral (Zachary Levi), Volstagg (Ray Stevenson) and especially Hogun (Tadanobu Asano), I’m glad that Heimdall (Idris Elba) got more screen time. In the comics, Heimdall is a very important ally to Thor (as well as the brother of Sif) and it was good to see him actually get in on the action. 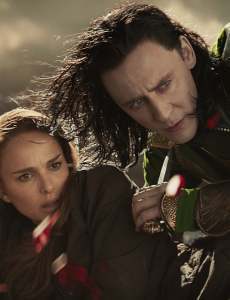 Unsurprisingly, the standout character was Loki (Tom Hiddleston). While all the actors and actresses perform their roles splendidly, Tom Hiddleston really seems to get Loki, which shows in his portrayal. Here, defeated and utterly heartbroken at the death of his mother, Loki spends most of the film making cynical quips and having some much needed brother-bonding time with Thor. He even gets in several heroic moments before his redemptive “death”, only to reveal that he’s been playing a movie-long ploy in order to usurp Odin (Anthony Hopkins) and obtain the throne once more. But the intrigue of Hiddleston’s Loki is which of his actions and reactions are sincere and which are fake. It’s incredibly hard to tell, and I think that’s part of what keeps us wanting more from him. Alas, Loki is officially taking a vacation from the Marvel Cinematic Universe. I think it’s for the best. He’s undoubtedly been the most well characterized Marvel villain to date, but we wouldn’t want them to use him as a crutch.

Despite the strong characterizations of the others, The Dark World faltered with Malekith (Christopher Eccleston). Eccleston managed to hint at some depth, especially in Malekith’s sincere relationship with Algrim (Adewale Akinnuoye-Agbaje), but the poorly paced script didn’t allow for a lot of focus on the Dark Elves. And while the Dark Elf mooks were fondly reminiscent of Doctor Who villains, they didn’t provide much more than cannon fodder.

My main gripe about The Dark World was that, despite its rampant CGI, the film felt rather small. I was expecting a grand adventure through Svartalfheim, but that particular portion of the film didn’t last very long. While I appreciated the grandiose Game of Thrones-esque design (courtesy of GoT-veteran, director Alan Taylor), ultimately it just wasn’t big enough. And while Thor was overly-long and jumbled in its exposition, The Dark World felt rushed. Blockbuster movies run so often past the two hour mark nowadays that I was poised to sit for at least an extra half hour of film. Maybe an extra half hour would have done The Dark World some good.

Nevertheless, I really had a good time watching The Dark World. The humor was sharp and witty, with an inspired cameo from Chris Evans that was easily the best part of the film. The expanded view of Asgard was a visual feast and provided some excellent world building, and the mid-credits stinger connected the film and its happenings to Guardians of the Galaxy.  Ultimately, it’s a good entry into the canon of the Marvel Cinematic Universe.

Next up in Phase 2 of the MCU is Captain America: The Winter Soldier. Look for our review when it hits theaters April 4th, 2014.