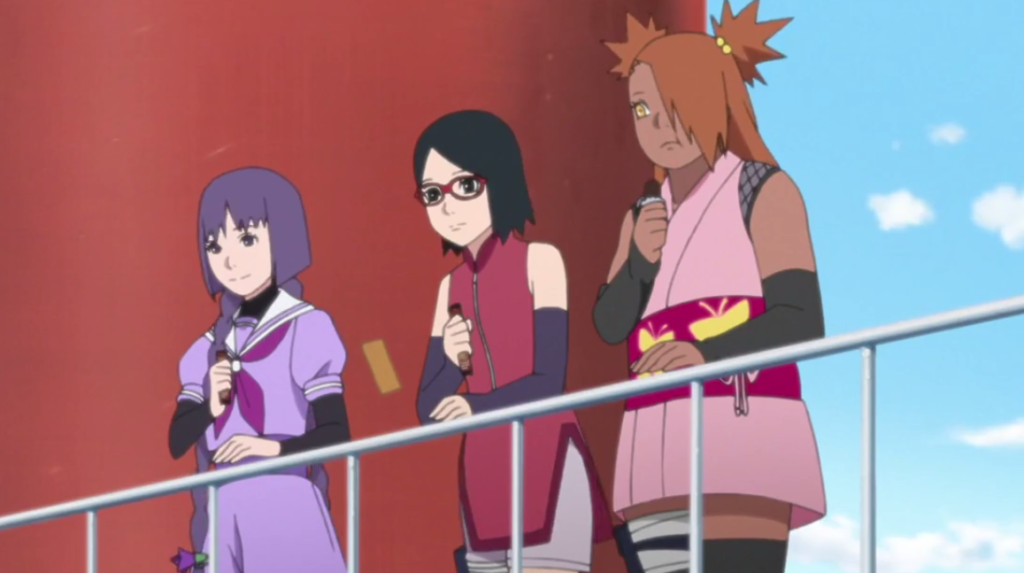 This week’s episode of Boruto, titled ‘A Turbulent School Trip!!,’ began a new arc for the main characters. I don’t know if it’ll be as enjoyable as the Gaiden arc but I’m looking forward to knowing more about the current politics in the ninja world.

I’m still waiting for Boruto to come across as a different character than Naruto. ‘A Turbulent School Trip!!’ went on to show that as suspected, Boruto is a version of Naruto if he had been born in less troublesome times. Making Boruto a prankster just like his father has done no favors to his character. I want Boruto to have a unique personality, which he currently doesn’t have.

A lot of things have changed in the ninja world. The Fourth Shinobi World War was years ago and while there are still issues to be addressed, it’s good to see villages trying to strengthen bonds between each other. ‘A Turbulent School Trip!!’ showed Naruto and Iruka deciding to take Boruto’s class on a field trip to the Hidden Mist Village. But knowing that this is an action-heavy series, you know things are going to go wrong. It’s just a matter of when they do.

I liked Salad’s decision to make Boruto the class leader during the trip so that he won’t mess things up. I’m enjoying seeing the two become better friends. Also, it’s obvious Mitsuki ships them. Personally, I ship Boruto with Mitsuki and Salad with Chocho because it makes more sense.

There’s a fun dynamic between Boruto and his friends (including Denki, Iwabe, Shikadi, and Inojin), however, I would like the writers to flesh out the rest of the students, too. I want to know more about the girl who carries around a stuffed animal toy.

Currently, the only character that doesn’t make sense to me is Sumire. It’s tough to believe that she has gone back to her shy self.

She was determined to destroy the entire village recently. The writers should’ve shown her trying to win back the trust of her classmates instead of making it look as if they’re gently asking the audience to forget what she was up to during the first main arc of the series.

Right now, it’s obvious that something is not right in the technologically advanced ninja village. Iwabe has already warned his classmates about not trusting all the spectacular buildings. According to him, it’s all a front for hiding something darker.

A character named Kagura came across as someone who’ll be a major player in the current arc. He’s also a trusted aide to the Mizukage and serves as a guide to Boruto’s class. I wouldn’t be surprised if he’s revealed to be a traitor. We also got introduced to two thugs named Hassaku and Shizuma. I don’t know if Shizuma mentioned Boruto’s “nine eyes” to sound creepy or if he knows something about Boruto’s hidden powers.

‘A Turbulent School Trip!!’ was all about setting things up for future events. I don’t know for how many episodes this arc will continue but I won’t complain as long as it’s enjoyable. It’s also getting a novel.

I liked how Boruto’s first field trip was to Hidden Mist Village which was also home to Naruto’s first major villain.

Did you watch Boruto this week? What did you think of ‘A Turbulent School Trip!!’? Let us know.