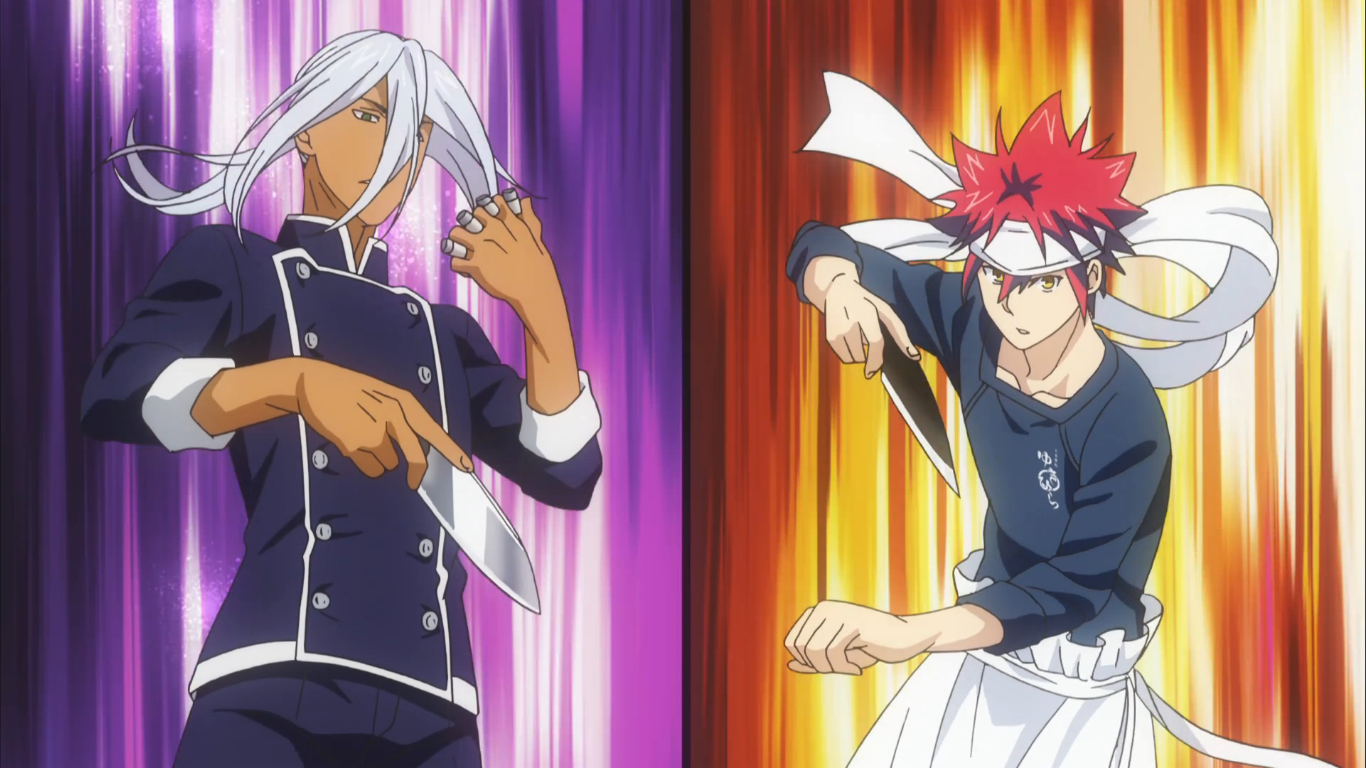 In “The Umami Tightrope”, we finally get to Yukihira’s battle with Hayama. We also learn just exactly how Hayama ended up on the Elite Ten, working for Central in the first place.

“The Umami Tightrope” reveals the slightly tragic and totally predictable backstory for how Hayama ended up on the Elite Ten. Basically, it’s as many people suspected; Azami strong-armed the Shiomi Research Center’s corporate sponsors to back out, then offered Hayama his own facility and said that Jun could work in it. In other words, Azami is a jerk who doesn’t understand basic economics and completely devalues any cuisine he doesn’t understand. I 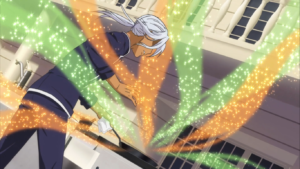 mean, if you shut down legitimate research facilities in your academy, staff members can just go somewhere that will appreciate their work. And for crying out loud, scientists study curry still because it’s believed to have properties to help fight cancer. But sure, let’s shut it down because only I know what “gourmet” is. Man, I hate Azami.

Also, what the hell, Hayama and Jun. Have you ever heard of a flash drive? The cloud? Is your research backed up nowhere else?

But Yukihira also realizes what I pointed out in an earlier episode: Hayama seems totally dead inside. Yes, he “saved” Jun’s research and is now backed with all of the considerable financial weight of Azami, but he seems to have completely lost the joy in his cooking. You can tell in his battle with Yukihira; he’s completely emotionless, just sort of matter-of-factly explaining things and taking it as a given that he’s going to win. Well, Yukihira’s not cool with that, because he wants to fight Hayama at his best and defeat him fair and square, otherwise there’s no point to the victory. 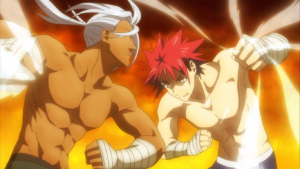 If you’d never seen Shokugeki no Soma and just tuned in for “The Umami Tightrope”, you would be forgiven for not realizing this is supposed to be a cooking anime. I’m not sure where they came up with the metaphor of boxing on a tightrope (over a canyon, for crying out loud), but it sounds dangerous as all get out, and not quite in the same league as potentially making a dish that smells. Still, I can’t help but appreciate the visual of Hayama and Yukihira duking it out. Thanks for that. 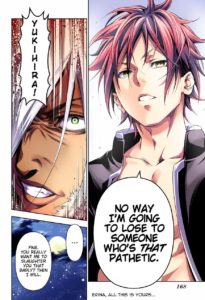 Speaking of fan service, this episode has it in spades. I’m pretty sure the twins are underage, and so their “sexy” bear outfits are a little off-putting, to say the least. But at least we got another scene of Dojima in the bath to make up for it. We also got a nice sequence of mostly-shirtless Yukihira running through the…hotel?…looking for Hayama. In the manga, he finds him right away, so I enjoyed his overly-dramatic entrances into, like, every room. However, I am immensely disappointed that the anime just couldn’t live up to the badass depiction of Yukihira from the manga, in the scene where he calls Hayama pathetic for not fighting back. I mean… I guess there was no way to improve on that.

There were still a lot of panning shots in “The Umami Tightrope” (a lot, a lot, oh jeez), but for whatever reason, they weren’t as noticeable to me as they were last week. I still could do without them, and I think the animation can stand on its own and doesn’t need them. So I’m not sure why this animation team seems so obsessed with them.

The pacing is still pretty fast, but for the first time, I actually liked that. Shokugeki no Soma is a cooking anime, so the focus is of course on the cooking, but I was a fan of how they did it in this episode. No drawn-out explanations of what they were doing; for the first time, a cooking battle actually seemed like a battle, fast-paced and with high stakes. With seven episodes left in the season, and no idea as to how far into the manga they intend to go, I wonder how much of this next stage of the Advancement Exam we’ll get to see. Yukihira and Hayama’s battle will surely conclude next week, and Erina isn’t facing the same challenge the other rebels are, but we will get to see snippets of the others’ battles against the Elite Ten?

Have you seen “The Umami Tightrope”? What did you think? 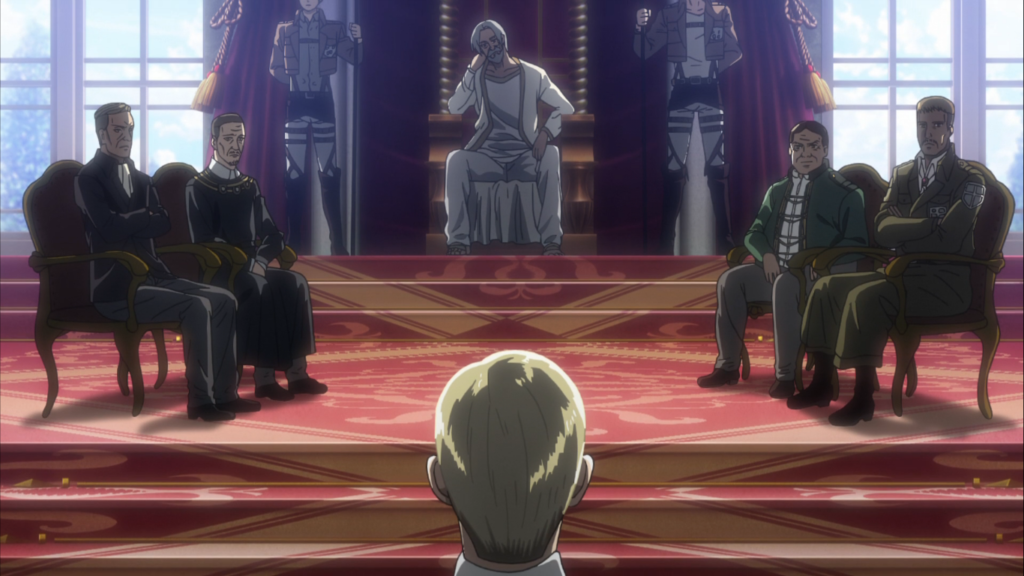 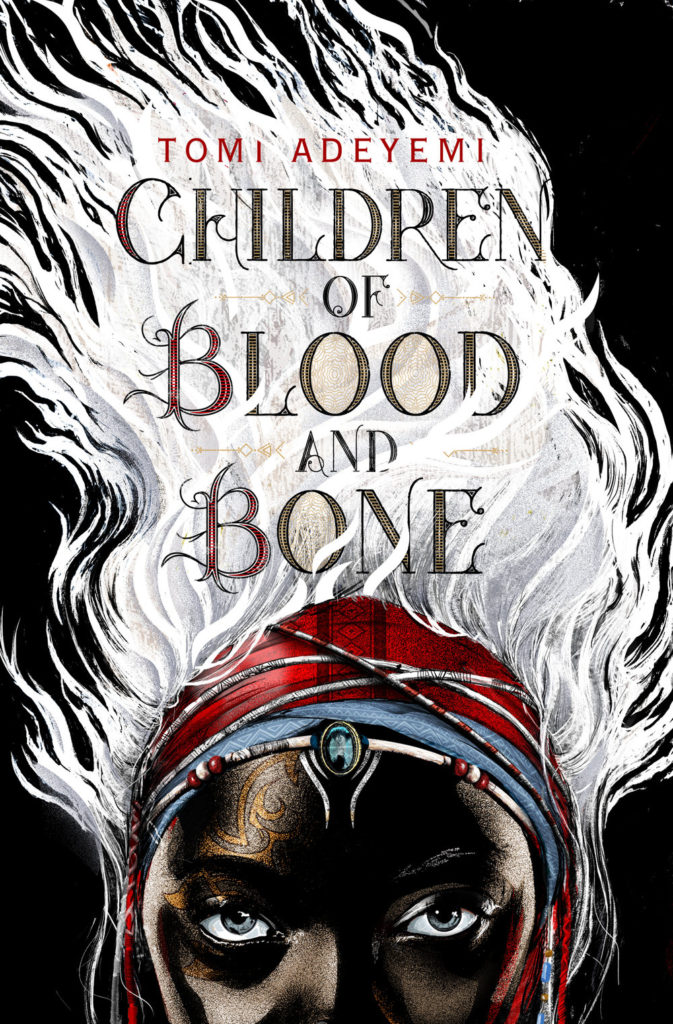