The WB will have much for lucky fans on July 26th, Saturday night at the great San Diego Comic Con. Here, anxious attendees will be treated to the world premiere for the new Gotham series, an exclusive pilot screening for The Flash, exclusive footage of the upcoming Constantine series and Arrow: Season Three. Cast, producers and creative folk involved with each show will be on stage for some interactive fun, and likely more exclusive info.

“Gotham World Premiere: For the first time ever, DC Comics fans will enter the dangerous and compelling world of Gotham with a screening of the pilot episode, followed by an appearance by the cast and producers.

The Flash Pilot Screening: Following a full-length screening of The Flash pilot, cast and producers will stop running long enough to take the stage.

Constantine Exclusive Footage: The enigmatic John Constantine makes his television debut at Comic-Con with footage from the upcoming series, and fans will be treated to a visit from the cast and creative team. 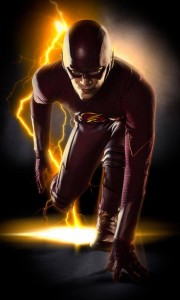 I am foremost hyped for the Flash screenings, as I am a huge fan of the Scarlet Speedster and his Rogues Gallery. So far, the costume and story set-up appear perfect and close to the source material. The time for the Flash is due, and a perfect addition for the WB’s long-standing success with the DC Universe on the small screen. My fingers are crossed that this premiere will exceed expectations, and leave us all gasping for air.

Gotham, is the series I do not think we initially begged for. Yet, the past trailers and promo posters have showed some promise. I love Batman, but feeling a bit of a burn-out from constant exposure to reboots and retellings of his origins. Yes, James Gordon (pre-Commissioner) is the focus, with much of the Arkham Asylum crew in tow. But, I feel with the show’s possible success, a question will constantly asked by fans..when do we finally see that all-important Bat-cape and cowl?

Constantine, I feel will be a welcome addition not as a comics character but for supernatural horror fans in need of something fresh and exciting. Hopefully with good writing, our Hellblazer will be remembered outside comics for this series success and not the Keanu Reeves-starred motion failure.

Arrow Season 3, which I have not followed, is also exciting. Honestly, I never caught on yet for fear of a cancelation. I never thought his character could work on the small screen, yet here we are. Fans and newcomers eventually gave this a chance, and the show continues on strong with its own fandom.

What are your thoughts and expectations on the future of this WBTV/DC small-screen line-up? Comment below!