WARNING: This article contains spoilers through The Whisperer War, Volume 27 (issues 157-162) of The Walking Dead comics.

I didn’t enjoy The Whisperer War quite as much as the last volume, but a big part of that is because the current story line is as maddening as it is interesting.

Reading The Walking Dead volumes is both a blessing and a curse. The wait between new installments is long, but it’s great to get what is usually a more well-rounded story than a single issue can provide. Of course it’s all in what you prefer, and I obviously prefer the volumes – something that The Whisperer War showed me yet again.

First of all, the Negan plot continues to intrigue me, especially now that he’s no longer locked up in the cell. Because yup, he brought Alpha’s head to Rick, he fought alongside Dwight and the others against the Whisperers, and we learned something about Lucille. It probably shouldn’t be super surprising that she was named after an actual person, someone who Negan clearly cared about (whether in a healthy way or in a ‘Negan’ way is yet to be revealed), but this situation was handled very well in The Whisperer War. Regardless, the loss of Lucille (and subsequent burial) was actually kind of…dare I say it…moving. 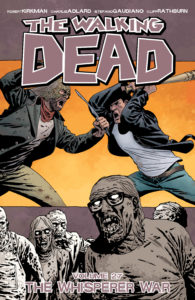 Another character who really stood out to me this time around was Eugene. While I still can’t imagine that his radio conversations with “Stephanie” are going to end well, his insistence on making extra bullets and then delivering them to Alexandria in the midst of the fighting were pretty hardcore, and the little speech he gave, combined with Rick’s insistence that Eugene is more than just the bullets he makes, were probably the high point of this volume.

Meanwhile, if it wasn’t already obvious, the golden age of Alexandria and the other nearby settlements is clearly at an end. The Whisperer War has already caused more damage than even the war with Negan did; the Saviors are plotting against Rick and friends, Hilltop has been burned to the ground, and there’s still a thousands-strong herd of walkers on its way to cause more trouble for our heroes.

While the death toll in The Whisperer War wasn’t very high (at least in terms of ‘lead’ characters), I was sad to lose Gabriel, although I’m honestly more attached to his character on the show than I ever was in the comics, so you know, don’t mind me. As for the almost-deaths, I’ll be honest: I was more worried about Negan’s close call than Carl’s…so between that and everything that happened with Lucille, perhaps my loyalties are truly shifting…

Nah, who am I kidding. I’m always going to love Andrea most of all, even if she didn’t show up much in The Whisperer War.

What do you think about the Whisperer plot so far? Have we really seen the last of Beta? How do you think he survived Negan and Lucille? And speaking of Negan…have you always been a fan, or are you only recently coming around to him, like me? Let us know in the comments!