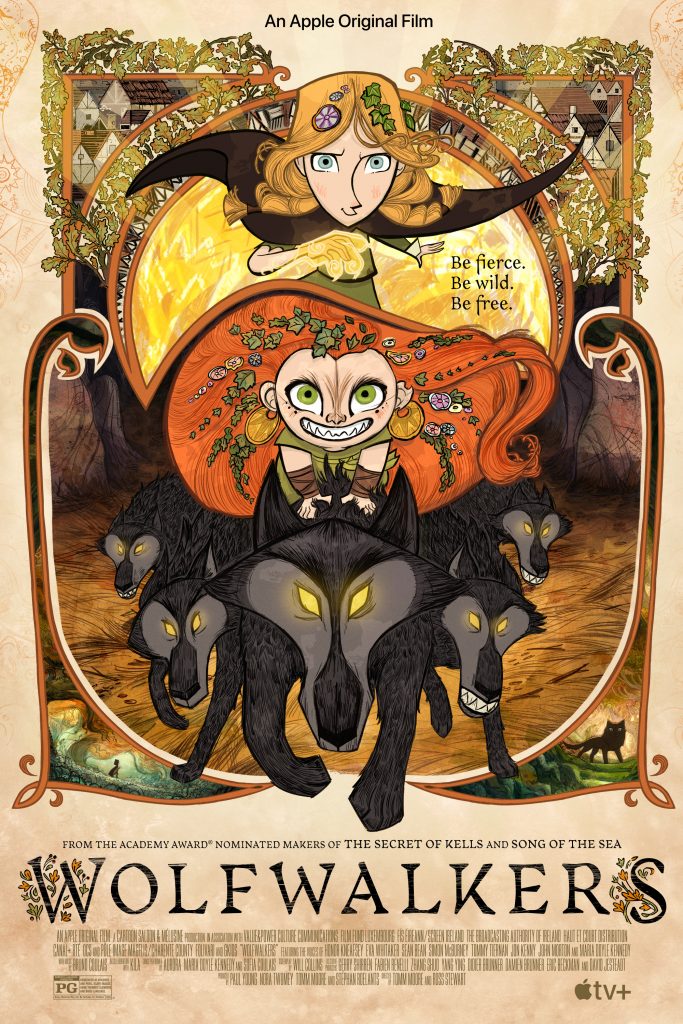 For fans of The Secret of Kells and Song of the Sea comes Wolfwalkers, the first original animated film from Apple TV+. Set in the late 1600s in Ireland, a young English girl learns about friendship, bravery, and sacrifice in this beautifully animated, aesthetically pleasing Celtic fairy tale.

Wolfwalkers is the story of Robyn Goodfellowe (Honor Kneafsey), a young apprentice hunter who moves with her father (Sean Bean) from England to Kilkenny, Ireland, where her father is tasked by the Lord Protector (Simon McBurney) with wiping out the last wolf pack. As the villagers leave the safety of the walls of their city and try to clear the forest for farmland, the wolves attack them. When Robyn follows her father into the woods, she meets a wild girl named Mebh (Eva Whittaker) who belongs to a tribe of humans who turn into wolves when they sleep.

This is a fairy tale for the ages. Robyn, mourning her mother and chafing under the rules and restrictions of her new life in Ireland, wants to hunt wolves with her father in the forest. When we first meet her, she is practicing her crossbow skills. But then she meets Mebh, realizes what the wolves are really like, and uncovers a secret in the town that changes her view on the circumstances.

But it isn’t just a fable about not judging by appearances. The Lord Protector is an authoritarian of the highest order, and even Robyn’s father is terrified of disobeying his orders, but he comes to this town and ignores the villagers’ warnings about disturbing the mystical forest. His religious fervor incites a mob mentality throughout the town and culminates in a troop of soldiers marching to burn down the forest.

Robyn spends the entire film fighting against the idea that she has to do as she’s told, because she’s learned that what the townspeople are doing is wrong, and she is willing to fight to save Mebh and the wolves.

With a PG rating, you know that it isn’t going to be too dark, but it is still 1600s Ireland, and there are some unsettling moments where you become concerned for a few of the characters. Right at the beginning, Robyn is attacked by wolves and accidentally shoots her pet falcon, Merlin, and my heart stopped. (Merlin ends up being fine, thanks to Mebh’s healing powers, but still.)

Every moment of this film was breathtaking. It utilizes the same hand-drawn 2-D animation styles as both The Secret of Kells and Song of the Sea, co-director Tomm Moore’s previous films with Cartoon Saloon. The art relies on vibrant watercolors and textured woodcuts. I was particularly charmed by the scenes featuring “wolf senses”, where scents are emphasized by various colors against a grayish background. It’s like a kind of synesthesia that enhances the film’s endearing magical quality.

The score is also gorgeous, traditional Celtic music that manages to meld seamlessly with a few tracks from the Norweigian singer-songwriter AURORA, including a special version of her song “Running with the Wolves” made specifically for the film.

I loved every second of and everything about Wolfwalkers. This film is gorgeous and enchanting and haunting and fabulous. I cannot recommend it enough.

Wolfwalkers will, thanks to GKIDS, have a limited run in North American theaters this weekend (November 13-15) before launching globally on Apple TV+ on December 11.

*I was provided with a free screener of Wolfwalkers in exchange for an honest review. All opinions are my own.*

1 thought on “Run with the Wolves in “Wolfwalkers” – Movie Review”