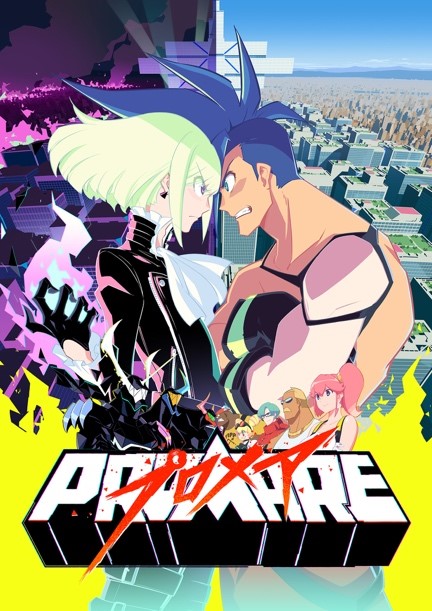 Courtesy of Fathom Events and GKIDS, Promare, the first full-length film from anime production company Studio TRIGGER, will be hitting select US theaters in a special two-night event next month.

Studio TRIGGER, the acclaimed Japanese animation studio behind the hit series KILL la KILL and Little Witch Academia, was founded in 2011 by former Gainax employees Hiroyuki Imaishi and Masahiko Ōtsuka. Imaishi directs Promare, the studio’s debut feature-length film, which uses a “bold cel-shaded visual style”, and is considered to be the “spiritual successor” to many of his former works. It is described as a “blistering action-adventure story”.

Tatsuru Tatemono, Hiromi Wakabayashi, and Shigeto Koyama from Studio TRIGGER stopped in at a couple of US anime conventions last year to do some promotion, including Anime Expo and AnimeNYC. The film was released in Japan on May 24 and ranked at number 8 its opening weekend. It has made over 1 billion JPY.

Here is the synopsis for the film:

Thirty years has passed since the appearance of Burnish, a race of flame-wielding mutant beings, who destroyed half of the world with fire. When a new group of aggressive mutants calling themselves “Mad Burnish” appears, the epic battle between Galo Thymos, a new member of the anti-Burnish rescue team “Burning Rescue,” and Lio Fotia, the leader of “Mad Burnish” begins.

This explosive animated feature will be shown both in Japanese with English subtitles as well as with an all-new English voice cast. The dubbed version will be shown September 17, the subbed on September 19, both at 7pm local time. Additionally, fans who attend either screening will be treated to exclusive footage featuring the Studio TRIGGER creative team.