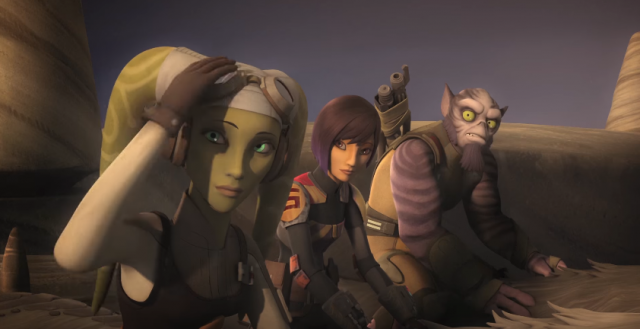 This week’s Star Wars Rebels installments – “Wolves and a Door” and “World Between Worlds” – felt more like one long episode than two separate ones, and boy, did Big Things happen!

Unfortunately, with those Big Things come a lot of questions – enough to make me unsure as to how I feel about “Wolves and a Door” and “World Between Worlds”. For instance, while I definitely understand the concern over what the Empire was doing at the Jedi temple on Lothal, these episodes kind of made it look like that one-shot Minister Hyden character would have been able to figure out the painting and the portal without Sabine and Ezra. And if that isn’t the case – if he really was a lot closer to figuring it out on his own than it seemed – then well, that just speaks of sub-par writing. (Although the callback to The Ones from the Clone Wars show was nice, at least.) 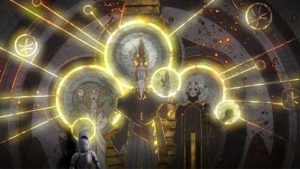 Don’t get me wrong, that issue in and of itself didn’t do much to curb my enjoyment of these episodes, but I believe it’s worth noting because it did throw me off a bit…but not as much as the end result of Sabine and Ezra’s foray into the temple. Because guess what – time travel is now canon in the Star Wars universe!

I’ve seen some other articles expressing excitement over this, but me? I’m side-eying it big time. Do I hate it? Not really, not yet. After all, its existence is apparently how Ahsoka survived her fight with Vader back in season two. 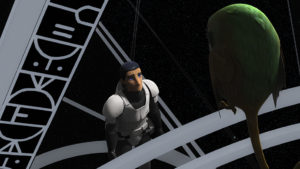 That’s right, once Ezra figured out how to open the gateway, Morai the convor was there to encourage him to save Ahsoka. Which was, by the way, amazing…as long as I ignore the time travel implications. I suppose I should be grateful that there do appear to be limitations to how it can be used; Ahsoka stopped Ezra from saving Kanan by explaining that doing so would mean Ezra himself – and all of his friends that were with him in that moment – would die. She also apparently couldn’t go back to Lothal with him, though unless I missed something, there was no specific explanation given for why she couldn’t do so. I’m choosing to assume that she knows she has places to be and things to do in her recent past, because hopefully that means this isn’t the last we’ll ever see of her…even if it’s probably unlikely that she’ll pop up again in Rebels.

While Ezra was inside the portal, Sabine was captured by Hyden, and despite the fact that Hera, Zeb, and Chopper were nearby, after what happened last week (and knowing that the series finale airs next week) I was definitely worried about Sabine’s survival. The dual battles toward the end of “World Between Worlds” – Ezra and Ahsoka running from the Emperor inside the portal/gateway while Hera, Zeb, and Chopper attacked the Imperials at the temple – had me on the edge of my seat. The animation and editing were amazing, and in my opinion the combination of the two made for one of the best battle sequences in the entire series (so far, at least). 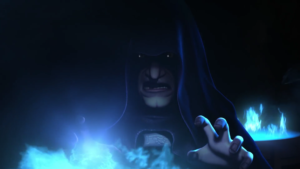 Ezra barely escaped the Emperor, whose access to the portal/gateway was questionable at best if you ask me. Again, I might have missed something, but it seemed like one moment Hyden was just figuring things out and the next the Emperor was attacking Ezra and Ahsoka. If this isn’t a plot hole, or even if you have an idea as to how/why the Emperor suddenly had that access, please leave a comment below!

The temple on Lothal seems to be gone for good, which thankfully means that portal is too. Of course this is unfortunate in that it means we also won’t see Kanan again (I mean, I suppose it’s possible, but both Hera and Ezra made comments that he was gone for good, so I’m guessing he won’t be popping up next week)…but hey, at least we got some good Chopper action in both “Wolves and a Door” and “World Between Worlds”. He got to ride in a loth-wolf’s mouth, to project Thrawn in order to trick the troopers whose suits Ezra and Sabine needed, and to use a giant machine to herd troopers away from the fight at the temple. Y’all, Chopper is my hero.

With just two episodes left of Star Wars Rebels, I wonder what else they’re going to be able to wrap up…but one thing’s for sure, even if I wasn’t in love with this week’s episodes, I’m still going to be sad when Rebels is done for good.

Previous:“Along With The Gods: The Two Worlds” To Debut On Digital, Blu-ray Combo Pack & DVD April 10!
Next: Boruto: Naruto Next Generations Manga Issue 21 Review – How You Use It