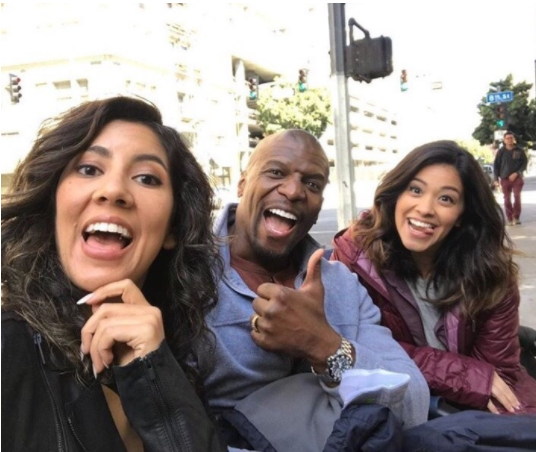 Brooklyn Nine-Nine on Fox is definitely one of the best comedy shows out there. And it keeps getting better each season. Now, the talented Gina Rodriguez has joined for a guest spot and of course, everyone is hoping she’ll play Rosa’s girlfriend!

According to Entertainment Weekly, Gina Rodriguez is currently set to guest star in one episode of Brooklyn Nine-Nine, which is in its fifth season. The show aired its mid-season finale on December 12, 2017.

Why does everyone think Gina will be playing Detective Rosa Diaz’s girlfriend? Well, because it makes sense and would be an awesome thing. There are also a couple of hints from Gina suggesting that fans will soon get what they want.

Um…can I get an audition @Brooklyn99FOX ?!? *applies lip gloss and puckers lips* @iamstephbeatz you know I’m ready and on the sidelines like Go Rosa Go! https://t.co/MMsY5MUvfs

Rosa (played by Stephanie Beatriz) came out as bisexual on the show’s 99th episode. The writers did an impressive job of allowing Rosa to open up to her teammates while staying true to her character. While she did face some negativity from her parents as the season continued, Brooklyn Nine-Nine showed that things will work out for the best.

We do know that Rosa has a girlfriend. But she hasn’t appeared onscreen — yet. Having Gina and Rosa has a couple on the show will do wonders for queer representation. So, fingers crossed.

And if that doesn’t happen, I’m still happy to see Gina’s star power rise. The Jane the Virgin actress recently starred opposite Oscar-winner Natalie Portman in Annihilation. She’s also set to star in and produce Netflix’s romantic-comedy Someone Great.

You should all go and watch Brooklyn Nine-Nine if you haven’t already. It’s a great show.

Are you a fan of Gina Rodriguez? Are you looking forward to her guest spot in Brooklyn Nine-Nine? Let us know.

Previous:Don’t Starve Mega Pack Coming To PS4 and XBox One This April