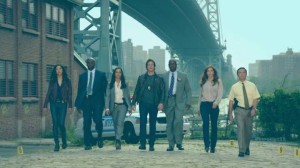 The police comedy ‘Brooklyn Nine-Nine’, by NBC, premiered on September 17, 2013. At first I didn’t enjoy it, maybe I was expecting too much from Andy Samberg.  But after watching it for three more weeks I got the hang of the story, the characters, the execution, and I was hooked. The show is an amazing representation when it comes to diverse characters and humor that doesn’t drive from stereotypes.

The show is led by Andy Samberg who plays Detective Jake Peralta. He comes across as a childish, sometimes annoying, detective who is, however, quite talented. Later we get to know that his behavior is because of his father abandoning him and his mother when he was a child. That’s what I like about the show. It gives layers to the characters as the season progresses and that helps the viewer understand why a character acts the way they do.

Jake has two bosses, and that’s where the diversity comes in. There’s Captain Ray Holt (Andre Braugher), the new Commanding Officer of the Precinct, and Detective Sergeant Terence (Terry Crews). Both are African-American characters in power and Captain Holt is gay with a partner named Kevin. The way these characters are portrayed on screen is a treat to watch.

Captain Holt keeps his private life separate and the humor comes from his robotic demeanor and the way he handles the Precinct. A few episodes also addressed the hardships he had to face in his professional life because of being gay and black, but there has never been a moment in the show where the humor was derived from a gay or black stereotype. The same is the case with Detective Terence. The humor comes from his character and his inability to shoot a gun after his wife gave birth to their daughters, and how he tries to overcome his fears.

The show also has amazing female characters, two of which are Latina. There’s Detective Rosa Diaz (Stephanie Beatriz) and Detective Amy Santiago (Melissa Femero). Both are portrayed in the show as just as good or bad when it comes to their job as the male characters, and have the same amount of authority as their male counterparts. It’s refreshing to see female characters not being portrayed as just love interests for the male cast and actually having their own lives and roles that add to the plot. The female characters don’t need males to protect them. They are detectives and can handle the cases they work on. They also don’t have over exaggerated ‘Latina’ accents and aren’t presented as ‘eye-candy’ for the viewers. My favorite female character is Gina Linetti (Chelsea Peretti), the administrator of the Precinct. The actress knows how to deliver her lines and state the obvious in a humorous manner.

Brooklyn Nine-Nice is a show that doesn’t need to use gender, race, or sexuality to make jokes. The humor is derived from the situations the characters find themselves in, and that’s a plus in my book!

The show aired it’s 16th episode this week. Have you watched Brooklyn Nine-Nine? Please share in the comments.