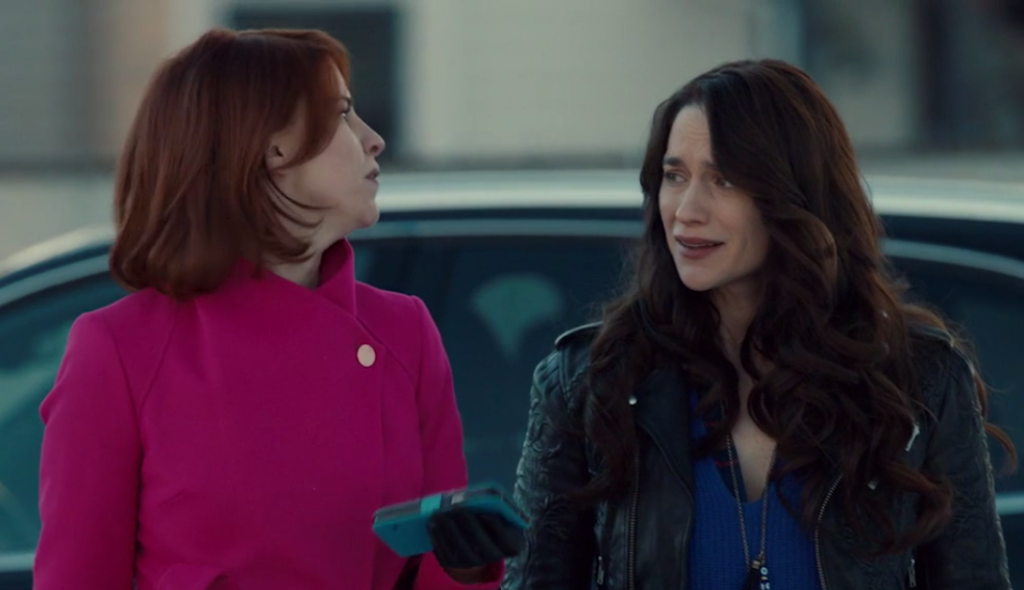 The uneasy partnership of Black Badge and Team Earp gets off to a rough start in “Shed Your Skin”. Also, uh, Waverly? What are you doing, girl?

“Shed Your Skin” opens with a reminder that Wynonna Earp knows how to dodge the dreaded male gaze. If last episode’s “ladies in underpants” fight didn’t convince you, maybe this steamy shower scene will. I feel like this production crew should be group teaching- Well, is “Creating For Viewers Who Can Enjoy Things Without Gratuitous T&A Shots” a class? It should be a class.

Nicole is still upset with Waverly over the whole “excluding her from the blood oath” thing, which I don’t get. Not forcing your girlfriend into signing a possibly demonic pact seems like Relationships 101 for me. However, I do get why she’s upset over being cut out of supernatural cases entirely. Not cool, Waverly. Surely they could have found a workaround so Black Badge wouldn’t discover her involvement.

Purgatory has two new occupants: Lucado and lab tech Jeremy, who adorably turns out to be a Doc Holliday fanboy. Lucado’s shiny new demotion hasn’t made her any more pleasant to be around. She’s riding Wynonna to produce results – specifically, dead demons – before Moody decides to pull an Eliza on them.

Weirdly, Wynonna seems to get her voice mail every time she tries to call. Team Earp (plus Jeremy, who Wynonna isn’t sure about) convene at the house to dissect a demon and plot. The two living Earp sisters take a break to worry over Wynonna’s fear that Willa is haunting her. Then they take another break to burn all her things, because fire is a good way to solve problems. (Note: Fire is usually not a good way to solve problems, kids. Do not try this at home).

Except Wynonna is not the only one being haunted. Her fellow high school bad girl, Mercedes Gardner, has returned to get revenge on the judgey citizens of Purgatory by buying up chunks of real estate (turns out mass poisonings affect property values). Instead of sweet economic vengeance, her first project is giving her the same creepy experiences Wynonna’s been having.

Side note: the Good Ship WyDoc is still sailing through rough waters. Doc is understandably still upset over The Kiss (from last season’s “Kiss and Tell”, if you’ve forgotten). It doesn’t seem like anything Wynonna says could make this better, especially not the awful things she does say. Doc’s so much older than her, he must see through her act to the pain. He’s got some pain of his own, though, so who knows when they’ll hook back up.

Back to the A plot: Meredith gets cornered by Baby Bug Demons and calls Wynonna for help. Clever girl there. The Earps show up and save the day off screen, because more than one BBD fight would strain the effects budget. Waverly escorts Meredith to her car while Wynonna pokes around in a dark basement with Earl, because Earps make awesome life choices. Absolutely no one is surprised when Wynonna and Waverly end up smashing a nest of BBD eggs, or when they deem the job done and take off.

It’s not really done, of course, and they missed something very bad. Something that came through the newly-cleared bug nest to do who knows what with a mysterious seal in the floor. “Shed Your Skin” isn’t going to fill us in on what caused this, either.

Unsurprisingly, Wynonna has a bad feeling. She confides this in Doc, who is less than attentive. Why? Seems he’s been busy blackmailing Lucado in order to set up a saloon, which is also home to some mysterious science happening in the basement.

Waverly isn’t much help with Wynonna’s foreboding. She and Nicole have made up (because sometimes we CAN have nice things) and she begs off Earp Porch Bonding Time to get in some more cuddles. Instead, as soon as Wynonna leaves she opens the fridge and does something that makes all of us throw up in our mouths a little.

I think we can firmly put the black eyes on the Things That Are Bad list now.

What did you guys think of “Shed Your Skin”? Will Wynonna be able to pull Team Earp together without Dolls’ leadership? What is Doc trying to reverse engineer (pretty sure it’s the serum but anything goes with this guy)? Why doesn’t Lucado answer her phone? Share your thoughts in the comments section below!

Previous:“Marvel Legacy” Issue 1 Will Introduce The 1,000,000 BC Avengers Team This September!
Next: Attack on Titan Season 3 Announced for 2018!