This was the first explicit Yaoi I’d ever read. When I started lending this series to friends in high school I became known as the ‘Yaoi Dealer,’ which is a title I was pretty proud of. As I went to a pretty conservative school, it was a risky game, but I’m happy that I at least got to spread the love of Yaoi among my fellow anime and manga fans. Though the manga is more explicit, it still has the magical floating white orbs over all the naughty bits, so it’s most intense scenes are still a hair shy of being considered pornography. Still, this is a mature story not only for the near pornographic scenes, but for the violence, crime, and abuse present throughout the narrative. There’s also moments that could be considered dubious consent, but for our main pairing we are given a look inside their heads and it’s made clear that everything is consensual for both parties involved.  One of the characters is struggling to come to terms with his own sexuality and feelings through a lot of the story, but there is nothing non-consensual about their interactions. 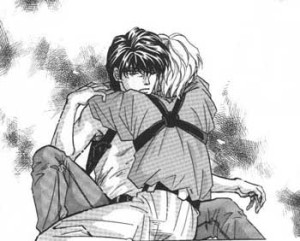 The OVA is actually my least favorite story from the manga and not nearly as explicit, but it’s still a nice slice of their relationship. I would, however, highly recommend the manga series over the OVA. The manga is a slow burn romance. The series revolves around two NYPD detectives, Dee and Ryo. Dee is very outgoing, firmly bisexual with no shame, and fiercely loyal to those he considers family. Ryo is a bit more reserved, unsure of his own sexuality, but still a badass cop that will go all out to get the job done.  Dee is immediately attracted to Ryo, and Ryo’s own uncertainty, but budding feelings for his partner create an incredibly touching relationship.

Another thing that makes this manga stand out is Dee’s constant insistence that he’s bisexual.  He likes both men and women and doesn’t hesitate to correct people when they assume that he likes only one or the other.  It’s refreshing because most stories make sexuality something that needs to be inferred simply by observing who the character is sleeping with, but that’s not the case here.  Dee’s straightforwardness and confidence in himself means that everyone knows exactly who he is.  As a bisexual myself, this personality trait is something I admire about Dee.  I don’t always like how pushy he can be with Ryo, but his insistence on making sure his own sexuality isn’t misinterpreted gives him some points in my book.

Fake will always hold a special place in my heart for being the ‘first’ of the genre for me, but also for creating a pairing that stuck with me for many years even after I (temporarily) fell out of anime fandom and moved onto other media.  It ranks very high on my list of OTPs.

Who doesn’t love vampires? How about a cyborg vampire with a cyborg dog? What if that cyborg vampire had complex feelings over his super sexy and sassy vampire master? That, my friends, is Vassalord. The OVA covers the first story, which isn’t very heavily yaoi oriented, though you can definitely tell the two share deeper feelings for one another than what’s portrayed on screen. The feeding scenes are rather erotic, but that’s the case with most vampire fiction really. The manga does feature a sex scene, though, even if all the bits are conveniently hidden.  For that reason, this recommendation is being categorized as mature.  There is also violence and gore because, hey, this is a piece of vampire fiction after all.  That goes with the territory. 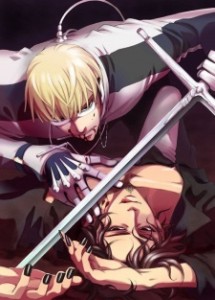 The cyborg vampire, Chris, has deep religious feelings and starts off with an ambiguous love/hate relationship with his creator Rayflo. His first introduction is stabbing Rayflo from behind and ripping him in half, which Rayflo recovers from quite easily. A few pages later Chris is feeding from Rayflo and it’s revealed that this is a regular occurrence for them. Chris refuses to drink from anybody other than his creator due to his faith in God and unwillingness to hurt other people.  This scene is portrayed in both the OVA and the manga, but due to the OVA’s brevity we really don’t get a sense for the depth of their relationship or just how long interactions like this have been going on between them.  Their love for one another is deep, but the OVA barely scratches the surface.

The two also have adorable nicknames for each other, which makes this whole introduction scene even more hilariously off kilter. Rayflo calls Chris “Cherry” and Chris calls Rayflo “Master.” The interesting thing with this relationship is that we’re jumping into it after well over a century of interaction between them, so how they got to this point is revealed via dialogue and flashbacks in the manga.  We aren’t seeing a new relationship blossom, but rather an already existing relationship strengthen.  Going forward they grow even closer than they ever have been before as they fight against a common enemy that threatens both of their lives.

They are one of those couples that balances each other out due to their different, but complementary personalities. I adore Cherry/Master and wish the manga would continue. At the moment it’s 53 chapters long and has an incredibly fleshed out story that kept me glued to the pages for several days. I highly recommend this manga.  It’s an intense story, deep relationship, and well fleshed out mythology that’ll suck you in very quickly.

That’s it for this installment. Stay tuned for more recs!

Previous:DashCon Follow-Up: Random Acts Partnership Didn’t Exist, But Was DashCon Really a Scam?
Next: Love Stage!! 1×01 Review: The Door to My Dreams