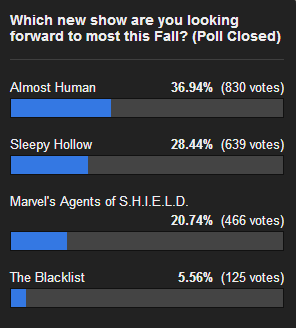 Almost Human wasn’t on my radar.  At all.  And I don’t know why really considering I’m a huge fan of science fiction and I loved Karl Urban in Star Trek, but this just slipped through the cracks.  When I was making the list for our recent poll I just Googled what new shows were coming out and included it not really expecting it to explode like it did.  I figured S.H.I.E.L.D. would dominate the poll, perhaps with Sleepy Hollow in a close second as it has just premiered and blown up on Tumblr.  About a day into the poll the Almost Human fandom showed up and gave the two already premiered shows quite a difficult uphill battle.  There were only a few hours here or there where Almost Human wasn’t in the lead during that entire week.  So congratulations.  You have our attention.

For the uninitiated, let me tell you a little bit about this new show we’ll be covering…

First of all, the trailer.

It’s 2048.  Cops work alongside robots.  The robots use logic to help humans in the field, which ends up leaving out the crucial emotional component that many humans hold so dear.  Urban plays John Kennex, who has a synthetic body part after being shot in the leg.  This is just a terrible bit of luck because he hates all things robotic (probably due to the bad experience hinted at in the trailer).  Honestly, this kind of sounds like I, Robot, but the robots look human and the role of Will Smith is played by Karl Urban.  But don’t take that as a negative criticism.  The idea behind I, Robot was very good, but I just wasn’t a fan of how it played out on screen.

One of the things I think Almost Human has going for it that I, Robot didn’t is the ability to get attached to the characters over a longer period of time.  Television allows for the slow unraveling of a characters past over the course of many weeks, revealing hidden depths and character quirks that you just don’t get in a two hour long film.  That’s why most of my favorite movies tend to be part of a larger franchise (Marvel Cinematic Universe and Stark Trek, I’m looking at you).  Will this show do that?  I don’t know.  But it has the potential to do so.  The fact that the robots look human also gives us a bigger potential for connecting to them (or at least to Dorian, the robot with FEELS).

Based on the trailer, it also looks like there’s a pretty good chemistry between Urban and Michael Ealy, who plays Dorian.  The trailer is only 3 and a half minutes long, though, so who knows if this is just a highlight real of their best moments.  But assuming that this is an accurate representation of what the show has to offer, I’m very much looking forward to them playing off each other.

So here we are.  I’ve gone from not having heard of the show to being ready to dive into the fandom head first.  That’s the power of polls.  So who’s going to join me on Monday November 4th?

Previous:AWA: My First Anime Convention
Next: Watching Taken the Miniseries (part 10, the finale)