“3gatsu no Lion” Reminds Us That Loss is Real, and Sometimes Inevitable 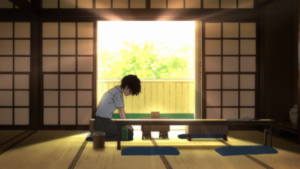 An underdog title that emerged from a competitive Winter 2016 line-up, 3gatsu no Lion distinguishes itself from other sports anime by focusing less on winning, and more on the heavy drama that hangs over humble lives.

3gatsu no Lion (alternatively, March Comes in like a Lion) follows Rei Kiriyama’s everyday life as a professional shogi player while he struggles with his own inner turmoil: a teenager who forced himself to grow up quickly and compete in an adult world. 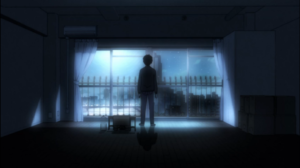 Rei’s studio apartment is humbly furnished only with a small kitchen, shogi board, and his futon that lays on the ground. The apartment has a balcony that faces directly towards a river. Water is a recurring symbol that means multiple things throughout the series, such as drowning and renewal.

Shogi, also known as the Generals’ Game, is a Japanese strategy board game that can be considered an equivalent to Western chess. Although more closely based on an earlier game that originated from India or China, shogi still works similarly to chess by designating specific roles and “skills” to pieces that determine gameplay and a player’s path to victory. Despite this similarity, the game is intrinsically Japanese, having failed to gain momentum overseas as playing is dependent on reading characters to identify specific pieces. As with any other competitive game, shogi is treated very seriously, sustaining whole livelihoods for many who participate in tournaments as professional players. Departing from other sports series, however, 3gatsu no Lion treats shogi as a very minuscule aspect to the crux of the series. In fact, it is hardly about shogi.

Like many anime protagonists, Rei’s orphaned status has thrown him into a trajectory to find answers to all of life’s questions by himself; what differentiates him from other protagonists is that the motivation to do so is not exactly all there. Compared to the average young, fiery, shounen protagonist driven to avenge his dead parents and rise from his scrappy life, Rei is anything but. It is made clear that Rei could care less about the concept of shogi itself, but rather, is complacent to the stability of a career and simply surviving. Rei does not desire a throne to sit atop and shame his slain enemies; all he wants is the financial means to keep walking along a path that does not have a foreseeable end.

Proven with Shinji Ikari in the Neon Genesis Evangelion franchise, which is revered for its deconstruction of the mecha genre, the psychological impact of thrusting a young teenager into adult situations has very real consequences. Rei is not determined and driven by his dark past to keep driving on. Rei is clearly depressed and insecure, often questioning his motivations as to why he has accepted shogi as his savior. 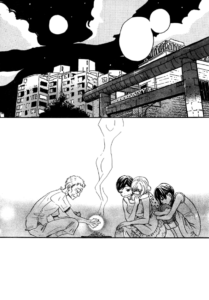 Like Honey and Clover, 3gatsu treats sentimentality and empathy in the face of tragedy and rejection as sacred, even if it means one’s own happiness is to be unrequited in exchange for lessons to be gained.

Chica Umino debuted 3gatsu no Lion in 2007, but she is more famously known for having created Honey and Clover (which was still running at that time). The slice-of-life about young, Japanese creatives shares similar themes to 3gatsu as they’re both comprised of characters aimlessly finding resolution in their chosen fields – and possibly romance in their lives. Heartbreak and loss is inevitable, but in the face of such tragedies, one can only grow.

Loss in 3gatsu is treated as both literal and abstract. Across the river from his apartment resides another source of light in Rei’s life: the Kawamoto sisters, comprising of Akari, Hinata, and Momo. The eldest, Akari, has subordinated herself to the role of housewife, carrying on the role of the family’s mother and grandmother who passed away prior to start of the series. With only their grandfather left and a father missing in action, Akari carries the burden of being the responsible one. Providing guidance when Hinata faces middle-school crushes and ensuring Momo gets picked up from preschool on time, Akari had to learn to become her own mother. Death affects everyone, some symptoms more visible than others. To the Kawamotos, mourning is shown in the form of selfless, familial love and accountability. To Rei Kiriyama, loss’s end product was only negative: the literal loss of his biological family and the more abstract, emotional collapse of his step-family.

To that extent, loss cannot be escaped with winning. Rei eventually realizes that the consequences of winning simply means someone else has to lose. After having been orphaned, Rei’s push into shogi was a result of his upbringing with his step-family, a family driven by the patriarch’s career in the sport. Rei’s winning streak and prodigal-like ability tears the family apart in what seems to be favoritism by his step-father, who begins to neglect his own children. Rei’s step-sister, Kyouko, is a recurring character who continues to both mentally and physically haunt Rei as a reminder that his past cannot be escaped in the present, blaming him for ruining their lives. Success doesn’t mean freedom from failure. 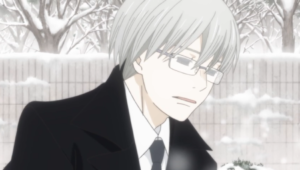 Rei remembers a time in his childhood where he literally crosses paths with Souya. The young Rei deeply analyzes the older man’s features and subtleties as he walks by him, mesmerized by a reflection of his future. Neither character acknowledges the other, silently resigned to their respective trajectories in time.

This definition of loss can also be said for the concept of losing one’s self: which can be said for even the other shogi players present in the series. Rei often sacrifices his health and lost his childhood at the cost of getting better at the game. Touji Souya, the current meijin (essentially, a champion player) was deliberately designed to look like Rei because he is his parallel and warning: Souya similarly thrust himself into shogi young, losing his childhood and appearing to have lost himself in the process, becoming a literal shell. His personality is described as very enigmatic and mysterious. Other characters describe how “ageless” he seems, his ethereal nature expressing that he is no longer of this world.

On the other hand, failure is necessary for success. Harunobu Nikaidou, is a rambunctious, wealthy peer who has thrown himself into Rei’s life as both a rival and technically, childhood friend. His first real loss in a shogi game to Rei becomes his awakening to become better, also representing a constant reference to the actuality of his frail health. In 3gatsu, loss carries a huge metaphorical weight in pushing the development of its characters, whether it be a loss in a shogi game, Rei’s childhood, Akari’s ambitions, or Kyouko’s family. Everyone faces inner turmoil despite what is visible on the surface, all differing in responses to loss in their respective lives.

Kyouko is the epitome of a dangerous beauty: she verbally abuses and manipulates Rei as he hangs on to the guilt he carries for feeling he contributed to the destruction of her family. Shots she is in accentuate her attractiveness through her flowing, red hair, while creating an almost dream-like vignette that suggests this is all a front to hide the insecurities she has inside.

With the series animated by Studio Shaft, these different emotional states are visualized excellently in the studio’s signature of experimentation: saturated colors, exaggerated, unconventional angles, and deforming art styles. On what’s appropriate for 3gatsu, Shaft carefully balances reality and theater to thread sensitive, tender moments compared to other series on their track record. Shaft has been more recently known for handling the anime adaptation of the Monogatari franchise. Based on an ongoing series of light novels, the story follows Koyomi Araragi, a high school student who finds himself getting involved with all sorts of girls involved in the supernatural and fantastical. Unlike the stronger, more realistic drama faced in 3gatsu which requires empathy and humility, Monogatari is riddled with fantastical designs and animation, riddled with fanservice to play on concepts of voyeurism and fetishism (the main character himself is exaggerated as a sexual deviant.) 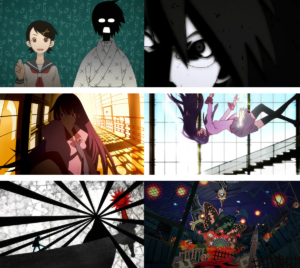 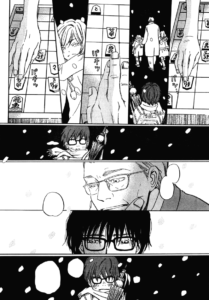 There are no real antagonists in 3gatsu no Lion. Everyone faces inner demons and challenges they must overcome.

As many fables have repeated to us before, 3gatsu no Lion is no different when it comes to reminding us that time persuades recovery and healing.  The series’ title itself comes from the idiom, “March comes in like a lion, and goes out like a lamb” which references March’s transition from cold, harsh weather into spring: despite how tough things seem to start off, it will get better later. This is not a subtle foreshadowing towards Rei and other characters’ development, but is additionally a deliberate message to the audience to seek their own solace as they look into the window of these character’s lives. More visibly, throughout the series, Rei juggles his attempts to go back to school with wanting to maintain his shogi career. Acknowledging his greater distance to his younger classmates, growing up and restarting a childhood he never had goes hand in hand. As Rei tries to find resolve by rewinding time, time still must move forward. Seasons visibly change per chapter of the series’ progression and holidays are referenced. The ambiguity of time between Rei and the Kawamotos losing their loved ones becomes just as non-apparent as the agelessness of Touji Souya: at a certain point, the hurt will stop. 3gatsu no Lion reminds us that the seasons cycle and all are necessary, but at the very least, winter will eventually transition into spring.

3gatsu no Lion is expecting a live-action film adaptation to release this March, with a second part to be released in late April.

Elvie is an animator based in the NYC-metropolitan area. She graduated with a BFA in Animation at the School of Visual Arts. In truth, she might be a total weirdo for trying to make a living deconstructing cartoons and video games, but you’d be a fool to think that would stop her. She currently creates animated content for Mashable.

Previous:4A Games Reveals New Details for Oculus Touch Exclusive “Arktika.1” VR Shooter!
Next: The “How To Draw Cool Stuff” Series Is Perfect for Beginners and Polishing Your Art Skills