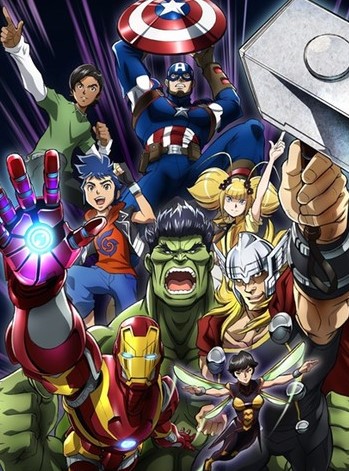 The Marvel anime fad is going to continue. The successful company has announced the creation of a new animated project titled Marvel Future Avengers.

Marvel Future Avengers will be targeted at young boys because apparently that’s one of the safest bets for toy sales. The upcoming TV series will air sometime this summer on Dlife. The story follows a kid named Makato who gains powers through an “evil gene manipulation experiment.” He joins a team called Future Avengers that also has other young superpowered kids, and are trained by Captain America, Hulk, Thor, Wasp, and Iron Man.

I guess they couldn’t call them the Young Avengers. Anyway, a manga series will also be released. Teruaki Mizuno will be drawing the manga, set to debut in the April issue of Shogakukan’s Bessatsu Coro Coro Comics Special magazine.

This isn’t the first time Marvel has given fans animes. The company teamed up with Madhouse to create Blade, Wolverine, Iron Man, and the X-Men series. All four animes aired in the US on G4. They were released by Sony Pictures Home Entertainment on DVD back in 2012.

While I’m not a fan of Iron Man, I did enjoy watching his anime series, which ran for two seasons. The X-Men anime was enjoyable, too. It offered an impressive depiction of Storm’s powers, if you ignore how tired she got. I still hope we get a season two or the series continues with a reboot.

Two anime films were also created. There was Iron Man: Rise of Technovore in 2013, and Avengers Confidential: Black Widow & Punisher back in 2014.

Coming to another Marvel anime series involving young kids, Marvel Disk Wars: The Avengers premiered in 2014. Think Pokemon but with characters from the Marvel comic book universe. It was a mess.

At least, Marvel Future Avengers feels like it’ll keep the Avengers as actual characters rather than making the kids carry them around in small devices. No trailer for the upcoming series has been released yet.

What do you think of Marvel Future Avengers? Let us know.