New Anime “Marvel Disk Wars: The Avengers”…Taking it too far? 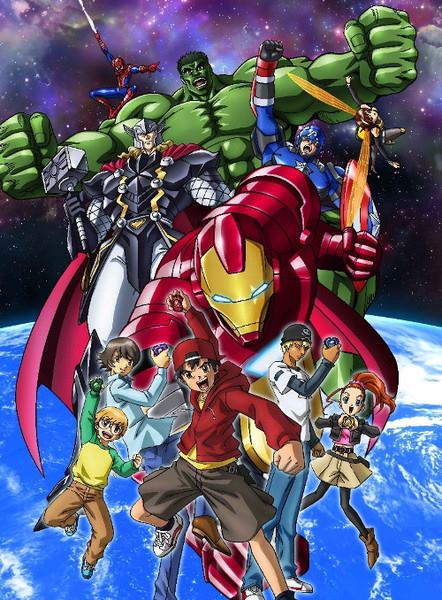 The animation department hasn’t been Marvel’s strongest suit (DC animation for the win!), but that hasn’t stopped them from churning out cartoons. Marvel Anime made its official debut back in 2010 with Iron Man, and the latest offering is ‘Marvel Disk Wars: The Avengers’. It might interest some, but for me it felt like something that shouldn’t have seen the light of day.

The fame of The Avengers can’t be denied, and the Marvel Cinematic Universe is ruling the box office. So, it makes sense for Marvel to milk the franchise for all it’s worth. Japanese Anime and merchandising is huge. Pokemon, Naruto, One Piece, are some of the numerous examples. The first ever Marvel Anime I saw was Iron Man, back in 2010. It was followed by Wolverine, X-Men (Immensely enjoyable, if you can get past the over sexualizaton of the female body), and then Blade. These series introduced the famous characters in the anime universe. The stories were familiar, and the personalities were almost spot-on. I’ve been anxiously waiting for another season of X-Men. So, when Marvel Disk Wars was announced, it piqued my interest. I thought it would be fun to watch The Avengers battle it out against Loki and other super villains. Having watched the first episode (aired in Japan on 2nd April), I couldn’t believe Marvel’s willingness to sell out their popular characters without any hint of dignity.

The official description of the series reads:

“In an all-out battle instigated by Loki, most of Earth’s super heroes and villains have been trapped inside disks—a new technology originally developed as portable security devices for capturing and securing villains around the world.

The Avengers team up with a group of teens to reclaim the scattered disk, and using their special abilities and techniques (waza), thwart Loki’s evil schemes to save the Earth from ultimate destruction.”

If the word ‘disks’ and ‘special abilities and techniques’  tingles your Spidey-senses, then you aren’t alone. What started out as an exciting new Marvel series, soon turned into a huge confusing mess. I couldn’t understand if I was watching Digimon, or Pokemon, or Yu-Gi-Oh, or a combination of every ‘capture the monster’ anime there is.

The Avengers get trapped in these ‘DISKs’/Digital Identification Security Kits (don’t ask me why I would remember something like that after a single watching), and fall into the hands of five kids. Together they have to capture all the Poke’mon…Oh! Sorry. I meant together they have to reclaim all the DISKs from Loki and prevent the destruction of the world. The series seems to be aiming at almost every kind of fan. I saw Iron Man, Captain America, Spider-Man, Hulk, Thor, Wasp, Doctor Strange, War Machine, Cyclops, and Beast in the first episode. It wouldn’t be surprising for more heroes to appear, if not in the anime, then surely in the merchandise.

It is obvious Marvel Anime created this series to sell merchandise to children, and probably some grown up Marvel fans, as well. So, if you see kids yelling ‘D-SMASH!’ and throwing around triangular disks, you now know what they are referring to.

I’m not saying the series doesn’t have some good things. As always, the fight sequences are cool, and the personalities of the characters are similar to their comic book counter-parts. Every hero got time to show off their powers. The human kids are interesting as well. They have their own personalities, and I got an idea about the personal journeys they’ll be making from the very first episode.

The Japanese version is already airing on TV Tokyo, and the series is expected to make its Western debut sometime later this year.

Are you ready to see The Avengers like you’ve never seen them before? Trapped in little Poke’balls…I mean, DISKs? Let us know in the comments!